Girls competing in the sixth-grade 100-meter dash get off to a start in Friday's City Grade School Track Meet at Charlie Merrifield Track.Pat Ryan photo

In the midst of a “down year,” Hillcrest rallied to score 441.25 team points and claim the school’s umpteenth City Grade School Track title Friday at Charlie Merrifield Track.

The meet had originally been scheduled for Wednesday, but a heavy snow left the infield soaked and organizers moved the annual meet to Friday, which was windy, but otherwise perfect f0r a track meet. 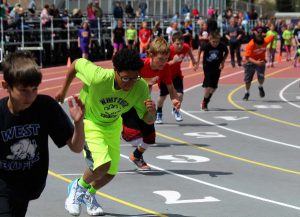 Runners in the boys’ 200 get off to a good start Friday. (Pat Ryan photo)

Hillcrest won the team title, and won a share of the sixth-grade boys’ pentathlete’s title, as Casey Kautzman tied with Margaret Leary’s Dylan Snyder for the boys’ individual award. 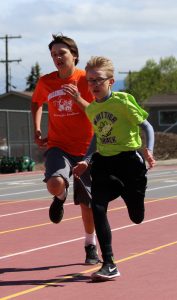 Jakob Nielsen of Whittier and co-pentathlete winner Casey Kautzman of Hillcrest battle in the final stretch of the boys’ 400 Friday. (Pat Ryan photo)

Stenson was tough in the longer runs, winning the 400 and 600, as well as the high jump, where she cleared 4-6 3/4. Butte Central’s Rileigh McGree was tops in the 100 and 200, while Thatcher won the long jump,Whittier’s Kieyrah Killoy took the standing long jump, and Hillcrest’s Mollee Conlan won the shot put. 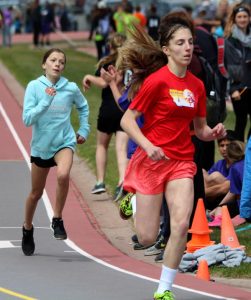 Mya Stenson of Margaret Leary races to the win in the girls’ 600 Friday. (Pat Ryan photo)

The sixth-grade boys saw Whittier’s Jakob Nielsen win the 200 and 400, while Butte Central’s Joseph Lyons won the 100. Trey Whitlock of Margaret Leary  won the 600, while teammate Dylan Snyder won the long jump and the high jump.

The fifth-grade girls saw a tough performance from West’s Emmarie Richards, who won the 100 and 200, while Margaret Leary’s Abby Mellott was victorious in the 400, 600 and the standing long jump. Sophia Parini of Hillcrest won the high jump by four inches, Makenna Bazo of Kennedy won the shot put and teammate Lydia Borduin was tops in the long jump.

Among the fifth-grade boys, Hillcrest’s Cooper McKee was the fastest in the 100 and 200, as teammate Max Kluck won the 400, 600 and the standing long jump. West’s Cameron Tobiness won the long jump, Sean Ossello of Margaret Leary won the high jump, and Wiley Dallaserra of Hillcrest was the top man in the shot put. 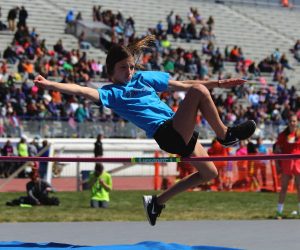 Grady Winston of West won the boys’ 100- and 200-meter dashes, while Jack Keeley of Hillcrest ruled the 400 and 600 races. Whittier’s Aspynn Vetter won both the 200 and 400, while Autumn Silk of Hillcrest won the 100 and teammate Hanna Kluck won the 600. Butte Central’s Ella Moodry had the top preliminary time by a long way in both the 100 and 200, but was unable to compete in the finals. 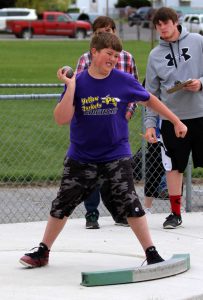