More importantly, the Copperhead senior led his team past an old rival.

Hill scored 13 of his points in the third quarter, and his last bucket late in the frame made him Anaconda’s all-time leading scorer. Hill now stands atop a legendary list of players with 1,700 points.

Going into the night, Anaconda great Ali Hurley’s 1,698 points were the most ever by a Copperhead.

“It means a lot,” Hill said of breaking the record. “It’s kind of always been a goal of mine growing up and playing high school. Doing it on Senior Night and against our rival is pretty cool.” 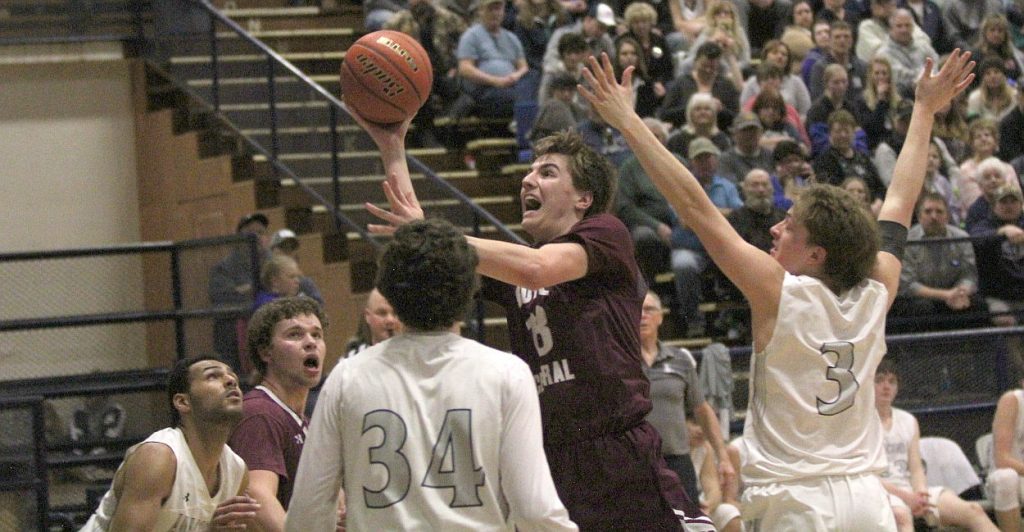 “There’s been moments this season when it seems like the other team plays with more energy and enthusiasm than we do, and I think you can probably say that about them tonight,” Kelly said. “In all the games that we lost, we lost the hustle battle.”

The Maroons scored the first five points of the second quarter to take a 16-14 lead over the Copperheads, a former division rival of BC.

That, though, was the end of the good news for the Maroons.

The Copperheads closed the half with a 15-2 run, and BC never led again. Anaconda took the lead for good by making 10 of 11 free throws in the final 5 minutes, 2 seconds of the second quarter.

“He drew a ton of contact,” Kelly said. “He initiates it, he gets you on his shoulder, and he gets to the free throw line. We had a tough time with him.”

“We didn’t shoot the ball well, but I don’t think we attacked it really well in the first half,” Kelly said. “We just kind of got random, and then we got methodical.”

Anaconda took a 29-18 lead into the halftime break.

The third quarter was all about Hill.

The future Montana Grizzly football player led the charge as the Copperheads busted the game open.

His contested jump shot with 1:50 on the clock put Anaconda up 44-26. The shot also tied Hill with Hurley. The next time down court, Hill claimed the record for himself.

The large, boisterous Snake Pit crowd gave Hill an ovation that lasted past BC’s Aaron Richards shooting free throws on the other end.

As the public address announcer pointed out the record — something the crowd already knew — BC junior Cade Holter congratulated the newest Anaconda legend with a handshake.

“It was pretty incredible, especially when he got hot,” said Anaconda coach Bill Hill, the father of Braxton. “He was pretty good tonight.”

“The difference was tonight that their players made plays,” Kelly said. “Hill just made a ton of plays and a ton of shots. He just made some really difficult shots, and he made them look easy.”

Micahael Galle added eight points for the Copperheads, who improved to 12-4 on the season. Bobby Swainston, who hit the floor repeatedly for loose balls, scored seven, and Zeke Buck scored six.

Kyle Gochanour and Trenton Mikalatos each scored four points. Mikalatos, a future Montana Western Bulldog, spent much of the night on the bench in foul trouble.

“We played really hard,” Braxton Hill said. “Everyone played together, and it was fun.”

BC also got five from Holter, four from Richards, two from Dylan Sestrich and one from Braden Harrington.

Jared Simkins and Trevor Neumann also contributed for the Maroons.

Central jumps back into Southwestern A play Saturday when the Maroons head to Corvallis to take on the Blue Devils.

Kelly said there’s no magic formula. The Maroons simply have to play better.

“We’re at the point in the season where we are who we are,” Kelly said. “You’re not going to be making a ton of adjustments to the way you play right now.

“We’ve been at our best when we’re the energetic team, when we’re getting the loose balls, when we play at the right pace.”