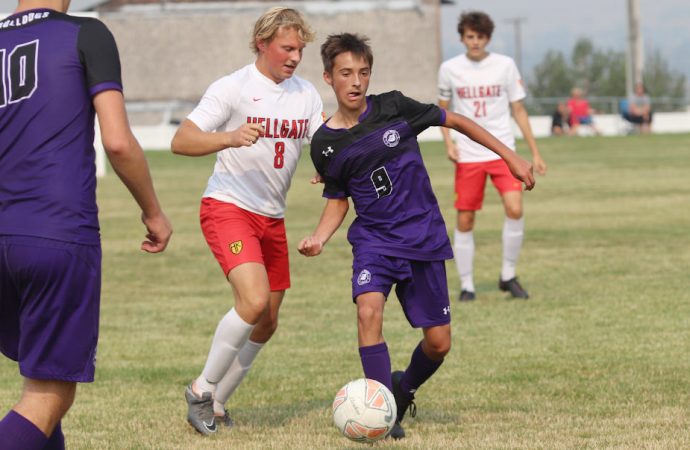 Butte High’s boys’ soccer team once again got a chance to see the very best in the state Tuesday at the Jeremy Bullock Complex.

Once again, the Bulldogs came away feeling pretty good with how they stacked up.

Missoula Hellgate, which has won four of the last five Class AA state titles, shot past the Bulldogs 8-1 in a Western AA match played in very smoky conditions.

Like with Butte High’s 10-0 loss to the undefeated Knights a couple of weeks ago, the score does not tell the story of the improving Bulldog squad.

“I think we played great,” Butte High coach Cody Carpenter said. “We played all 18 on varsity and it was better than last time. I think we play up to the competition.”

The competition was a team that has been putting a hurting on the Western AA throughout the first half of the season, which concluded Tuesday for the Bulldogs.

Reggie Duce, a 6-foot-2 senior, scored two goals and assisted on two more to lead the Knights to their seventh win in seven tries.

The lead was just 3-0 late in the first half. Then Butte High put together a nice run that ended with a goal by Cameron Tobiness.

Moosie Henningsen started the streak heading north down the west sideline, passing to Colton Case, who hit Adam Williams. Williams then made a nice pass to Tobiness and the sophomore slipped the ball past Hellgate keeper Aidan Anderson.

“That’s exactly what we’ve been working on,” Carpenter said. “Possessing the ball.”

While the Bulldogs continued their noticeable improvement from game to game, the Knights were just too good.

Thorne-Thomsen and Anderson scored quick goals — both assisted by Duce — the Knights extended the lead to 5-1 at the break.

“I think it’s the way they can possess the ball,” Carpenter said. “Really, it’s their touch. They are all fast, strong, tall, big, athletic kids who have great touch.

“We were linking together some sequences with four, five or six good passes, and then we’d have a bad one, and they’d take advantage of it. That was really the difference.”

The coach said he used the bench because the smoke was taking its toll on the players.

“I was planning to anyway, but because of the smoke, the subs played a little longer than they would have,” he said.

The Bulldogs fell to 1-6 with the loss. The team is back in action Friday with a trip to Kalispell to take on Glacier.

Butte’s next home match is next Tuesday against Missoula Sentinel.