Happy to be playing, Maroons head to Polson 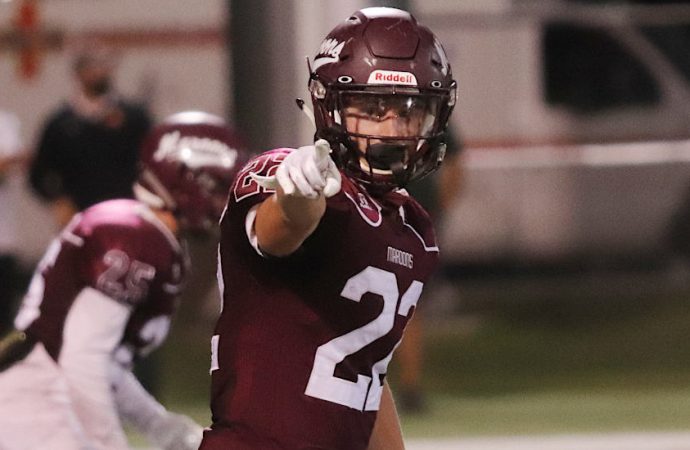 Butte Central's Joseph Sehulster checks with the side judge while lining up for a play in BC's Sept. 3 season-opening game against Frenchtown. (Bill Foley photo)

That is why BC scheduled a makeup game with Stevensville for Oct. 30, the same week that the scaled-back Class A playoffs begin.

Central’s young team missed out on three conference games and the serious developmental time that comes with those games. So, the Maroons picked up the game that likely will not draw a lot of attention around the state.

“It’s been tough on our young kids,” BC coach Don Peoples Jr. said. “We’re really hoping they can get some experience. This is our 10th week of football, and we’ve played just four games.”

Central will make it No. 5 Friday when they travel to Polson to face the Pirates in a Western A game. Kick off is 7 p.m. (Radio: KOPR, 94.1 FM, kopr94.net or on the KOPR app.) (Butte Central roster)

The trip will be the second of the season — and last — for the Maroons, who return home to play Columbia Falls before closing with the Yellowjackets.

The Maroons are 1-4 overall and 0-3 in conference, and that record includes a season-opening forfeit against Hamilton. BC picked up a game last week to make up for a conference game with Browning being called off, and the Maroons looked good in a 33-14 road win over Livingston.

Both touchdowns allowed were set up by special teams miscues. Once the game got tight with two Livingston touchdowns in the third quarter, the Maroons responded with two scores in the fourth.

That included a 96-yard drive that followed an interception by Drew Badovinac. Lineman Riley Gelling tipped the ball to his teammate.

The Maroons could use some drives like that if they are going to stop the high-powered passing game of Polson.

Sophomore quarterback Jarrett Wilson is ranked No. 9 in the nation with 2,434 passing years. He is completing 61 percent of his passes. He has 24 touchdowns and nine interceptions through seven games.

“They put up incredible yards in their passing game all season,” Peoples said. “It’s going to be a huge challenge. They’re throwing the ball between 55 and 65 times a game.”

Wilson has also scrambled for 258 yards and three scores.

“He’s elusive, too,” Peoples said. “He’s hard to get to. If you give him too much time or let him run around in the pocket, it’s not going to be a good deal.”

Even though the 3-4 Pirates have dropped three straight, Wilson has passed for more than 400 yards in each of the last two. He passed for 854 yards and 11 touchdowns in losses to Frenchtown and Bigfork.

Colton Graham, a 6-foot-2 junior receiver is ranked No. 27 in the nation with 839 receiving yards. He has hauled in 54 passes for nine touchdowns.

Junior Zavier Fisher has caught 43 passes for 433 yards and six touchdowns in an offense that Peoples called “sophisticated.”

Along with playing cornerback, Badovinac is Butte Central’s quarterback. Peoples said the junior and junior running back and defensive end Joseph Sehulster are questionable for the Maroons

If Badovinac can’t go, the Maroons have depth at quarterback in sophomores Luke Garrison and Rye Doherty. Doherty, a standout at safety, has been playing receiver, too.

The running game is in good hands with senior Egan Lester and junior Eyston Lakkala. Last week, Lester put up 167 yards for his third straight game rushing for more than 100 yards.

Lester has racked up 516 yards on the season behind a solid offensive line made up of linemen Gelling, Brian Holland, Ian Williams, John Crossman, John Fisher and Eric Hart. Tight ends Joseph Sehulster and Ty Driscoll are also a force in paving the way for the ground attack.

Lakkala added 82 yards on the ground last week, earning praise from his head coach who watched the game online.

Peoples, who missed last week’s game because he was self-quarantining because of a coronavirus contact not related to the team, will return to the sideline to lead the Maroons against the Pirates.

Defensively, Hart, Williams, Sehulster, Gelling and linebackers Garrison, Pochervina and Lakkala will be charged with getting after Wilson. Badovinac, Holter, Doherty and Lester will have their hands full in the secondary.

Peoples said the Maroons are playing with an eye toward next year. They are also trying to utilize the precious time left for team’s five seniors.

That is why the Maroons added the game against Stevensville and last week’s game at Livingston. It is why they will not take the trip to Polson for granted.

“It was a good experience,” of last week’s trip. “The kids are just excited to just get another game.”