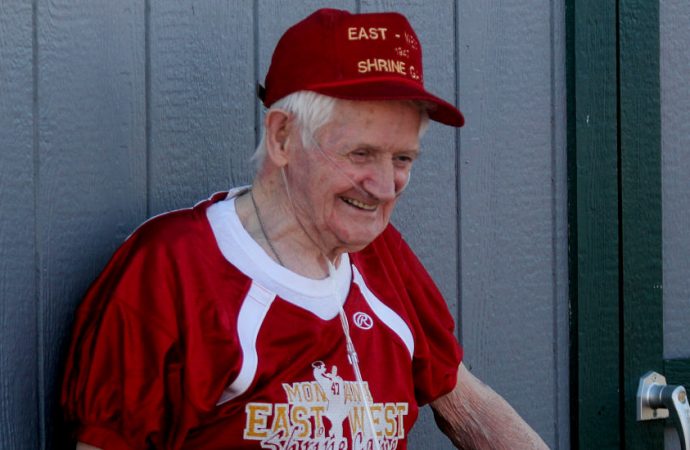 Bob Schulte smiles as he talks with the West Side players two days before the 2018 Montana East-West Shrine Game in July. (Bill Foley photo)

Butte Sports Hall of Fame member Bob Schulte passed away Thursday. He was 89.

His funeral service will be held Thursday, and current Hall of Fame members are asked to wear their Green Jackets to the funeral in honor of Mr. Schulte, who was inducted into the Butte Sports Hall of Fame in 2005.

Relatives and friends may call this Wednesday after 5 p.m. at St. John the Evangelist Church. Parish vigil services will be celebrated at 7 p.m. in the church.

Visitation will also be held Thursday after noon at the church. Mass of Christian Burial will be celebrated Thursday at 1 p.m. in the church. Interment will be in Holy Cross Cemetery.

Bob Schulte was a standout all-around athlete at Butte High in the 1940s. Schulte competed in football, basketball and track for the Bulldogs from 1944-47. Schulte was a two-year starter in football for the Bulldogs and was selected All-State both years. He led Butte High as the top scorer in basketball in 1947. Schulte was selected for and played in the first-ever Shrine Football Game in Great Falls in 1947. Many years later, after a number of his sons and grandsons had played in the game, Schulte was honored in 2000 with his number No. 13 being retired. He is the only player in the all-star game to have his number retired. Schulte was also an excellent bowler. He competed in 53 state tournaments and 12 national events. Schulte was picked and placed in the Butte and Montana State Bowling Hall of Fames in 1995.