While there were no living members of the 1943 team to honor as Diamond B’s, their team was mentioned as the Silver B’s gathered for their annual induction banquet at the Ross J. Richardson Memorial Gymnasium.

The dinner, which is always held directly before a Butte High game at Naranche Stadium, is as exclusive as a meeting of the He-Man Women Haters Club. No guests or family members are allowed.

A letter in any other sport will not get you an invitation. Even a football player who lettered 24 years ago would be tossed out like the guy who wouldn’t take his feet off the table in the movie “Casino” if he would try to crash the party.

You have to be a Silver B. No exceptions.

The exclusivity is part of what makes the organization great. No place else honors its past heroes like the Silver B’s of Butte High School.

Friday night’s meeting drew about 140 members ranging in age from early 40s to 90.

The oldest was Tom LeProwse, who will become a distinguished Diamond B next fall. LeProwse, who is also a sports legend in Bozeman, hasn’t missed a single Silver B’s dinner since he was first inducted.

You can count on him being there next year, too.

This year’s collection of Silver B’s and Diamond B’s was as impressive as ever.

Jon McElroy was there as his players from his final Bulldog team received the honor.

The legendary Sonny Lubick was there to see his 1968 players — none more excited than Paul Cutler and Sam Milodragovich — honored for their 50 years. Lubick, of course, is the legendary coach Colorado State named it’s field after.

Former Bulldog and former University of Montana head coach Mick Dennehy was there, too, looking as tough as could be.

Butte High’s current Bulldogs watched in awe as the former Bulldogs took the field before the game. They took their seats in the section on the 50-yard line, and watched as the Bulldogs went out and played their best game of the season in a 28-14 win over Great Falls High, a fierce rival with Bulldogs from 1968.

There was one man missing, though, and it was definitely noticed.

Bob Schulte, a 1947 graduate of Butte High School, passed away the night before the Silver B’s gathered at Naranche Stadium.

Schulte’s passing came two years before he was set to become a Diamond B, an honor he had looked forward to for many years. It was an honor so many of us couldn’t wait to witness.

Thirteen years ago, Schulte was inducted into the Butte Sports Hall of Fame for his stellar career as a football, basketball and track athlete for the Bulldogs. He was also a top-notch bowler.

Schulte was a two-year starter in football, and he earned All-State honors both of those years. He was also the top scorer on the Bulldog basketball team.

Shortly after graduating from Butte High, Schulte, along with LeProwse, played in the first Montana East West Shrine Game in Great Falls. 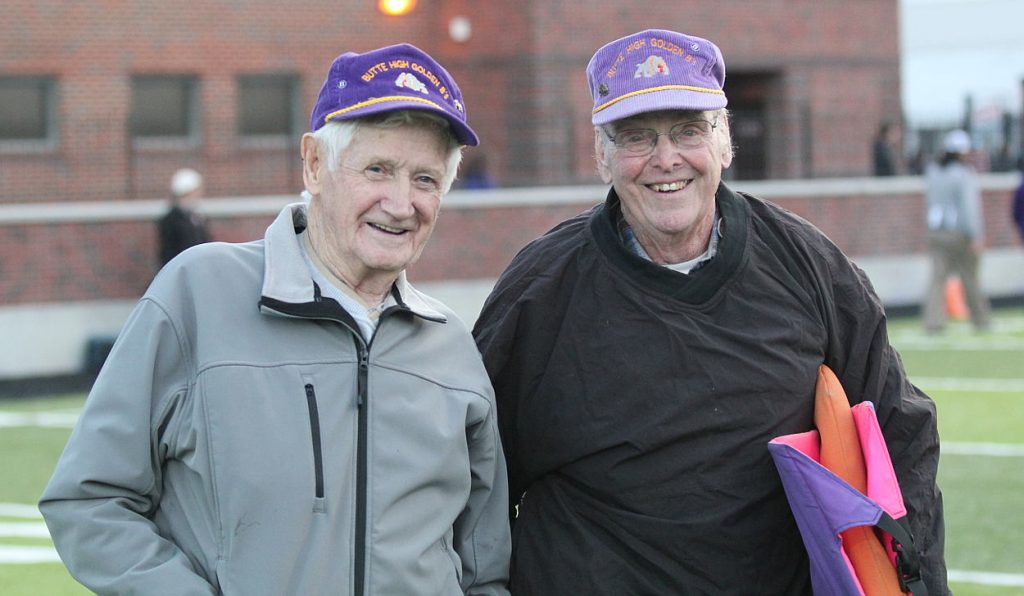 That was the first of many Schultes to play in the game, earning the family the distinction of being the First Family of the Montana Shrine Game.

Schulte’s impact on the game, which raises money for the Shriners Hospital for Children in Spokane, was so great that Schulte’s No. 13 became the only number ever retired in the Montana Shrine Game in 2000.

In July, Schulte wore that jersey as he leaned against a storage shed just off the field a Alumni Coliseum at Montana Tech. Holding the handle for his oxygen tank dolly in his left hand, Schulte told the 2018 West Side boys about his experiences and the true meaning of the game.

You will never see a group of young men more impressed and focused. The players and coaches hung on every word as they listened and asked questions of Schulte.

“You’ll notice Bob’s No. 13 jersey,” West Team Coordinator Jeff Hartwick told the players. “He’s the only guy who gets to wear that jersey. It’s been retired because of all Bob has done. There’ll never be another 13, East or West.”

The players didn’t have to do the math to calculate how many players have participated in the Shrine Game since 1947 to realize how impressive it was to be the only player to ever have his number retired.

They were looking at a legend, and they knew it.

Schulte instructed the players to not lose sight of what the game was all about before he took photos with Kasey Morely, a patient of the hospital who was happy to show Schulte his new thumbs. 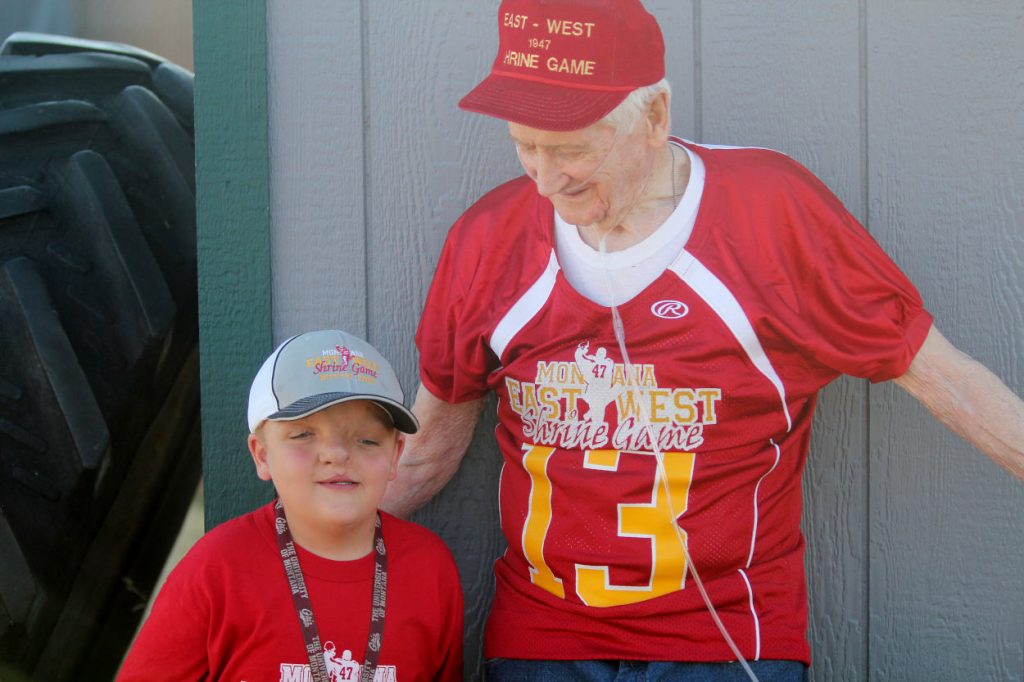 “There are no losers,” Schulte told the players.

Before he closed, Schulte made sure to point out that he was younger than LeProwse, his good friend and former teammate.

Then, Schulte shook off the silly notion that his failing health would prevent him from attending the 72nd Montana East-West Shrine Game in Great Falls.

Schulte said he would be there “Come hell or high water,” and he was. He attended the banquet and watched both sides lay it all on the line in 24-21 East victory.

On Friday night, Schulte was on the front of the minds of all the Silver B’s and Diamond B’s as they watched the inspired Bulldogs pick up a win.

As the Silver B’s remembered all the members who passed away since their last meeting, they had a special remembrance for Schulte.

That almost made the timing of Schulte’s death so perfect. The news of his death was shared with some of the people who mattered most to Schulte. They got to share their experience with the memory of Schulte, whose son Steve was on the sideline as an assistant coach for the Bulldogs.

He might not have been able to attended Silver B’s Night in body, but Bob Schulte was certainly there in spirit, as he will be for as long as football is played at Butte High School.

He will also be in the hearts and minds of all those who play in and attend Shrine Games for years to come.

Sadly, Schulte never hung around long enough to achieve his goal of becoming a Diamond B, and there is no doubt that was a goal that was very important to him. Only 12 men have ever achieved that honor.

That it meant so much to Schulte and still means so much to LeProwse tells us all we need to know about the honor.

It tells you everything you need to know about the organization that is the Silver B’s.

That why the Silver B’s Night is always and without question the best night of the year.

— Bill Foley writes a column that appears Tuesdays on ButteSports.com. Email him at foley@buttesports.com. Follow him at twitter.com/Foles74. Check out his NFL picks on Thursdays.

Memorials in honor of Mr. Schulte may be sent to the Shriner’s Hospital for Children, The Butte High Silver B’s or to a memorial of the donor’s choice.