To his left is Kinley, Scott and Kelcee Gurnsey, to the right is Keisha, Steve, Cora, Ryan, Alivia, Savannah, and Marry Joe Stosich. (Photo by John Robbins Butte Sports

Another local Butte boy inked a deal to continue his football career Wednesday morning at the Ross J. Richardson gym.

Camerson Gurnsey signed his letter of intent to play on the gridiron for another four years for the University of Montana Grizzlies, Gurnsey is a wide receiver and standout athlete for Butte High School.

I had a chance to visit with coach Grey about what kind of player the Griz are getting, “Cameron is an unbelievable young man, he was a 3 year starter for us and a multi way player, the Griz won’t be disappointed in their choice, a player like Cameron is hard to lose because he has just been so great for us these past 4 years, but we are all so happy he gets to continue his football career here in Montana.” 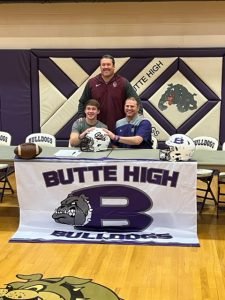 Although he won’t be wearing his dad’s number 21 jersey when he played for the Griz, Cam wants to create his own legacy but will be following right in his dads’ footsteps.

Scott Gurnsey was a Grizzly legend, who played receiver for the Griz from 1991-1994. Cameron wants to leave a legacy like his dad did, but on his terms. 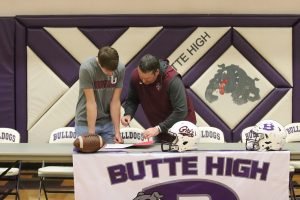 When I spoke with Cameron this morning, he said that “I grew up watching the Griz and of course my dad had a really big impact on my decision since he played receiver for them, I am really excited to be a Grizzly.” I also asked just how fast his high school career went by and what it feels like today as opposed to his freshman year, “you know, when I was a freshman, I remember the seniors telling me to enjoy it because it goes by in the blink of an eye, I didn’t believe them but now I found myself saying the exact same thing to the underclassmen this year. It’s cool when your dreams can become reality.” 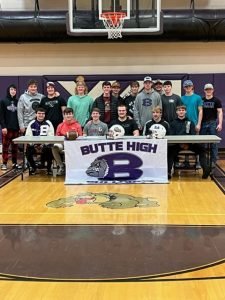 Cameron finished his senior campaign with 52 receptions for 769 yards, he averaged 14.8 yards per catch, and 69.9 yards a game, he also hauled in 7 touchdowns for the Bulldogs.

Cameron is undecided on what he wants to study, but whatever it may be we know he will thrive, we wish you the best of luck Camerson, Go Grizzlies!