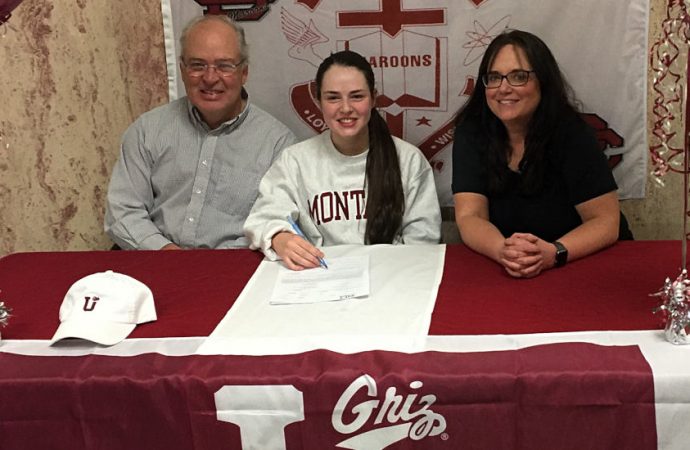 MISSOULA — Montana women’s golf coach Kris Nord added a pair of players to his program this month when Tricia Joyce and Emmy Sundby signed National Letters of Intent to begin competing for the Grizzlies next fall.

Joyce is a senior at Butte Central High, Sundby a senior at Stevens High in Rapid City, S.D. Butte Sports reported on the Joyce signing ceremony at the high school last week.

Both fit the mold of the type of player Nord is looking to build his program upon. In other words, they know what they’re getting themselves into by signing on to play for Montana.

“I want to find the best golfers I can, but I also need to be aware of our weather and how it might affect what I call their happy factor at school,” Nord said.

“Is it going to affect them to have to practice in the snow and cold and have to hit balls indoors for part of the year? I’m looking for girls who are used to that. Give me the same two golfers, and if one is used to the four seasons, I’m going with that person.”

It’s not a novel approach. It’s been a successful one for the Grizzlies for years. Olivia Weber (career stroke average: 77.75) was from Idaho Falls. Hailey Hoagland (77.80) was from Butte. Krista Swanson (78.02) was from Minnesota. And the list goes on.

Now comes Joyce, who is not only from the same hometown as Hoagland, the two have worked together during summers at the Rock Creek Cattle Company golf course near Deer Lodge.

“I don’t like to use generalizations, but Hailey was a good Butte kid,” said Nord. “She would have done well with or without a coach. She just had it together. Tricia is cut from the same cloth.

“She’s pretty much self-taught, which I like. She’s figured things out herself. She’s got a tough edge to her. That’s important in tournament golf, when I can’t be with every player. She’s going to figure things out and deal with them.”

Joyce did last fall, when she won every tournament she entered, highlighted by her first Class A state title, which she claimed by five strokes. It came after finishing second at the state meet as a freshman, third as a sophomore, fourth as a junior.

“In years prior, I felt like I put a little too much pressure on myself to play well,” said Joyce. “This year I wanted to play free and play my game. I just realized I have to have confidence out on the course, and it resulted in some good things this fall.”

Nord knew little of Joyce when he arrived at the Missoula Country Club in July for the Montana Women’s State Amateur. He was there to support one of his players, Teigan Avery.

But he couldn’t take his eyes off the player who would tie for third with Avery, three strokes off the lead. Joyce shot rounds of 74, 75 and 77.

“I really liked her before I even knew who she was,” said Nord. “I saw this gal who had great energy and was hitting good golf shots. Her energy on the course was real positive, and she had a spark about her that I love to see. I really liked how she approached competition.”

No one has yet seen Joyce in full, at least as a golfer. She plays basketball for her school in the winter and tennis in the spring. It won’t be until next fall that she finally gets to go all in on golf.

“I’m excited to dedicate a full year to golf. It’s fun playing basketball and tennis, but being able to commit will really develop my potential into being the best golfer I can be,” said Joyce. Only time will tell if she becomes the player Hoagland developed into.

“She’s awesome. I know she put in a bunch of hard work, and it clearly showed in her success. I just want to emulate her as much as possible. She’s an awesome role model to have.”

The same month that Joyce was in the mix to win the Montana Women’s State Amateur, Sundby traveled to Colorado for a Rocky Mountain Junior Golf Tour event at Broken Tee Golf Course.

It wasn’t a tournament Sundby had planned on competing in, and that didn’t give her enough time to get anxious about her results. So she just played, and played well. She won with scores of 70 and 73.

“I went in with an open mind and just felt at ease. Everything felt good and was on point those two days,” said Sundby, who learned the same lesson Joyce had, which led to Joyce’s breakout fall season.

“It was definitely something to learn from. I really wish I could do that every tournament.”

Unlike Joyce, Sundby’s senior-year state tournament won’t take place until next spring. She tied for third at the Class AA meet last year, improving upon her 15th-place showing as a sophomore.

“I saw she had some interest in Montana, so I went in and looked at her bio and swing. I liked what I saw. She’s tall, she’s athletic. She’s long in terms of levers, so she has real easy power. Her upside is big in my mind,” said Nord.

From Sundby’s end, it wasn’t about the location or name of the school that mattered as much as she wanted the right coach.

It won’t be the realization of a long-held dream for Sundby, who also played volleyball through her junior year at Stevens High. Rather, it’s the result of falling in love with the sport of golf. The more she played, the more she loved it, which made her want to play it even more. Which led to Montana.

“For me, it was discovering my love for the game. That’s what took me to the collegiate level. I didn’t dream about playing collegiate golf, just to play golf, and that process led me to college golf,” she said.

Nord has just one senior on his current team: Baylee Barckley. “We wanted to make sure it was a good fit on both ends with the players we’re bringing in, and I think it’s two great additions,” he added.