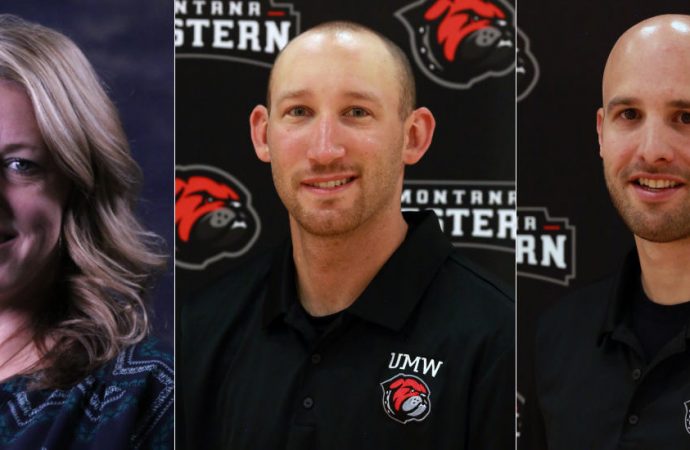 From left to right, Brooke (Cushman) Henze, Kaleb Birney and Casey Parrott are shown in these courtesy photos.

Brooke (Cushman) Henze of Lewis-Clark State College (LCSC) was selected as the Frontier Conference Athletic Director of the Year in a vote of the conference athletic directors. Henze is in her third season at the helm of LCSC athletics.

From 1997-2001, she was a member of the Lewis-Clark women’s basketball team. Those teams advanced to four straight national tournaments and the school’s first ever national semifinal appearance. She graduated in 2002 from Lewis-Clark and earned a master’s degree from Gonzaga in 2007.

Henze has been the director of the Avista NAIA World Series since 2011.

She has won numerous awards including the 2019 Women’s Leaders in College Sports Administrator of the Year in the NAIA. She is married to Mike Henze. They and her son, Parker, reside in Clarkston, Washington.

Kaleb Birney of Montana Western was selected the Frontier’s Athletic Trainer of the year. He is in sixth year as a Bulldog athletic trainer and entering his fourth season as head athletic trainer. Birney is the primary athletic trainer for volleyball, rodeo and men’s basketball while overseeing all sports.

His résumé includes a stint at Georgia State University as an interim athletic trainer for men’s soccer, football and baseball and internships with the NFL’s Kansas City Chiefs and his alma mater. Birney graduated in Wichita State in 2012 and a masters from California University of Pennsylvania in 2014.

In 2019, Birney was the recipient of the National Athletic Trainers’ Young Professional Committee’s National Distinction Award and in 2020 the Northwest Athletic Trainers’ Association New Horizon Award. He is certified as a Performance Enhancement Specialist, Corrective Exercise Specialist and in first aid/CPR and Sound Assistant Soft Tissue Mobilization.

He is the Public Relations Chair for the Northwest Athletic Trainer’s Association and a member of the Montana Athletic Trainers Board of Licensure Committee. Birney and wife Emilee are parents to step daughter Kezlee Lamiey, daughter Georgia with another child due in December.

Parrott designs and produces game day programs, writes pre and postgame stories, and designs new infographics for use on the Montana Western website and social media. He works closely with the campus marketing department on other athletic publications and branding projects. Parrott has become one of the most knowledgeable people in the conference statistical program DakStats. Parrott has set up the conference statistical page for post season tournament.

Parrott and his wife Hannah are the parents of daughters Kylie (5) and Lorelai (4). He is a 2010 graduate of the University of Minnesota Duluth