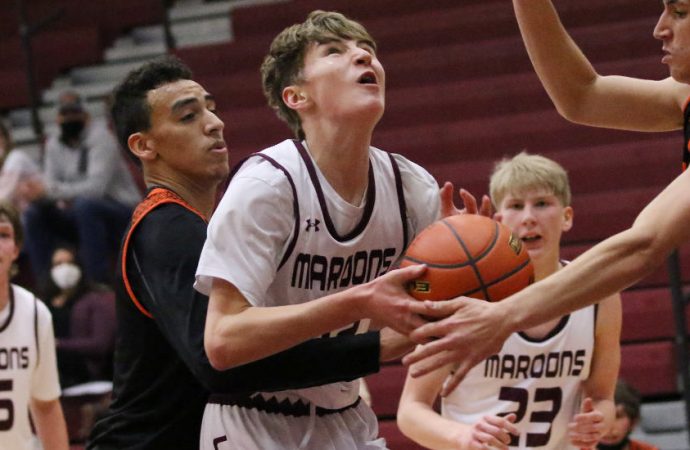 Neither team, Frenchtown nor Butte Central, was very good at its social distancing on defense Friday night.

Points were tremendously hard to come by in a 46-38 Frenchtown boys’ basketball victory over Southwestern A Conference opponent Butte Central in the Maroon Activities Center.

“It was a physical, defensive-minded basketball game played by both teams,” Brodie Kelly, head coach of the Maroons, said. “I think the defenses made both offenses look worse than they are. They challenged every pass, every catch and every shot.”

The in-your-facing was decidedly from less than six feet away.

The rigors, too, were established early when nobody scored until 6-foot-5 junior Bronc Devin Shelton  took a pass from Wyatt Hayes for a layup with 3 minutes, 4 minutes left on the first-quarter clock. The basket ended a nearly five-minute points drought to begin the game as the teams swapped possessions while swarmed by the defenses. BC answered with four straight points as Dougie Peoples drove for a hoop and Kyle Holter stole a pass and pulled up for a successful jumper from within the key. Brandon Finley hit a short jumper for Frenchtown and the opening period ended in a 4-all deadlock.

“Our defense was light years ahead of what it was last week,” Kelly said. “And every game we play this year is going to be like this for us. We’re going to be undersized and inexperienced, but those won’t be excuses. Being 1-3 four games into the season was not one of our goals. We’re learning on the fly.”

Central’s Drew Badovinac gets off a prayer. (Shelly Davis photo)

Bryson Sestrich of BC goes up for a hoop as Brandon Finley of Frenchtown defends. (Shelly Davis photo)

The Broncs bolted out to a 13-6 bulge with a seven-point run before Peoples canned the first 3-pointer of the game. Frenchtown led 15-11 at halftime.

The Broncs broke from the locker room with six straight points on the way to a 10-2 run. Finley tallied four of the points in a balanced run. Frenchtown’s defense helped to maintain the distance and the visitors owned a 31-19 command entering the last quarter.

No starters are back from last year’s Butte Central state championship team and the Maroons started two seniors, a junior and two sophomores Friday night. Only seniors Egan Lester and Bryan Holland logged much varsity time the previous season.

Frenchtown starters included the 6-5 Shelton as well as four seniors, including 6-6 Carson Shepherd and the 6-2 Finley, a third-year starter.

The Maroons challenged them with a surge in the fourth. Shepherd’s three-point play put the margin at 38-26 with 5 minutes left to play. The home team hit for seven consecutive points as Lester netted a free throw, Peoples knocked down his second 3-pointer, Bryson Sestrich sank a foul shot and Peoples drove the key for a layup. The Broncs’ lead shrank to 38-33.

The Broncs kicked back. Shelton tallied on a drive, then caged a charity toss. Lester, though, fired in a trey for Butte Central and the difference was five points, 41-36, with only 35 ticks left on the clock.

Frenchtown worked the free throw line, accepting the fouls the Maroons had to commit to stop time and increase possession opportunities. Finley hooped one at 24 seconds. BC sped downcourt after rebounding the missed second freebie, but missed the layup. Kyle Holter, though, followed and tossed in the rebound for Butte Central’s last points. Frenchtown marched off the last four points of the game by converting foul shots – two each by Shelton and Finley.

“I’m proud of our guys,” Kelly said. “They never quit. We lost a game just like this last Saturday where we got the (deficit) down to two possessions and didn’t pull it out. We had a number of situations we didn’t execute. We’re trying to find each other, trying to become a team. But, I’d rather be doing that with wins.

“We will never lower our expectations.”

Frenchtown improved to 2-0 in conference play and 6-1 for the season as Shelton finished with 15 points, including an impressive two-handed dunk on a fast break, and Finley tallied 14. The Broncs outrebounded Butte Central by a decisive 31-17 margin as Hayes and Jeff Jacobs each pulled down seven boards.

The Maroons were led by Peoples with 16 points. He and Lester nailed a pair of 3-pointers each. Frenchtown missed all five of its tries from behind the arc. Lester wound up with seven points and BC also gained five points from Joseph Sehulster, four from Holter, three from Holland, two from Drew Badovinac and one from Sestrich. Isaac Sholey also played. Butte Central has an 0-3 league ledger and will play at Stevensville on Saturday.

“Every game is a learning opportunity,” Kelly said. “Our defense was good tonight, but now we need to find our offense.”