East Middle School was a packed house Friday night as Butte played host to the Gallatin Raptors to kick off the 22-23 season. It was a great environment, and the energy ran through the entire building as the Butte High boys took the court.

The Bulldogs came out aggressive and kept pace for most of the first half but were outscored in all 4 quarters. Jace Stenson started things off early and often by getting to every spot on the floor he wanted, he poured in 18 points and played great on both ends of the floor. 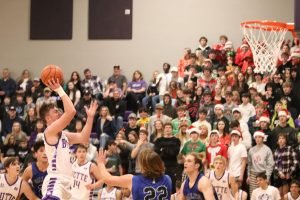 Jace wasn’t alone as freshman Hudson Luedtke put on quite the show in his varsity debut, he had a cool 18 as well and played like he had been out there for 4 years already. Luedtke had an incredible dish under the bucket in the first half, sending his defender on a first-class flight out of town after a pump fake, gifting teammate Kale McDonald the easy deuce off the no look pass. The Bulldogs trailed 33-30 at the half. 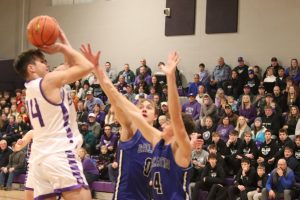 The second half was a different story, Butte fell behind due to missed free throws and lay ups under the basket all night. Gallatin’s senior Eli Hunter went on a scoring tear that would appear to be too much for the Bulldogs to handle in the second half.  Hunter had 25 for the game and Cash Jones was next up with 16 points for the Raptors.

The Bulldogs shot 16/43 from the free throw line leaving a bundle of points at the charity stripe. Coach Luedtke also saw contributions from Camerson Gurnsey who had 8 points, Casey Merrifield tossed in 5, Jonas Shermap had 4, Kale McDonald with 4, and Cayde Stajcar had 2.

Butte played well and will only continue to improve this season they are well coached, and they have the will to win, once this team meshes lookout!

The Bulldogs will look to rebound next Thursday in Belgrade against the Panthers and former Butte High coach Luke Powers. Tip Off is @7pm

2 comments
Was someone you know mentioned in this article? Celebrate with an AllStar listing!