Free Solo: An Outdoor Movie That Will Leave You Shaking Your Head

By David Johnson
for Butte Sports

“It is the most incredible athletic feat of our lifetime,” said Conrad Anker of Alex Honnold’s 3,200-foot rope-free climb of El Capitan (Cap-pea-tan) in Yosemite National Park. Anker, a North Face sponsored adventurer and mountaineer, introduced the film, Free Solo, on Saturday night at the Emerson Center for Arts and Culture as part of the 2018 Bozeman Ice Climbing Festival. “Football championships and tennis tournaments will occur every year; they are predicable,” added Anker. Anker believes Honnold’s solo and rope-less climb stands alone. It’s a first.

Free Solo, the latest documentary from directors Elizabeth Chai Vasarhelyi and Jimmy Chin, tells about the two years leading up to the successful climb on June 3, 2017. In addition to hyped-up physical training, the film shows the intricate study Honnold puts down on paper when preparing for the unthinkable. Honnold did the whole climb 60 times over the course of two years while roped-up with a partner. Honnold would either climb up from the bottom, memorize and then write down the moves, or he would rappel from the top and climb back up doing the same thing — memorizing and writing down every move. Honnold had several yellow legal pads of notes precisely recording the moves he would have to make in order to successfully complete the climb. On the hardest section of the climb, the Boulder Problem, Honnold zeroes-in so laser-like that he describes his moves in terms of moving index fingers, thumbs and big toes. The Boulder Problem alone involved at least fifty different moves that he documented and then committed to memory. 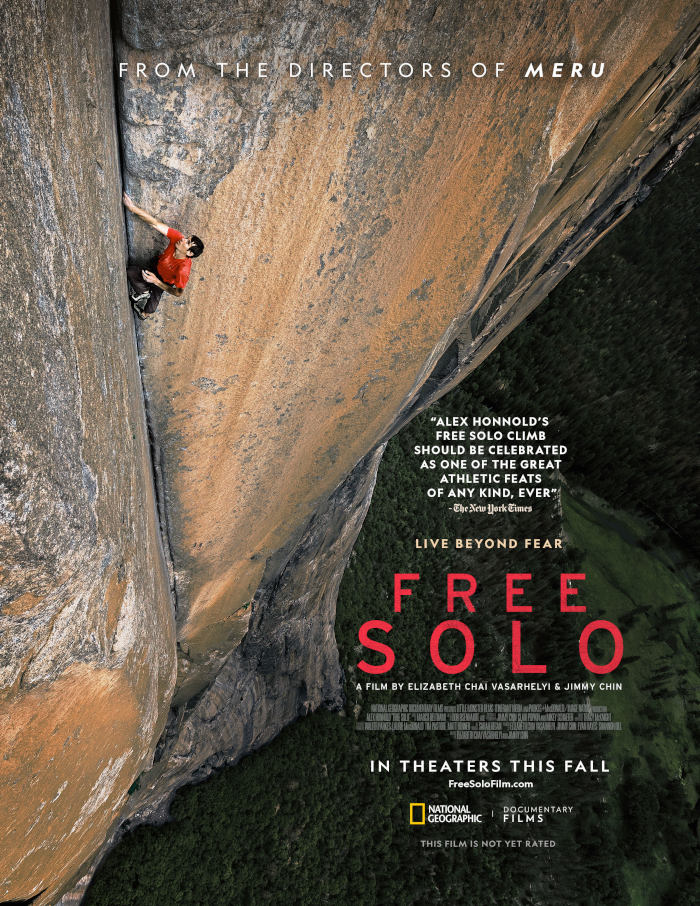 So, yeah, you’ll get sweaty palms and feel vertigo if your see the movie on the big screen. Your pupils will dilate. The audience gasps when his shoes slip slightly on the granite when he’s down climbing 500 feet off the ground; now remember he has no rope; he has no partner. If he falls, he’s dead. Tommy Caldwell, another world-class rock climber, says of what Honnold did on El Cap in 2017: “It’s like winning a gold medal in the Olympics, but if you don’t win, you die.”

But, I think this movie is less about climbing and more about living. Another reviewer, Bret Stephens, also said as much. So you don’t have to be a rock climber to love it. The movie makes you reexamine your own life — your goals, your fears, those things that you treasure.

What has made this documentary so relevant is the tension between Honnold and his girlfriend, Sanni McCandless, the soul-melting van-partner with dimples. She looks fun and carefree. It’s a fascinating relationship. She clearly loves him, but Honnold is unsure how or how much to love her back. “I never hugged until I was twenty-three. My family never used that word [love] when I was growing up,” admits Honnold. Honnold wants to love, but he doesn’t have at his disposal, what Patrick Redford has called, “a robust emotional toolbox.” It’s not his fault. His dad died at nineteen and Honnold retreated into himself and pretty much became a loner.

I’ll give away the ending — he doesn’t die, and he does make it to the top. Well, it’s already an almost two-year old historical fact, so it shouldn’t be that much of a surprise. It’s the journey to the top that is worth watching. It might be one of those movies you see again, and again.

My wife, two kids, and I were in Yosemite once — a long time ago. I rock climb, but I don’t free solo. We were coming up on a view of El Cap. The main road into Yosemite Village goes right by it. It was June and about 95 degrees out. The kids were asleep. Linda was driving. I asked her to pull over.  There was a turn-out for El Cap. We stopped. I got out. I ran over to the base and craned my head all the way back. The fact is when you look up the cliff face from the bottom you can’t see the top. When Warren Harding climbed it for the first time in 1968 with a rope, it took two friends and him eleven days. Honnold took 3 hours and 56 minutes.

Even back then, I walked slowly back to the car shaking my head.

— David Johnson, a retired Butte High English teamer, says you might have to go the Roxy in Missoula to see the movie on the big screen or wait until January when it will come out on DVD, Blu-ray, HD from Amazon, and iTunes. He can be reached at johnsonfam77@hotmail.com.