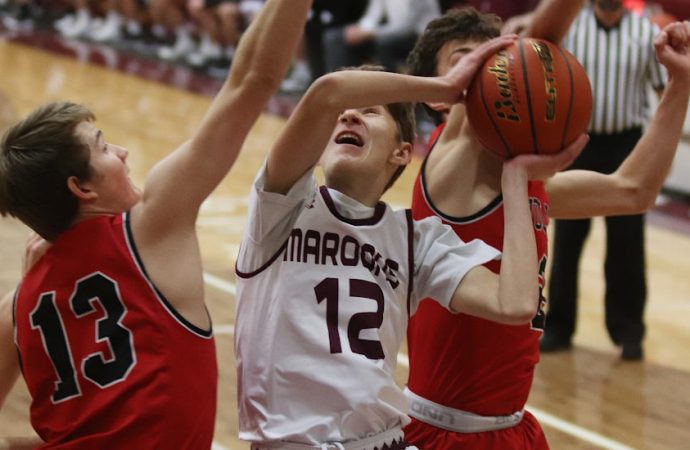 Butte Central did not have any secrets Thursday night.

The Maroons did not make any changes of scheme or pull out any tricks as they used a strong fourth quarter to pull out a 49-40 non-conference win over Three Forks at the Maroon Activities Center.

BC just started to play better.

“We just made better player,” Central coach Brodie Kelly said. “We didn’t really adjust much that whole game. I think in the fourth quarter we just concentrated and stuck to our fundamentals a little better.”

That better play held the Wolves to just six points in the final eight minutes. That came after Three Forks erased an 11-point deficit to send the game into the fourth quarter tied at 34.

It was a plot that Three Forks coach Terry Hauser has seen play out way too many times already this season. The loss dropped the Wolves, who have just two players returning from last year’s Class B State tournament team, to 0-5 against some tough competition.

“We played a great game,” said Hauser, a former Butte High coach who led the Bulldogs to the Class AA State tournament in 2013. “Just at the end of the game, once again, we didn’t execute. That’s been the story of your season so far. We’ve been in every game.”

Kyle Holter of BC knocks down a jumper over Three Forks’ Devon Potts. (Bill Foley)

Egan Lester of BC looks to pass inside a Three Forks defenders Collin Stone (24) and Walker Page close in. (Bill Foley)

Butte Central evened its record at 1-1 with its first win since the Maroons knocked off Browning in the semifinals of the Class A State tournament last March 13 in Billings.

Like with Three Forks, the Maroons were hit hard by graduation. They lost nine players from the team that shared the state title with Hardin.

For the second time in as many games, sophomore Dougie Peoples led the Maroons in scoring. He tossed in 18 points, knocking down three 3-pointers.

That included the shot of the game, a baseline 3-pointer off a pass from Bryan “Hugo” Holland to give Central a 43-37 lead with 2 minutes, 17 seconds left. The swish started a 9-0 run that put the victory to bed for the Maroons.

“It was a good find by Hugo,” Kelly said.

That shot, which came shortly after Peoples drove for a bucket, broke open a cold-shooting fourth quarter for both teams.

The Maroons took the lead for good by hitting 4 of 6 free throws to start the quarter. Peoples’ drive answered a bucket by junior Owen Long. Long’s hoop, which came at the 3:15 mark, was the first fourth quarter field goal from either team.

For the second straight game, Peoples got the Maroons scoring started with a baseline 3-pointer. A put back by classmate Kyle Holter made it 5-0 BC, and the Maroons never trailed.

Central led 13-5 after the first quarter, and the Maroons led by as many as 11 points twice before heading to halftime leading 28-21.

Three Forks got back into the game largely thanks to a pair of 3-poitners from Long, who scored 16 points to pace the Wolves. Both came as Three Forks closed the quarter with an 8-0 run.

Austin Allen was fouled as he drove baseline with 25 ticks left on the third quarter clock. He sank both free throws to knot the game at 34.

Central’s defense took over from there, and the Maroons did it without the use of perhaps their best defender much of the way. Holter picked up his fourth foul in the early moments of the fourth quarter.

“That was a tough blow for him,” Kelly said. “He’s one of our best players, and he was in foul trouble pretty much the whole game.”

The win came despite a tough shooing night for the Maroons. Central hit on just 6 of 23 attempts form the 3-point range.

“We’ve got great capability from the 3-point line,” Kelly said. My expatiations of 3-point shooting are a lot better than that. We’ve got to be better than 25 percent.”

The BC coach said the Wolves had something to do with Central’s offensive woes.

“Three Forks did a good job. They were really active in that zone,” Kelly said. “We’re not really good in scout zone in practice, so it was the first time we faced that type of zone.”

Holland, who was a force on the boards for the Maroons, scored 10 points in the win. Holter Joined Joseph Sehulster with six points, while Bryson Sestrich, Drew Badovinac and Egan Lester each scored three. Isaac Sholey also contributed for the Maroons.

The Wolves will play host to Manhattan Christian Friday before continuing their brutal early-season schedule against Dillon.

Hauser said he is confident his team will start putting wins together.

“I love my team. They play their butts off,” the coach said. “It was a fun night. We had our chances, and it was kind of fun to be back in Butte.”

The Maroons jump back into Southwestern A play Saturday when they head to Corvallis.