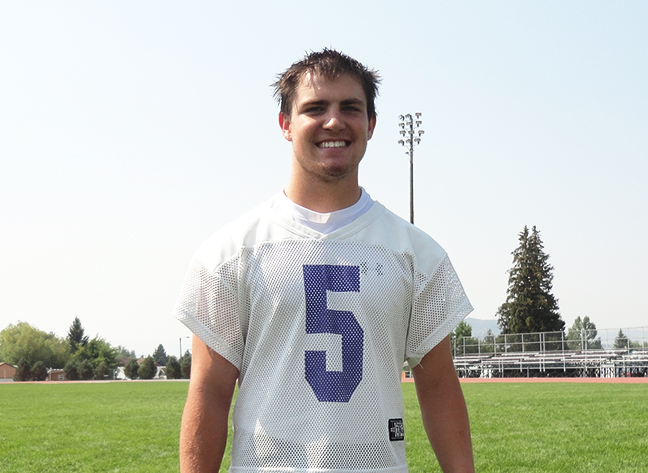 Zach Bunney is going to fit two seasons worth of football into one.

The Butte High senior will be making up for lost time in 2012 as he tries to help the Bulldogs make a return trip to the Class AA playoffs.

Bunney will play running back and safety for the Bulldogs. He’ll also return kicks.

“I’m even trying to long snap,” Bunney says. “I did that freshman year. I’d just do anything to be on the field. I’m just trying to make up for last year.”

Last year while his teammates were facing the likes of Billings West, Helena Capital and Great Falls Russell, Bunney was in a Spokane, Wash., hospital trying to take his mind off what he was missing.

Game time was the toughest part for Bunney. He couldn’t just lie in bed while the boys in purple and white were giving it their all on the gridiron.

So Bunney would get up and ride an exercise bike or lift some dumbbells.

“Every Friday night I’d know my friends would be playing, so I would try to work out in the hospital,” Bunney says. “It just made me sad knowing I couldn’t be out there, so I just had to do something to get my mind off it.”

While family and friends wondered if the 5-foot-6, 160-pound Butte boy would be here at all for the 2012 season, Bunny used football as his driving motivation to fight off the disease.

Doctors feared he’d never play sports again because they feared he had permanent heart damage after suffering heart and kidney failure during treatments.

Some hearts, though, are just too strong.

“I knew I’d be here,” Bunny says, standing on the field at Bulldog Memorial Stadium after a recent practice. “I was thinking about it every day. I always wanted to be back here with my friends and teammates.”

Bunney started noticing something was wrong with him toward the end of his sophomore track season.

“I was just really tired and just the littlest things would make me gassed,” he says. “I just couldn’t catch my breath. I was sleeping all the time; I just couldn’t stay awake.”

He also started feeling a pain in his sternum.

A trainer with Butte High sent him to a doctor, and blood results didn’t look good.

They sent me over to Dr. (Kenneth) Graham, and Dr. Graham said ‘It could be cancer, so we’re going to send you Spokane.’

“Within 24 hours I was told I had cancer and going into surgery the next day.”

Bunney need a catheter put in his chest to administer chemotherapy.

Back home, Bunney’s friends rallied for the stricken Butte boy.

Nearly every high school boy and girl in town — plus a whole lot of adults — were wearing blue “ZB” wristbands.

Fundraisers were off and running almost overnight.

“I started getting a whole bunch of calls and emails,” Bunney says. “Things were going on that I didn’t even know about. It was all a big surprise.  I didn’t think I could cause something like that, but I did.”

AML is a type of cancer that usually strikes older people.

Bunney says that was a silver lining because the recovery time isn’t as long for AML as it is for the type of leukemia that typically strikes younger people.

“That’s like a three-year process, and mine was only a year,” he says. “So I lucked out with that part.”

“The teachers were really good,” he says. “They faxed all my work to the hospital and I got it done when I could.”

After having surgery to remove the catheter, it took Bunney just two days to get back to the classroom.

“I just needed to get back to normal,” he says.

Bunney also got back on the football field, although he wasn’t even close to full strength, and coach Arie Grey was determined to get him on the field.

“I wasn’t in shape at all,” Bunney says. “I went to practice all that week. I couldn’t really do anything because I was still shaky after getting off my medicine. I could barely jog because my legs were so weak.”

Still, Butte High coach Arie Grey was determined to get the inspirational Bunney in the game.

As the Bulldogs inched closer to the goal line late in a 42-28 Senior Night win over Missoula Sentinel, there wasn’t a dry eye at Naranche Stadium when Bunney took the field.

He ran the ball for one yard to the 1-yard line.

The next play he scored a touchdown and the place went nuts.

For so many, the made-for-TV moment was the comeback story of the year. Sadly, it was also a glimpse of what the Bulldogs missed in 2011.

Bunney suited up for every varsity game as a sophomore.

The Bulldogs had big plans for the little running back who was really coming into his own as an athlete.

“The last track meet before I went to Spokane, I was a hundredth (of a second) off qualifying for State in the 100,” Bunney says.

He was running the 100-meter dash in 11.3 seconds. He was also super quick and agile.

“We had a bunch of formations for me, Kyle Shaw and Clay Brozovich,” Bunney said. “We were looking pretty good in open gyms.”

“It’s amazing to see where he’s at right now,” Grey says. “It’s his heart, his belief, his drive to be on the field, his work ethic and all those things.

“We’re definitely very excited to have this very talented kid who works so hard.”

Bunney returned to the track as a junior. He wasn’t as fast as before, but he got faster and faster with each meet.

“During track season I wasn’t as fast as I was during my sophomore year, but I’m feeling pretty good right now,” Bunney says. “All my strength is not back, but I’m getting close. I’m working hard to get back to normal.”

Now, he looks like the football player the Bulldogs were hoping to have last year, and then some.

Butte High athletic director Chuck Merrifield said the entire state was raving about the play of Bunney at corner back during a June Class AA camp.

Bunney started playing the position as a way to stay on the field.

While Bunney says he isn’t 100 percent yet, Grey says he has a big-time playmaker at his disposal.

“He plays so physical for a kid who is 5-(foot)-6, 5-7,” Grey says. “If he has a little crease, he has the chance to take it. He has the unbelievable explosiveness that you can’t coach.”

You also can’t coach the new lease on life Bunney says he gained from fighting leukemia. He also has a new lease on football.

“Throughout my whole football career, I wouldn’t work as hard or I wouldn’t do all the reps,” he says. “Now I just don’t know when it’s my last so I give it my all, all the time.”

Health-wise, Bunney says everything is fine. He’s back up to 160 pounds after dropping to as low as 130 during chemo treatments.

“I keep going for checkups and I got a clean bill of health,” he says.

“He’s definitely got a chance to play at the next level,” Grey says, “and he’ll work extremely hard for whoever he plays for.”

First, though, Bunney wants to play two or three seasons for the Bulldogs in 2012.

“I just wanted to get as much playing time as I could this year,” Bunney says. “I want to make the most of it.” 3 comments