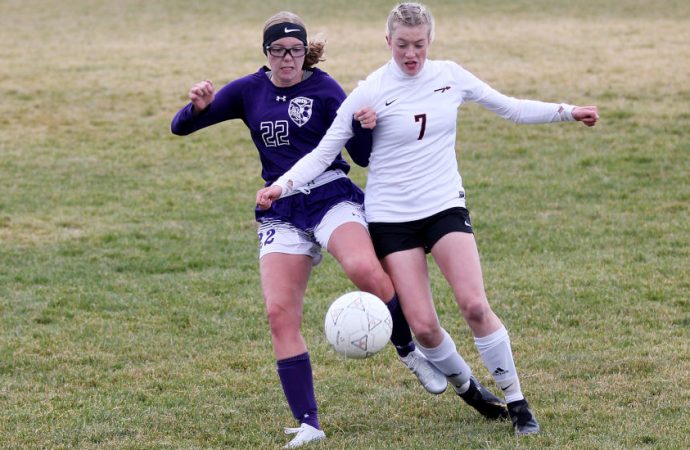 A shiverfest of a girls’ soccer game Friday saw two Flathead players warm up to the conditions nevertheless.

Junior forward Skyleigh Thompson was particularly combustive for the Bravettes as she and Ashlynn Whiteman both kicked up hat tricks in an 8-0 Western AA Conference victory over Butte High at the Jeremy Bullock Memorial Soccer Fields Friday.

Temperatures were mostly in the 30s and some rain and wind tailed in to snowy weather that chilled the preceding boys’ game.

Thompson scored three goals in the first half. Kami Darrow tallied first for the Bravettes on a slick-ball hard shot that slipped through the goalkeeper’s grip and then Thompson strung her three goals — the first two finishing out the half.

All were from out front in the goal mouth and all came on nifty dekes and moves.

“We started the game getting into a pretty deep deficit,” Butte High head coach Jacob Steilman said. “We couldn’t cope with Skyleight Thompson. She broke up the game and we lost control of the game.”

Witeman then took over the goal-execution for the Bravettes, two on deflections and the middle shot being a header. Flathead’s last goal was scored by Ellie Hawes seven minutes before the end.

Most of the contest was played on Butte High’s end of the field, forcing ‘keeper Haley Herron into continuous save mode. She notched at least five deflections over the bar to go with several lunges, dives, slides, leaps and running catches of determined tries by Bravette kickers.

“Haley had a great game in goal,” Steilman said. “She had no right to expect to make some of the saves she did.”

The Bulldogs played several reserves toward the end of the match, which Steilman said was good. It should be beneficial to the team’s future.

“I don’t think there were any negatives about how we played, today,” the coach said. “We couldn’t cope with their talent.”

The Bulldogs will be home again on Saturday, playing Kalispell Glacier at 11 a.m. at the Bullock complex.