By Sean Eamon
for ButteSports

Luis “Yuri Boy” Campas poses with Anthony Bonsante at the Butte Civic Center Friday night. The two will be headlining the Battle of the Ages professional boxing event on Saturday.

Organizers and fans of the Battle of the Ages can breathe a sigh of relief.

Every fighter that showed for Friday night’s weigh-in ended up making weight.

Fighters, media and organizers of the event converged at the Butte Civic Center Friday night for the weigh-ins, in preparation of Saturday’s fights. The fights start at 8.

Anthony Bonsante brought a nice-sized posse to the weigh-ins. He ended up tilting the scale at 166 pounds.

Both fighters will enter the ring at 44 years young for Saturday’s main event. The two are talking of retiring after this bout, so they will want to close this chapter of their lives on a good note in front of a Butte crowd.

Before the main event fighters weighed in, the others took their turn on the scale. A bagpipe hummed in the background, just another reminder this was taking place in the Mining City. 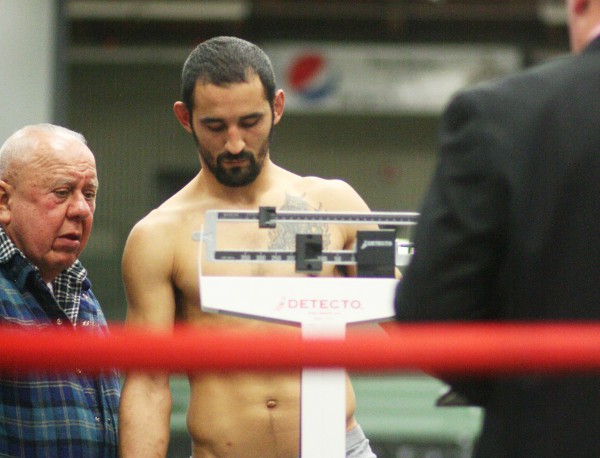 Butte’s own Anthony Curtiss was one of the first to enter the ring for weight. He came in at 146 pounds. His opponent, Aaron Von Snow of Idaho, came in at 142 pounds.

The fight will be Curtiss’ debut as a professional. Curtiss went 3-0 as a semipro.

Among the other weigh-ins involving locals, Jered Lunceford of Anaconda came in at 173 pounds. Justin Walker came in at 168.8 pounds fighting out of Billings.

Walker was previously misidentified as “Mickey” Walker in pre-fight coverage. Lunceford will be taking a 1-0 pro record into the ring against him. 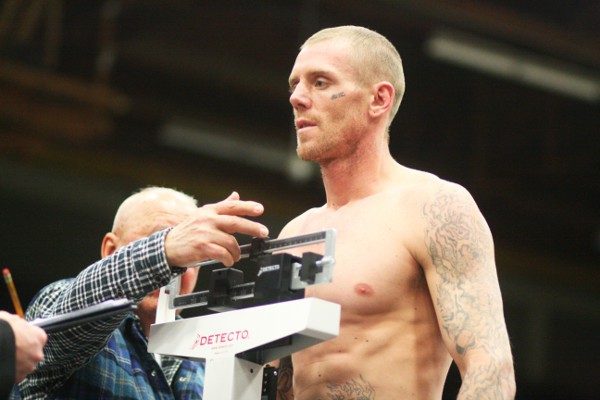 The other local fighter taking the ring is Anaconda’s Eric Hempstead. He fights at heavyweight, so there was no worry there, as long as both he and Josh MacPherson of Wyoming were heavy enough.

Hempstead came in at 245 and MacPherson at 280.8. The Anaconda fighter will be looking to improve on his 2-0 pro record. His fight will hold a lot of interest as he is believed to be one of the hottest heavyweight prospects from the Treasure State since Joe Hipp.

Saturday’s opening bout will see Kevin Kline of Bozeman face Tyler Vogel of North Dakota. Kline came in at 191 and Vogel at 188.8.

Spokane’s Jacob Szilasi posted a weight of 146 pounds for his fight against Jake Fowler of Livingston. Fowler’s weight was 150.5.

In the lead-up to the main event, Jesse Uhde of Kalispell put up a weight of 172 pounds. His opponent, Andrew Howk of Kalispell, will weigh in Saturday. Howk is just coming off of an MMA championship fight in December, so the odds are that he is in shape and will be in Butte Saturday.

For a more in depth preview of Saturday’s fights, check out Sean Eamon’s preview that was published Thursday.

Battle of the Ages
Saturday
At the Butte Civic Center