Family rules the night at Butte Sports Hall of Fame 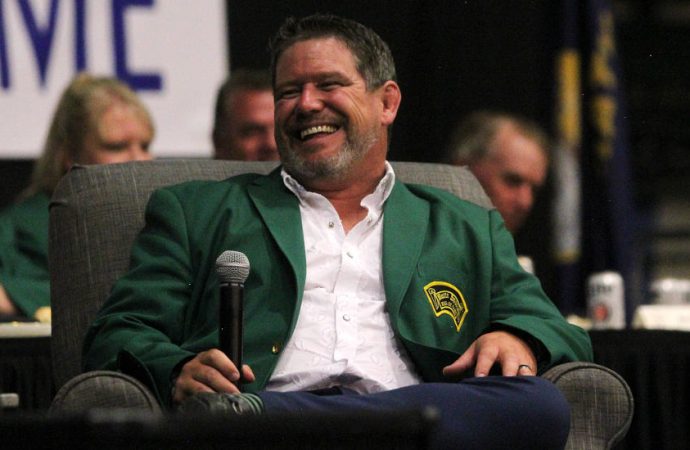 The nine newest members of the Butte Sports Hall of Fame kept turning to the same theme Saturday night as they met the public during the induction banquet.

They all talked about family.

Street is the fourth member of his family to go into the Hall of Fame. His sister Jackie went in with the 1984 Butte High track team. His father Jim went in as an individual in 1999. His brother Randy was inducted posthumously in 2017.

Jim and Randy Street have also been enshrined multiple times as part of state championship wrestling teams, Jim as a coach and Randy as a wrestler.

So, Ron Davis, who introduced and interviewed each inductee, asked the obvious question. Who is the toughest Street.

“You’re talking to him,” Street said with a laugh.

Bob Rowling looks to the crowd as he answers a question during the Butte Sports Hall of Fame induction ceremony June 15. 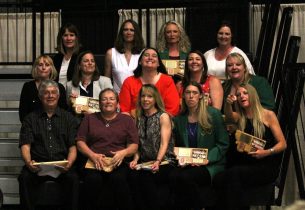 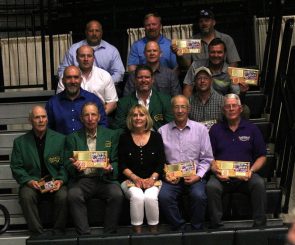 The 1979 Montana Tech football team walks down the carpet during introductions. 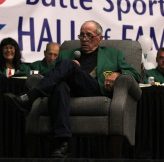 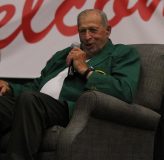 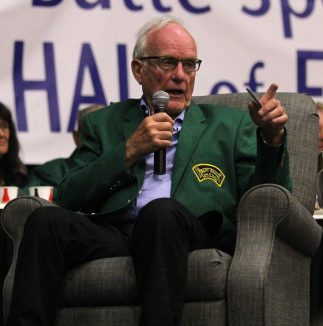 Another obvious question: What was it like competing for your father?

“It kept me out of trouble,” Street said.

Street was an accomplished football player and a member of the 1991 Butte High state championship football team, which joined the Hall in 2017.

“The best Butte High football team ever,” Street said. “Barry is on the second.”

Sullivan was a captain and quarterback of the 1977 state championship Butte High team.

After the jokes, Street praised his teammates, coaches, his father, whom he referred to as “Coach Street,” and his family for his success.

“All those guys just beat the tar out of me and made me better,” Street said of competing against his older teammates early in his career. “Luckily, I came from a household where there was no excuses. It molded me to be better.”

Street went on to be a three-time state champion and accomplished college wrestler.

Sullivan, who laughed at his team being labeled No. 2 in Butte High history, talked about playing against his older brother Pat.

Pat played receiver for the University of Montana and was a senior when Barry played quarterback for Montana State as a redshirt freshman.

“Pat caught a touchdown pass in that game,” Sullivan said. “I scored two touchdowns, and we won.”

Barry Sullivan also motioned to his 91-year-old father, who was sitting at a table in the front row, when asked about playing on the 1972 state championship Little League team.

“My father was the manager of the team,” Sullivan said, “Mark Sullivan.”

Lonner, who was a roommate with Pomroy at the University of Montana in the 1950s, pointed out that he was nominated by his brother Terry and legendary coach Sonny Holland, who made the trip from Bozeman to take in the event.

Lonner, known for his sprinting for the Bulldogs before moving on to the Grizzlies and then the national scene, said he didn’t always “see eye to eye” with coach Swede Dahlberg. He credited Dahlberg for making his post-high school career possible, though.

The quite and humble Lonner recalled a conversation he overheard Dahlberg have with a Grizzly coach.

Dahlberg said: “If you don’t take Lonner on a full athletic scholarship in the fall, I will never again send you an athlete,” Lonner said, quoting the legendary Butte coach “That was something. That turned everything around.”

Pomroy joins his son, Tom Pomroy Jr., in the Hall of Fame. The younger Pomroy went is from the Class of 2007.

Pomroy Sr. was known as an all-around athlete, staring in handball, baseball and football.

The elder Pomroy also thanked his father for his success.

“My dad taught me how to pitch at a young age,” he said, naming off his arsenal of pitches.

He called being inducted into the Hall one of the best honors of his life.

“I had the same honor when my children were born — Terri, Tommy and Steve,” he said

Means, a 1969 Little Sullivan Award winner for her prowess as a swimmer, diver and gymnast, said all of her success was about her family.

“I think I came right out of my mother’s womb into the swimming pool,” she said. “She loved swimming, and she was my coach.”

Means and her sister Pam were the best two swimmers and divers in the state. Their brother Ron was also a top competitor.

“Anyone in the Bender family could be up here,” Means said.

Means said going to meets was something that just came natural for her family.

“It wasn’t a competition; it was more of a journey,” Means said. “Where are we going today?”

Aside from being a great player for the Bulldogs and Grizzlies, Hauck is known as a long-time successful coach.

“I didn’t really want to go to Wyoming,” Hauck said. “I thought I’d stay around and see who gets the job. Low and behold, Bobby Hauck got the job.”

Bobby Hauck is Tom Hauck’s nephew, so Tom stuck around with the team.

“His mother made hi hire me,” Tom Hauck said.

“To be able to follow in my family footsteps is wonderful,” Carlson said.

Her father, Ted Ackerman, was the coach of the Butte High girls’ basketball team when she was a young girl.

“That’s where I met my idol, Anna Wherry,” Carlson said of Wherry, a Butte Sport Hall of Fame committee member who just happened to be on stage handing out plaques. “I just wanted to be Anna.”

Rowling said the event led to the largest family reunion he has ever had.

He entered the Hall in the contributor category following long career as an official and the county parks and recreation director.

“I refereed for every one who is in here who is under 70 years old,” Rowling said with a laugh.

Rowling shared some stories of the road and praised the Mining City and the Hall of Fame.

This marks the third different Hall of Fame for the man known as “Rollo.”

“There is no comparison,” Rowling said. “This is the best. This is beyond a doubt something only Butte can do.”

Riley excelled in many sports on his way to the Hall of Fame. He, too, said he was the product of a strong supporting cast.

“No one gets here by themselves,” Riley said. “It’s all about your family and friends and teammates.”

Riley joked about being a “sissy” for playing racquetball in Butte, which he called a “handball town.”

When it comes down to it, though, Riley said he identifies so much with his hometown.

“I consider myself a Butte guy, and I don’t think there’s anything better than being a Butte guy,” he said.

Riley also took note of the holiday on Sunday.

“Happy Father’s Day, dad,” he said to his father, Red, who was sitting at a table up front.

The coaches for the teams also found familiar themes as they praised the men and women they used to lead.

Bill Connor was the head coach of the 1979 Tech football team. He said the support his team had from Butte was off the charts.

Connor explained that in order to build a successful football team, he needed to create a scholarship program.

“We raised the money in Butte, Montana, to cover the scholarship program and pay off the debt in one day,” Connor said “That is really something.”

“We will never forget the amazing support we got from the Butte community,” Buysse said. “Many of us don’t live here. We visit often because we love the community so much.”

Buysse also praised her players, who did not have an easy task as being female athletes in the early 1980s while going to school at what was then a male-dominated engineering school.

“I’m very proud of them as students and athletes,” Buysse said.

John Ries, the coach of the Butte High volleyball team, had a similar message about his team. He said his players turned out to be everything from teachers and coaches to a fighter pilot.

“They all excelled in life and sports,” Ries said.

The coach also pointed out that Butte High’s only state championship volleyball team won the title in Butte.

“This was a team that was destined to win the state title,” he said. “They rose to the occasion and won the state championship in their own gym.”

Jim Street told of the story of Keith Haberman, who won the state title at 152 pounds, to highlight his 11th straight state crown.

Haberman suffered a broken jaw a couple of weeks before the state meet. Then he met a wrestle whom he lost to three times in the season in the title bout.

Early in the match, Haberman’s jaw was hurt by an illegal move. If he would have not been able to continue, he would have won by disqualification.

Instead of taking the easy way out, Haberman chose to wrestle, and his victory helped give the Bulldogs another title.

“I had a whole room full of kids who would have done the same thing,” Street said proudly.

The next Butte Sports Hall of Fame induction will be held in 2021. The Hall has welcomed a class every two years since its inception in 1987. 2 comments