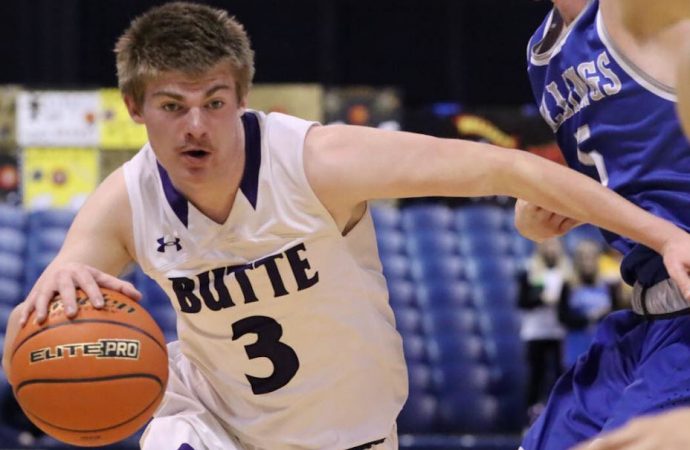 BOZEMAN — Butte High might have been pressing a little bit with active nerves when unable to drop in some important shots. However, the Bulldogs did OK from the free throw line — once they got there.


“Our kids have never played at a state tournament before,” Matt Luedtke, head coach of the Bulldogs, said afterward. “The Skyview kids kept their composure a little better than we did.”

Butte High is in the state tournament for the first time since 2013. (Bracket)

The loss put Butte High at 8-15 for the season and into a noon, Friday loser-out game against Helena Capital, which fell 74-72 to Great Falls High in an overtime thriller. Skyview and Great Falls will meet in Friday’s 6:30 semifinal. 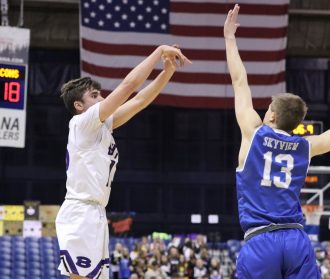 Butte’s Jake Olson goes up for a hoop past Skyview’s Camron Ketchum. (Photo by Carrie Casagranda Leary, for Butte Sports)

The Bulldogs held leads of 15-10 after one quarter and 22-18 at halftime. The Falcons went ahead 30-29 on a pullup jumper by Butte-rooted Payton Carle with 29 seconds left in the third quarter and never again trailed.

Carle’s dad, Mike, was a Butte High standout and his mother, Vickie (Heebner) was a great at Three Forks before both starred in athletics for Montana State.

“The third quarter got away from us a little bit,” Luedtke said. “We were scrapping and scratching and it was tough. I don’t think we had a call or a bounce go our way.”

Butte High never reached the free throw line until the 4:20 mark of the fourth quarter when Jake Olson netted a foul shot to complete a three-point play. It cut the Skyview lead to 38-35.

The Falcons responded with a flying dunk from 6-foot-7 Julius Mims off a Camron Ketchum pass. Andrew Booth netted two charity tosses for the Bulldogs and Tommy Mellott caged one of two later as the team wound up 5-for-6 from the line.

“They got it going in the second half, offensively, and in the fourth quarter, we had to foul and make them shoot free throws,” Luedtke said., “They didn’t miss too many.”

Skyview hit on eight of 10 freebies in the last minute and a half to salt the victory away. The Falcons made 17 of 24 free throws for the game. Butte High was charged with 21 fouls and Skyview with 11. The Bulldogs needing to foul in the final moments caused much of the difference.

“We kind of controlled the first half,” Luedtke said. “We got a couple of stops to open it up and hit a couple of buckets. The start for us, it was huge.”

Carle canned a 3-pointer for the first points of the game, but Butte High gained a 6-5 edge as Cael Stenson and Blake Drakos stretched strings from 3-point distance against an in-the-key pullup by Ketcham. Drakos drilled another three-range jumper and then sliced through the paint for a layup and an 11-6 Bulldog edge. Skyview got back on a 3-pointer by Ky Kouba and a foul shot by Peyton Sanders. Butte High closed the quarter on a drive to the hoop by Mellott and a fast-break basket by Kenley Leary off a Mellott steal and pass.

Skyview, though, didn’t stay behind.

“They have good players,” Luedtke complimented.

Carle and Sanders  led Skyview with nine points each.