Who is the best of all time?

Who is the greatest Montana handball player? There are several great players in the history of Montana Handball.  Recently, I have been going through old newspapers searching for handball results and stories. While doing this, the question keeps coming back to me, so I am going to try and answer it.

The Montana State Handball Championship tournament started in 1919 and has played almost every year ever since. The only years it wasn’t played was 1943 through 1945, due to World War II. There was a lot of handball activity those years, but mostly local. This year is the only other time we missed a State tournament, with the COVID-19 pandemic dooming the State Singles tournament.

The early years of Montana Handball were dominated by Lester Loble and Kirby Hoon, both of Helena. Lester won the first singles title, with Hoon taking the next three. In the end, Loble finished with six titles and Hoon four. Butte’s Ray Gallant ruled the 30s and early 40s, winning eight titles and would have been a favorite in the missed war years, as he won in both 1942 and 1946.

Gallant’s last title in 1946 came in a close match with Great Fall’s Jim Ritter. At the time, people probably didn’t realize how rare it would be to see Jim Ritter lose a handball match in the Montana state tournament. Between 1947 and 1969, Ritter won 19 Montana State Singles titles. It would seem that Ritter had laid claim to be the greatest Montana handball player of his era and probably ever, or did he?

Butte’s Bob Brady was about the same age as Ritter and won the Butte City title in 1942 and 1943. He lost the 1942 Montana Final to Gallant in a tiebreaker, in what would turn out to be his last chance to win the Montana title. Brady joined the Navy in 1943, shortly after winning the Butte title with a win over Gallant in the final. He then ended up in San Francisco and played handball at the famed Olympic Club. Soon, Brady was one of the best players in the nation. He won the AAU National Title in 1951 and 1957 and the USHA National Title in 1953. His 1957 AAU Title featured a final round win over Jim Jacobs, one of a handful of players in the argument for greatest handball player of all-time.

Interestingly, Ritter went to the 1960 National Tournament and played Jacobs in an early round. He lost the match but took a game 21-20 off Jacobs. So, in the summer of 1960, an exhibition match between Ritter and Brady was arranged at the Elks in Butte. The Montana Standard had a nice write up previewing the match. The match ended up being anticlimactic, with Brady winning three lopsided games. Though it was noted that Ritter wasn’t up to his usual form. It was July, which isn’t exactly handball season. 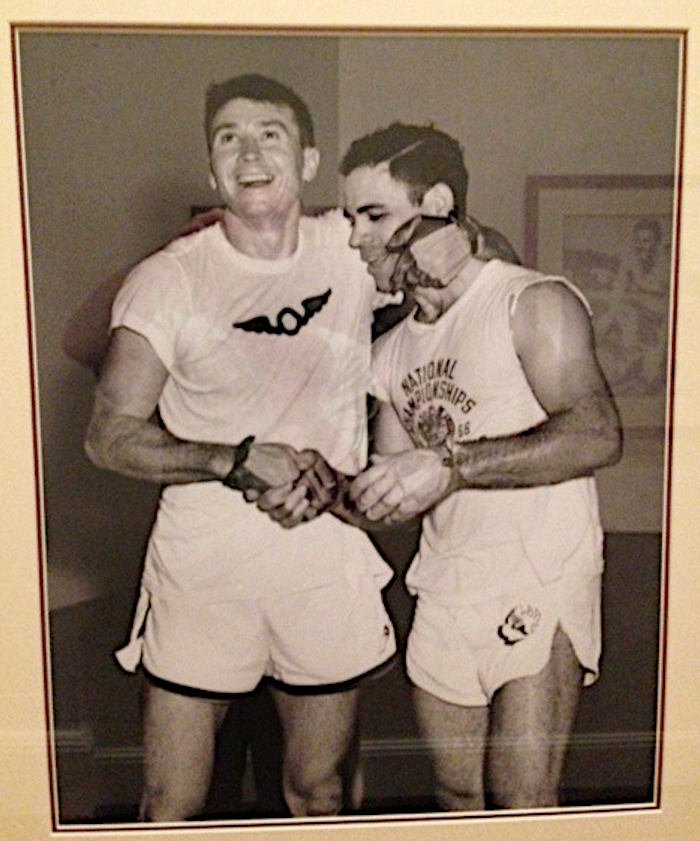 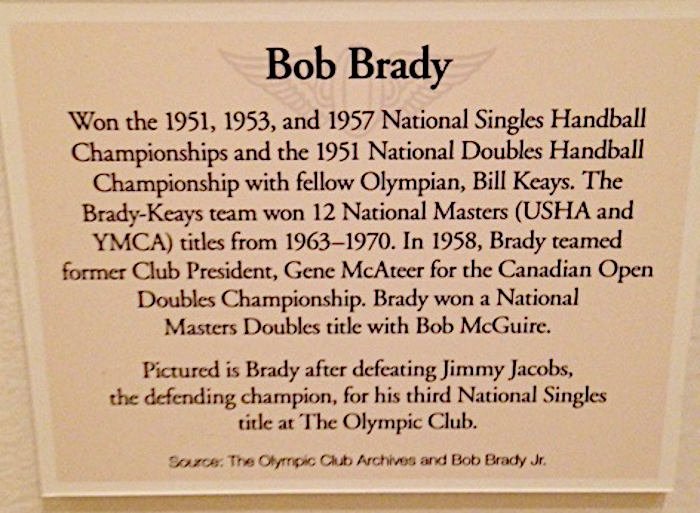 A photo of a plaque at the Olympic Club in San Francisco.

So now who was the greatest? Brady has far greater accomplishments on the national level, but it is hard to argue with 19 State Titles.

Just after Ritter’s title run ended, another great player emerged. Butte’s Bill Peoples won the eight straight titles starting in 1971. Additionally, Peoples won the 1973 and 1975 Collegiate National Titles, leading Montana to the team title in 1973. Peoples eventually won 15 Montana State Singles Titles, as well as 6 doubles titles, compared to Ritter’s one doubles title. Though winning both became easier in 1981, when the single and doubles was split into separate tournaments. Peoples would have likely won more, as he moved and won four Washington State Titles and played as a pro for a few years and wasn’t eligible due to resident and amateur requirements.  People also added a National Masters title and some National Masters doubles titles to his resume. He also played in the National Open Doubles final with Dave Chapman while in his late 40s, they finished second, but still a notable accomplishment.

While Peoples was dominating the Montana scene, another great came along. Butte’s Steve Stanisich battled Peoples for some of his titles and eventually beat him for some of them. He also dominated a stretch in Peoples’ absence and eventually won eight titles, matching the great Ray Gallant. Stanisich also finished second in the National Collegiate tournament four times, an amazing and perhaps heart-breaking accomplishment. Stanisich also teamed to win a National Masters Doubles title in 1996.

In the latter years of Peoples’ and Stanisich’s careers, another Montana Handball great emerged. Justin Balkenbush grew up in Conrad playing handball. He then played football at Montana Tech and thus handball at the Elks in Butte. There he honed his skills against the likes of past Montana Champions Butch Starin and Tom Pomroy. By 1994, Balkenbush could play with any of them. In the 1994 tournament in Butte, he beat Peoples in the semifinals and then won by injury default over 1990 Champion Pomroy in the final. He proved it was no fluke, by winning two of the next three titles, losing to Stanisich in the 1996 final. Work interrupted his string, as he moved to Alaska, but he moved to Billings in 2005 and won four consecutive titles and added another in 2011 to give him eight to tie him with Gallant and Stanisich. Justin’s brother Jay is also a top-level handball player who moved out of state. The brothers teamed to win three Montana State Doubles titles and Justin won three more with other partners. Balkenbush also won a National Open Championship in 1996. While very impressive, it does differ from Brady’s titles, in that there was a separate pro division, so he didn’t have to face the best players in the country. 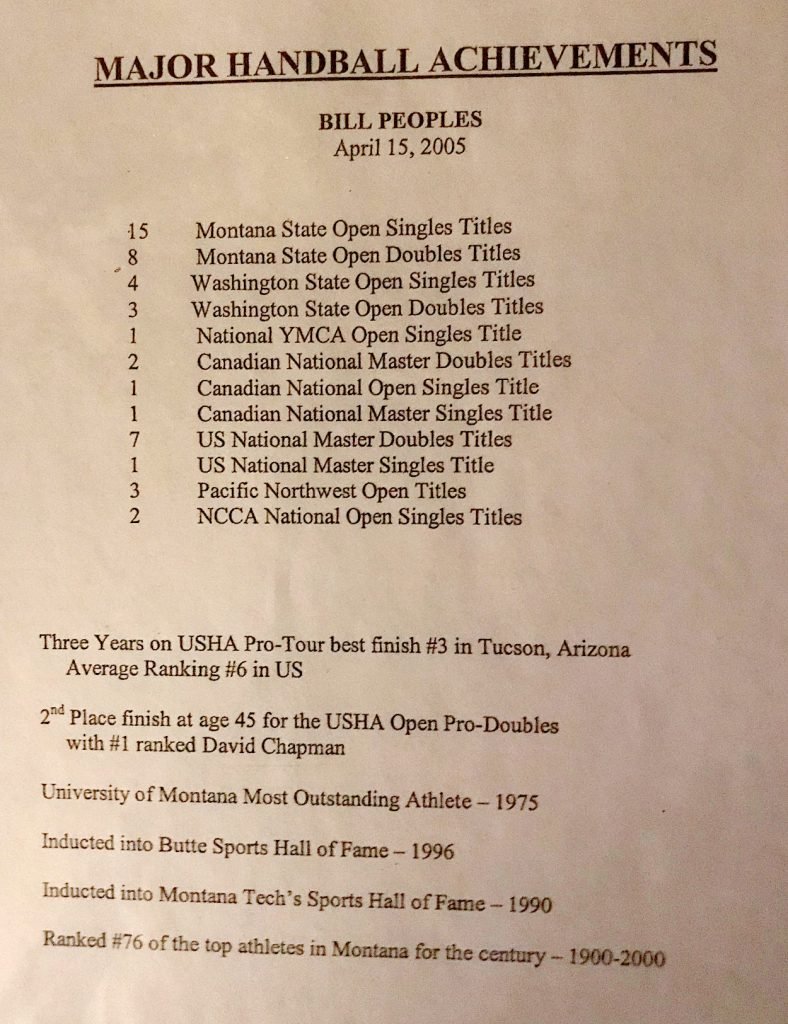 In the 100 plus years of Montana Handball, only 22 have managed to win the State Open Singles title, along with those featured above they are: Chance Wachholz, 4; Ryan Spotorno, 4; Nick Kalafat, 3; Norm Gray, 3; Andy Tucknott, 2; Butch Starin, 2; Jeremy Morton, 2; Oscar Thoren, 2; Brett Badovinac, 2; Fred Emmett; George Melton; Gil Holshue; Harry Wallace; Tom Pomroy; and Scottie Moller. There were undoubtedly other great players, who could have won titles if it weren’t for the likes of Gallant, Ritter, Peoples, Stanisich, and Balkenbush. I’d try to list some but would undoubtedly leave many deserving players off the list, so I won’t. Lists of Montana Handball champions and championship counts can be found here.

Montana also has a great history of age group players, but that is a topic for another day.

So, who is the greatest? While Gallant, Stanisich, and Balkenbush were all amazing, I think they are out of the running for Montana’s greatest. Ritter won the most singles titles, but People’s is not far behind and has more doubles. He also has the National Collegiate and Masters titles, so I am inclined to give Peoples the edge over Ritter. In one sense, it is tough to argue with Bob Brady, as he is in the USHA Hall of Fame and three National Open titles seems to trump any number of state titles. Still Peoples and Ritter do present an argument. Their consistent dominance for a sustained time was truly amazing. While I am inclined to rank them Brady, Peoples, Ritter, I am going to call it a draw. There can be no wrong answer when it comes to who is the greatest of these three.

— Don Foley is a local handball player and the Montana Handball commissioner. Contact him at dfoley71@yahoo.com.