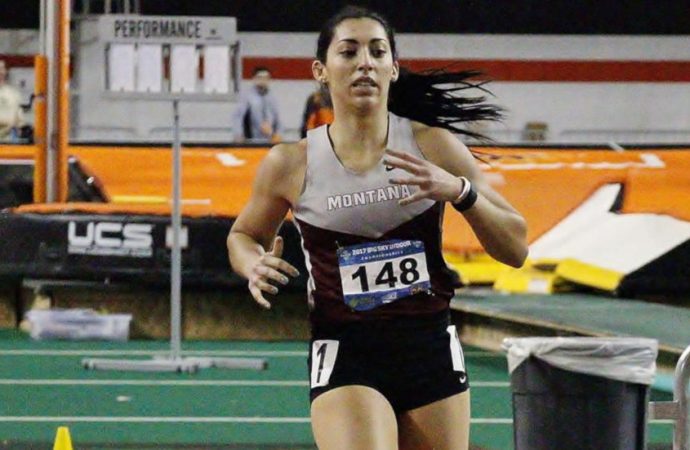 MISSOULA — Six for six. Montana entered six athletes into the multi-events and came away with points from all six athletes on Thursday, with Erika McLeod (heptathlon) and Brendan Thurber-Blaser (decathlon) winning Big Sky Conference titles.

The performances give Montana an early lead in the standings. In addition to Thurber-Blaser, freshman Aidan Diggs finished third and Josh Riley placed fourth in the decathlon, totaling 21 points for the team. It was much of the same on the women’s side, with Jansen Ziola and Jaree Mane finishing sixth and seventh, respectively, to give Montana 15 team points.

Throughout history, Montana has had plenty of success in the multis. The men won for the fifth time since the turn of the century. The women won for the sixth time in the past 16 years. Never before, though, have the Grizzlies been on top in both events at the same time.

“Today was a great day,” head coach Brian Schweyen said. “It’s hard to imagine a better start than this. These six athletes all took care of business with their teammates behind them and really set the tone for us.”

More than the history, the scores or anything else, though, are the stories behind the wins.

Two years ago in Sacramento, Thurber-Blaser was just moments away from jubilation. He had a sizeable lead in the decathlon entering the final event. Just 600 meters into the 1,500 meters race, however, his right hamstring locked up. Seconds later, his left hamstring followed suit, forcing the then-freshman to fall onto the infield. Determined to complete the race, after several minutes of work with the trainers, Thurber-Blaser limped to the finish line, finishing the decathlon in ninth place, after being so close to winning it all.

Fast-forward two years, after a redshirt season and even a partially torn Achilles that kept him away from training earlier this spring. Thurber-Blaser was back on the track and in a familiar spot. Here he was Thursday, once again on top of the leaderboard entering the 1,500 meters.

“It crossed my mind,” the redshirt sophomore admitted, “but not in a ‘What if it happens again?’ sense. More of a determination to win it this time. I was just really determined to give it my all.”

Thurber-Blaser had an 18-point lead over Montana State’s Wyatt Thompson-Siporen through eight of 10 events; to put how narrow of a lead that is into perspective, Thurber-Blaser finished with 7,154 total points.

The lead was trimmed to 13 after both athletes put up tremendous marks in the javelin. That led to the 1,500 meters — the final event — and Thurber-Blaser’s redemption.

Time didn’t matter, all that did was finishing ahead of Thompson-Siporen. For three of the four laps, Thurber-Blaser trailed closely behind his MSU counterpart, keeping pace each step of the way but not exuding too much energy. When the bell signaling the final lap rung, Thompson-Siporen turned it on, taking a three-stride lead, then more. It looked as if Thurber-Blaser was gassed and would have to settle for second place.

“When Wyatt took off with 300 to go, I thought Wyatt had a lot left in the tank, but Brendan obviously had more,” Schweyen said. “He dug down and found an inner driving force to pull it out.”

As they hit the final straightaway, the two were running beside each other stride for stride, before Thurber-Blaser was able to look back in the final 10 meters and realize what he was about to accomplish.

“I’m pretty speechless right now,” he said afterward. “I wasn’t the most-prepared guy here, but I wanted it. I was just trying to stay with him, stay relaxed. During those final 600 meters, he turned on the jets. I got a little nervous and had to dig down deep.”

For McLeod, now a six-time Big Sky champion — including twice in the heptathlon — her most-recent win is perhaps the most rewarding. First of all, it came on her home track, in front of family and friends. It also happened just 10 weeks after the senior injured her calf, which kept her out of indoor nationals after earning an invitation.

McLeod, a Butte High graduate, missed six weeks while treating the injury, and hadn’t truly had a full meet all outdoor season, doing events here and there but never really turning in a complete performance. She said Monday is when that changed, while competing in the hurdlers during a practice, when she realized that she was back and had the potential to put up big numbers for her team.

“It’s so special for me, because I really do have the most incredible coaches,” an emotional McLeod said afterward. “I’m going to miss them, and my teammates, the most. It’s fun being able to accomplish all of this, but truthfully, if I put everyone in a room who have helped me get to this spot it would be full. A piece of me feels like it’s their win, too.”

McLeod entered the day with a 113-point lead over Idaho State’s Ashley VanVleet-Sturgis, the defending champion. The lead grew during the first event of Day 2, when McLeod won the long jump with a huge mark of 19-5.25. The leap was the sixth-best by a Big Sky athlete this season. McLeod will have the chance to score additional points for her team on Friday when she competes in the standalone long jump event.

McLeod threw 113-7 in the javelin (fourth) before running a time of 2:22.33 in the 800 meters (third). McLeod led the race at the midway point and was hoping for a time that would score her enough points to qualify for nationals. She currently ranks 23rd nationally (top 24 advance), likely needing other athletes to pull out in order to advance, but she undoubtedly has left her mark at Montana and in the Big Sky Conference.

The Butte native won a conference title for the sixth time in her career, including the second in the heptathlon and fifth in the multis overall. She has three times been named a Big Sky Championships Outstanding Performer, including earlier this year in the indoor season.

Overall, McLeod placed in the top four in six of seven events across the two days, winning the high jump on Wednesday with the fourth-best height in the Big Sky this season (PR of 5-8.5).

Ziola, a two-time All-Big Sky performer in the indoor’s pentathlon, competed in her first outdoor Championships and finished sixth with a PR of 5,027 points. She won the 100-meter hurdles on Wednesday (PR 14.04) and placed second in the 200 meters (PR 24.57), third in the 800 meters (2:22.33) and fourth in the long jump (18-4.5). Sophomore Jaree Mane also scored for the first time in her career, finishing in seventh place with a PR of 4,844 points. She finished the meet with four lifetime bests and on Thursday placed second in the javelin (118-11).

Montana is off to a terrific start to the Big Sky Championships, and will look to carry the momentum forward Friday with 10 finals and 16 running prelims. Field events begin at 9 a.m., followed by running events at 12:30 p.m.

“Having so many athletes here watching I think just gets them excited for their turn,” Schweyen said. “Now everyone needs to feed off of what we accomplished today and keep it going.”