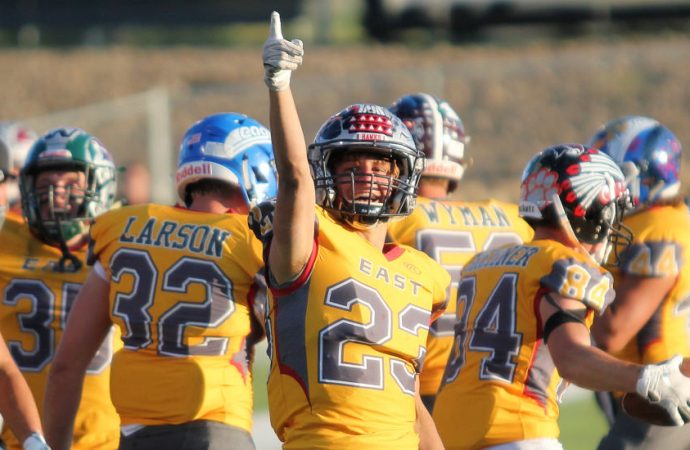 Fairfield players had a pretty fair feel for the playing field and fared on the field well on Saturday night.

Two Fairfield players scored all the East team’s touchdowns in a 28-22 victory over the West in the 73rd annual Montana East-West Shrine Game. It was played at Bob Green Field on the Montana Tech campus and marked the East’s second straight win in the series. The East leads the series by a 41-32 margin.

“For what this game does, I can’t walk out of here with my head down,” said West head coach Mike Cutler, whose regular football job is as head coach of two-time reigning state Class C eight-man champion Flint Creek, the combined Drummond/Philipsburg program.

The Shrine Game raises money for the Shrine Children’s Hospital in Spokane and a standing-room only crowd Tuesday night greatly aided the cause.

The spectators watched an entertaining game. It lived up to expectations for an all-star game involving Montana’s top football seniors from last fall’s high school grid season. A surge of three straight touchdowns carried East to the win.

“It was a blast,” said Fairfield receiver Derek Simmons, who caught two touchdown passes in the win, earning the East Offensive-Player-of-the-Game Award. “It was amazing to be able to support the Shrine in this.”

The TD catches –both from Lewistown quarterback Mitchell Norlien — were a 44-yarder in the first quarter and one of 14 in the third. The first one gave the East the lead. 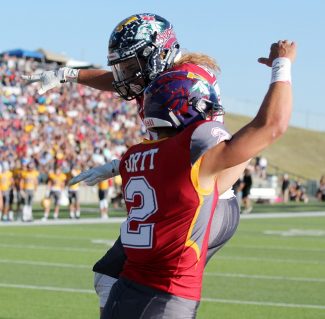 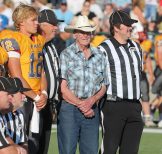 LeProwse gets ready to flip the coin just before kickoff of the Montana East-West Shrine Game July 20 in Butte. (Butte Sports file photo) 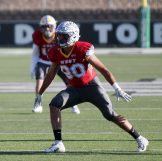 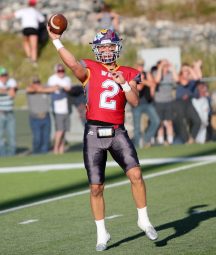 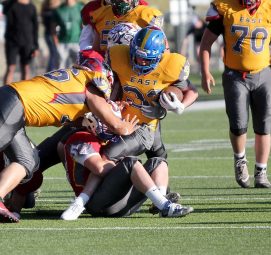 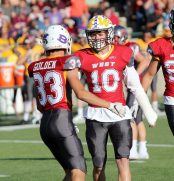 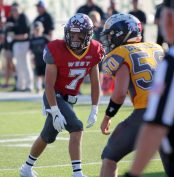 Butte Central’s Clay Fisher lines up in the slot for the West as East linebacker Ty Bradley of Colstrip defends. (Bill Foley photo) 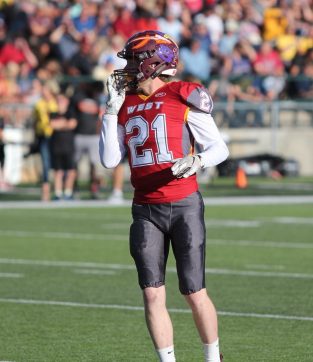 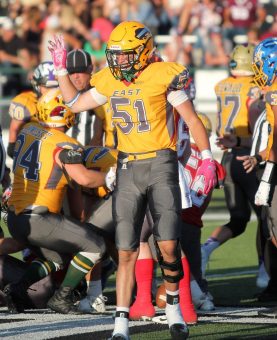 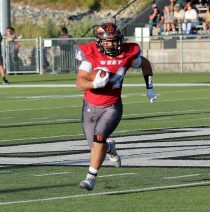 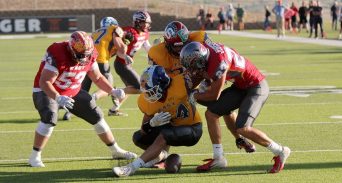 West defenders Alex Johnson of Helena, 23, and Nick Schmiler of Canada converge on East running back Andrew Lopez of Malta. Johnson recovered the fumble to set up a West touchdown. (Bill Foley photo) 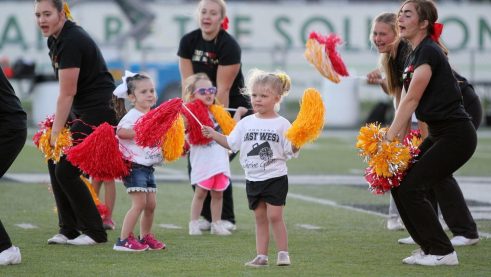 The West put up the first points on a 1-yard plunge after its first drive was denied, forcing a punt. Colton McPhee of Columbia Falls jumped on a bobble by the East to regain control at the 1. Quarterback Rylan Ortt slashed into the end zone.The extra-point kick attempt was blocked, but the West led 6-0.

The East retaliated, also spurred by a break. The West had a handoff mixup in the backfield and Kyle Torgerson of Great Falls High recovered the loose ball for the East. Four plays later, Norslien connected with Simmons on the first East TD. Wyatt Brusven of Shelby kicked the first of his four extra points and East held a 7-6 edge.

“On the first touchdown, (Norslien) just threw over the middle and I caught it because nobody was there,” Simmons said. “The second one turned out to be big game-changer. (Norslien) placed it perfectly in my hands.

“I scored two touchdowns, but the quarterbacks threw great passes.”

The play opened up a two-touchdown difference after the East held a 14-6 advantage at intermission. The team’s second TD was by Fairfield QB Ryder Meyer on an 8-yard run. Meyer played some receiver in the secondary to go with his sharing the quarterback spot with Norslien.  His fourth-quarter TD, on a 39-yard aerial play from Norslien, wrapped up the win.

Meyer is the son of Fairfield head coach Les Meyer and both he and Simmons starred in Fairfield’s state Class B championship season last fall. Les Meyer was rewarded with the head coaching role of the East team for Saturday’s game.

Norslien was picked the game MVP after passing for three touchdowns. The East’s defensive honoree for player-of-the-game was linebacker JJ Lindsay of Billings Senior.

West kept it close and had chances at the end, Cutler agreed and noted.

The team struck twice in the second half as Blake Counts blasted into the end zone from 10 yards away and behind good blocking. The score cut the lead to 21-12 and then the West drew to within two points, 21-19, with about 12 minutes left in the game. Colton McPhee snared a four-yard TD pass from Norsliesen while coming out of the backfield.

The East made sure the West was unable to sniff to closely to the goal line the rest of the way, and added the late Meyer TD for insurance. It stopped the West momentum before it ended scoring with Carver Gilman booting a 41-yard field goal a minute and a half to the final gun.

The West tried an onside kick to gain one more possession, but the East thwarted on a recovery at midfield and ran out the clock.

MacNeil is slated to play wide receiver at Montana Tech next fall, he said. The Flathead standout completed 13 of 14 passing attempts quarterback in Saturday’s game.

“It was a good opportunity,” MacNeil said. “Ever since I first started playing football at Flathead High School, I’ve wanted to play in the Shrine Game. It’s a dream come true to be named an offensive MVP.”

He promised his next turn on the Bob Green Field will be more successful.

“It’s little things that happened and things that didn’t go our way,” he said about the Shrine Game loss, “We knew it wouldn’t be perfect, but we knew everybody would play hard.”

Butte native Tom LeProwse of Bozeman was the grand martial for festivities and performed the coin flip. He lives, retired, in Bozeman and was one of the very first Shrine Game participants in 1947.

Next year’s East-West Shrine Game is scheduled to be played in Billings.