Butte High senior Cole Worley looks up after signing to play football at Montana Tech Wednesday morning in the Richardson Gym. He is seated between his parents, Deanna and Shane. His sister Maddie is also pictured.

Cole Worley looked up after signing an NAIA National Letter of Intent to play football for Montana Tech this morning and smiled.

The signing came about because Worley would just not take no for an answer. The 5-foot-6, 140-pound receiver was determined to play college football.

He considered signing with MSU-Northern, the only school that offered him a spot on the team until Montana Tech came calling late last month. The Orediggers, though, were Worley’s first choice, second choice and third choice.

“I’ve watched them since I was a little kid,” Worley said, adding that he used to be one of the kids playing football on the sideline during Oredigger games. “I was always running around on the field, and I’m super excited.”

Worley plays much bigger than his stature. Last season he caught 18 passes in for 215 yards in eight games. He turned a medium pass over the middle into an electrifying 65-yard touchdown that keyed Butte High’s home-opening win over Great Falls High.

He also caught six varsity passes as a junior and put on up a highlight real of touchdowns as a sub-varsity player for the Bulldogs.

Statistics, though, do not tell the story about a player known for his ultra-tough competitiveness.

“Cole has always bet on himself,” Butte High coach Arie Grey said. “When people have doubted him, he’s said, ‘I’m going to prove you wrong.’ That’s a great trait to have. As he goes on to this next phase of his life, having that attitude is going to help him quite a bit.

“He’s just a competitor, and he’s had to be,” Grey said. “When you’re the little guy, you’ve got to compete. Because of that, he’s willing to scratch, claw, bite, whatever he needs to do.” 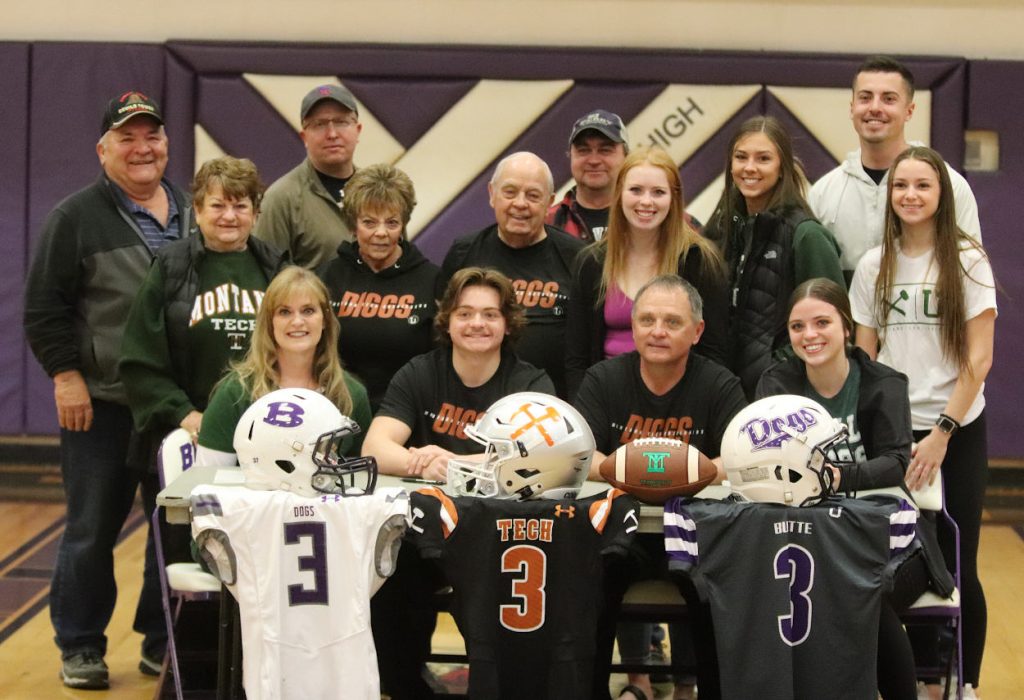 Worley is joined by his extended family.

Worley, an Academic All-State performer, runs track for the Bulldogs. He also wrestled the last two seasons. He was also a good baseball player as a kid.

Football, though is Worley’s love.

“There is nothing to not like about football,” Worley said. “Being around the guys, scoring touchdowns, the grind.”

That is why Worley was so excited when the Orediggers contacted him with the news he had been waiting to hear. Tech got in touch with him after Butte High’s Dahlberg Invitational track meet.

“It was awesome. I got the text, and I was so excited,” Worley said. “The text said they wanted to talk. I sent it to my parents, and I was like, ‘oh wow, he’s going to call me.’”

Tech coach Kyle Samson knows what it is like to be an undersized player. The former Helena Capital and MSU-Northern star quarterback is 5-7 “on a good day.”

“He’s obviously not the biggest kid,” Samson said of Worley, who will join Butte High classmate Cole Stewart with the Orediggers. “But for a person like myself, you can be successful if you’re quick and you’re tough. He also just checks all the boxes when you talk to Coach Grey and everybody who has ever worked with him just what kind of a person he is, what kind of student he is.”

Worley, who is leaning toward majoring in mechanical engineering at Tech, also played safety at Butte High. He said he will go wherever the coaches ask him to at Montana Tech.

Samson sees the shifty, quick Worley as a receiver. The coach said Worley is one of those players who appears to be even faster on the football field than he is on the track. He said Worley could be in the mix on special teams, possibly on kick offs or as a gunner on punts.

That, the coach said, could get Worley on the field sooner rather than later.

“I think he can help us on special teams early in his career because he’s a tough tackler,” Samson said. “He’s not afraid of anything. It will be difficult to block him in space one on one.”

Worley, who signed with his parents, Shane and Deanna. His sister Maddie, a 2019 Butte High grad who stood out in volleyball and track for the Bulldogs, was also there, as were a ton of extended family and about 60 Butte High teammates.

Everyone there was on the same page when it came to Worley. They knew this day would come, and they just know he will do big things for the Orediggers.

That includes Samson, too.

“The No. 1 thing that stands out to me is his toughness, his competitiveness,” the coach said of the newest Oredigger. “He’s a kid that’s ultra-quick, too. He just does things when he gets the ball in his hands. He makes plays.

“It doesn’t matter how big he is, he’s going to go out and compete, and he’s going to win. We’re excited as heck to have him at Tech.”