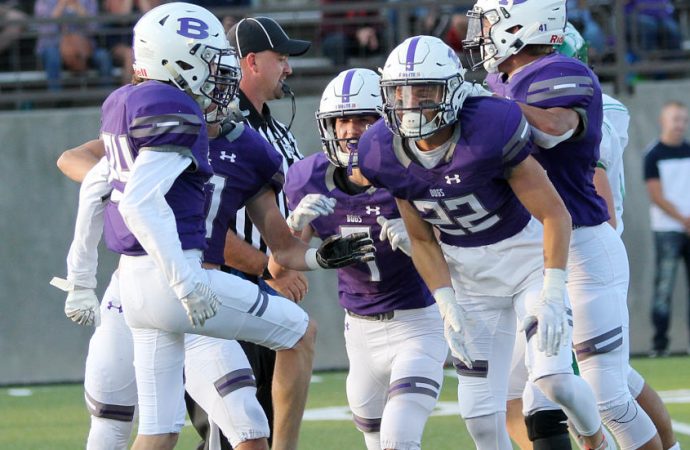 It turns out that it only seemed like Kameron Moreno was carrying the load.

“My offensive line makes me look better than I am,” insisted the senior Butte High workhorse ball-toter after his infantry grind led the Bulldogs to a 35-27 football victory over Helena High Friday night. (Stats)


The game was played at high school football centerpiece Naranche Stadium and opened the Western AA portion of the schedules for both schools.

“Our offensive line did a great job,” the 5-foot-9, 200-pound chunk of Butte ore said after crashing, tunneling, pushing, speeding and romping for a touchdown among his 165 yards on 36 carries.

The plan, Moreno acknowledged, was to wear the Bengals out with ground game and screen passes and senior star quarterback Tommy Mellott executed according to blueprint.

Both teams were undefeated going into the clash watched by about 3,000 spectators. Both teams — second-ranked Butte High and fifth-ranked Helena High — showed why.

“Hat’s off to our guys for battling and finishing,” Arie Grey, head coach of the Bulldogs said. “Hat’s off to Helena, too, for the game they played. Their young quarterback is going to do some big things.”

The young quarterback has a familiar name in these parts. Sophomore Kaden Huot is the son of former Anaconda and Oregon State standout Tony Huot.

“Defensively, we got some good stops, but they were out there too long,” Grey said of the members of the Butte High defense. “On offense, we had two good drives at the beginning of the third quarter that will help us later on.”

Mistakes occurred, but the win was earned.

Butte High led all the way.

The teams punted away their first possessions and then Montana State commit Mellott directed the Bulldogs to the end zone. He broke a 13-yard run to his own 32-yard line on first down and then flipped a pass to Ryan Neil, serving notice to the Bengals they would have a lot to watch on defense the rest of the night.

The drive ended with Moreno smashing two yards into the end zone and Casey Kautzman kicked his first of five extra points.

The fans strapped in for an exciting game.

“Kam and our offensive line did a great job (in the gameplan) tonight,” Grey said. “We were spreading the ball out to a lot of guys, looking to get them into the attack. Each week, we find different creative ways to find those faces.”

It was important in this case, Grey said, to establish ground rights.

The quarter ended with Butte High the one-point edge and Bulldog lead was 21-12 at halftime. Mellott fired a strike to 6-foot-7 junior tight end Jake Olson crossing the back of the end zone six plays into the second period. The Bengals answered two possessions later with a pass play  to Miller from Ferguson that covered 12 yards.

Butte High, though, struck again just before halftime when Mellott angled a throw to Quinn Sullivan in the front corner of the end zone. The 4-yard connection was completed 8 seconds before intermission.

Mellott went on to finish with an even 200 yards in passing, linking with receivers on 17 of 26 aerials with no interceptions. His had a direct hand in four touchdowns, throwing for two and running for two. He gained 70 yards on the ground.

The Bulldogs’ TD with 12 seconds to go in the third quarter was the only score of the frame. Rylan Richards’ one-handed falling backwards interception gave the Bulldogs possession at the Bengals’ 49-yard line. Mellott QB’d a ground game that ended with him diving from a yard out on a keeper. Butte High led 28-12 with a quarter to go.

Helena High clawed closer with a 17-play drive capped by  a Huot pass on the left flank to running back Logan Brown. It went 11 yards for a touchdown and the two-point conversion by Ferguson narrowed Butte High’s margin to 28-20. The clock still had eight minutes on it.

A time-consuming 92-yard drive Mellott engineered spread the Bulldogs’ lead to necessary proportion. Butte High collected five first downs on the march and got a big play when Mellott flicked a screen pass to Neil that ended up being a 24-yard gain to the Bengals’ 6-yard line.

Moreno blasted four yards before Mellott burrowed in from the 2.

Kautzman kicked his fifth extra point and Butte High had a 35-20 command with 3:48 showing.

The defense didn’t stop Helena High, but it slowed the Bengals’ response march. They needed 10 plays to go 55 yards. Huot rolled left and took off, slashing his way 15 yards to the end zone. The difference was 35-28 with 1:55 to go.

Neil covered the ensuing onside kick for the Bulldogs.

Mellott knelt twice and Butte High was 3-0 for the season.

“I thought this was a good test for us,” said Grey, who added that this is his first 3-0 start in his 11 years as head coach. “We were good in a lot of phases, but there are some things we need to correct.

“We have a long ways to go to get where we want to be. We have to keep getting better everyday.”

Tackles leaders were Sullivan with 10, including seven solos, Tanner Huff with seven and Tucker LeProwse with six. Scout Allen registered a sack on a safety blitz, and Aidan Lee shared a sack with Kobe Moreno. Sullivan, LeProwse and McClafferty also had tackles behind the line of scrimmage.

Brown gained 90 yards on 16 carries for Helena. Huot passed for 247 yards, completing 18 of 33 attempts. Miller was the leading receiver with 122 yards on eight catches. KeyShaw Newby had the Bengals’ only sack, Zachary Evans led them in tackles with 15, of which 11 were solo. Ferguson was in on 10 tackles.