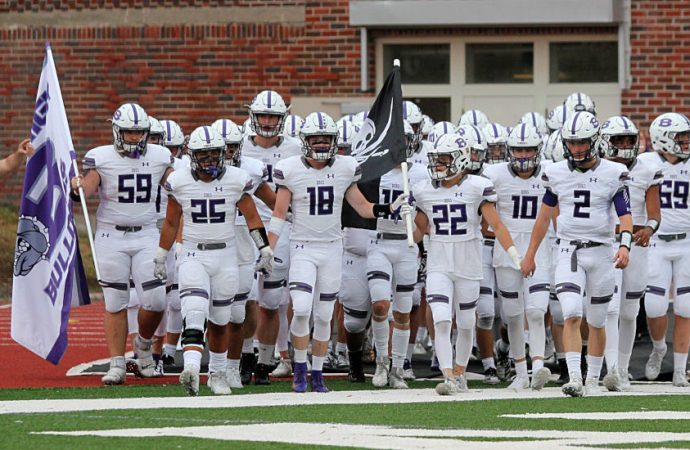 One week after burning Belgrade for two touchdowns, Butte High senior receiver Quinn Sullivan did not register a catch for the Bulldogs in their 52-21 win over Great Falls Russell.

That stat — or lack thereof — had to be surprising to observers of Montana’s Class AA football.

For the No. 2-ranked Butte High Bulldogs, Sullivan’s lack of catches in Great Falls was not reason to sound the alarms. In fact, they see it as a good thing.

In putting up perhaps the most efficient offensive performance in school history — in nine drives, the Bulldogs scored seven touchdowns, kicked a clock-beating field goal and took a knee — Butte High showed off just how deep they are in the offensive weapons category.

“We don’t necessarily say, ‘Hey, we’re going to throw the ball to this guy,’” Butte High coach Arie Grey explained. “It’s all about reading defense. Quinn had a really good game offensively, pushing the top off the coverage, blocking, doing things like that.”

With Sullivan serving in every other capacity besides catching the ball, senior Peyton Hettick caught seven passes for 98 yards. Junior Ryan Neill grabbed six for 77 yards.

“Everybody has their part,” Grey said. “Right now offensively, everybody is doing their jobs. There’s a lot of things we’ve got to get better at. We’re still not where we need to be offensively. I think we can get there.”

Grey said that senior quarterback Tommy Mellott has been so good finding different targets through the first two weeks is a product the “maturation of the quarterback.”

Last week, Mellott threw for 335 yards and ran for 121 more, including a 60-yard touchdown gallop.

“Each week is a little different based on what the defense is going to give us,” Grey said. “Each week it could be a different guy who is going to step up and make plays for us. We’re spreading the ball out. It makes it difficult on teams. We’re trying to put stress on teams one, by tempo and two, by there’s not just one guy whose going to get the ball.”

Grey said to expect those three backs to get carries again each week. However, one might take over as the season moves on.

“It’s going to get to what’s the hot hand,” Grey said. “That’s what you want. It might be somebody different each week.”

“We know what we get from our backs. They run downhill,” Grey said. “The nice thing we have is they are a threat out of the backfield. That’s something we’ve worked hard on because that’s something we were lacking last year.”

Another Butte High weapon is sophomore kicker Casey Kautzman, who was perfect on PATs last week. Kautzman also easily drilled a 43-yard field goal as time expired in the first half.

Grey also praised his team’s defense, a unit that he called young and inexperienced going into the season.

“The defense is playing really well,” Grey said. “We’re really good on third down. We were really good in the red zone last week, which is what you want.”

Grey said his defensive unit has plenty of room to improve, however.

“We do need to create more turnovers and continue to grow in stopping the run,” he said. “I’m proud of what the defense has done, and they’re going to continue to get better.”

Sullivan and junior Aidan Lee each have a pair of sacks on the season. Senior Dylan Averyt and Kingston, also a senior, each got in one.

In all, 14 Bulldogs have at least six tackles through two weeks. Huff and junior corner Billy Kelly each have an interception.

The Bulldog defense will have to be up to the task to top the Bengals, who also opened the season with wins over CMR and Belgrade.

Butte High expects the Bengals to try to run the ball, with senior Hayden Ferguson leading the way. Ferguson has racked up 296 yards on the ground through two weeks.

Sophomore Kaden Huot will play quarterback for Helena. He has thrown two touchdowns and one pick.

“When you turn on the film of Helena High, it’s the same Helena High we’ve seen for a long, long time,” Grey said. “Coach Evans is in his second year, carrying all the things Tony (Arntson) did. They play physical football. They are going to run the ball, they’re going to play action, and you know you are in a dog fight.”

The Bulldogs will be on the road the next two weeks, traveling to Kalispell Glacier and Missoula Sentinel. Butte High’s next home game at Naranche is when the Bulldogs celebrate homecoming against Helena Capital on Oct. 4. 1 comment