Butte High has already secured a spot in the Class AA football playoffs.

A win Thursday at Missoula Hellgate would guarantee the Bulldogs at least one playoff game played at Naranche Stadium.

That, per usual, comes as a surprise to Butte High coach Arie Grey, who does not like to use the world “playoffs” until after the regular season is all the way over.

Instead, the coach said he is focused on seeing his team continue to improve as they take on the Knights at 7 p.m. at Missoula County Stadium. (Radio: KBOW, 550 AM, 101.5 FM, kbow550.net or on the KBOW app.)

Butte High is looking to build on last week’s 20-17 home win over Kalispell Glacier. If the loss two weeks ago to Helena Capital was maybe the most disappointing loss in Grey’s 14 years at Butte High, last week’s rebound might have been his most satisfying.

“I was proud of our kids,” Grey said. “They just battled.”

Butte High enters the game at 5-2 overall and 4-1 in conference. Hellgate comes in at 2-4 and 1-3. The Knights had a game wiped out because of COVID.

The Bulldogs own a nine-game winning streak over the Knights and a 26-6 edge all time. These Knights, however, are no pushovers. (Hellgate roster; Butte High roster)

Hellgate is in a battle for the final playoff spot in the Western AA, and the Knights have put up 186 points in six games. That is an average of 31 points per game, and it includes the games against Helena High and Helena Capital in which the Knights were held to six points.

“This week is another challenge,” Grey said. “Now you’ve got a team that likes to throw it 70 percent of the time and a defense that’s aggressive.” 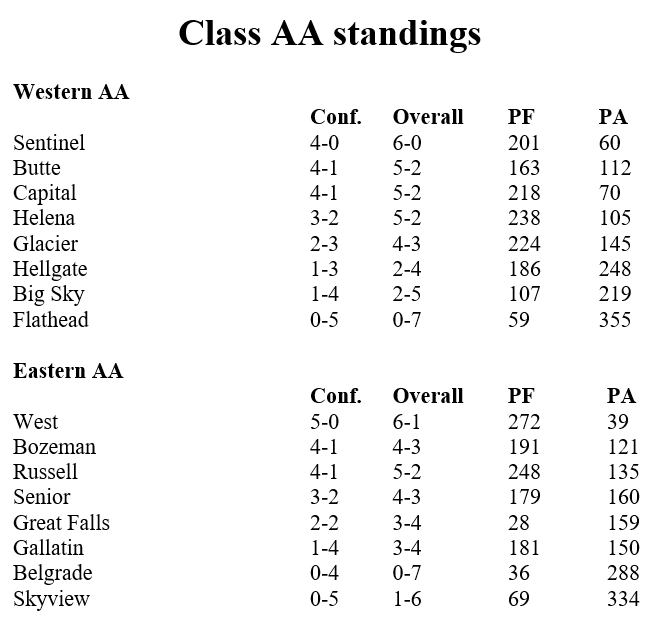 Hellgate is led by a pair of players with deep ties to the Mining City in junior quarterback Connor Dick and senior receiver Ian Finch.

With Butte High junior Cameron Gurnsey sitting out last week with an injury, the 6-foot-3, 195-pound Finch took over the lead in the state in receptions and receiving yards. Finch has caught 50 passes for 784 yards. He also leads the state with 12 touchdown receptions.

“They’re really talented in the passing game,” Grey said. “Connor does a good job getting the ball out of his hands and into his playmakers hands. We have to do a great job communicating on all three levels.”

“He’s a heck of a little player, also,” Grey said.

One reason Grey was so happy last Friday was that his team overcame a rash of injuries to get the win.

Tierney is the heart of Bulldog line on both defense, too, so Butte High was basically without three starters on both sides of the ball for a prolonged time.

“I’m really proud of the kids the last couple of weeks,” Grey said. “They used that next man up mentality.”

“Gavin was a physical running back,” Grey said.

Butte High is looking to have Snyder and Gurnsey play together for the first time in three weeks. The duo has combined for 69 receptions and nearly 1,000 yards. Gurnsey ahs 45 catches for 608 yards, while Snyder adds 24 for 378.

Senior linebacker Keegen Muffich leads the Bulldogs with 71 total tackles. That includes seven tackles for a loss and a sack.  Muffich and fellow senior linebackers Connor Konda and Luke Anderson have thrived behind a line that includes Tierney, Klobucar, Mulcahy, Snyder and seniors Marcus Manson and Max Demarais.

Senior Holt Downey and junior Wiley Dallaserra have started and performed well in the secondary. Dallaserra picked off a pass that led to a touchdown last week.

Senior Jakob Nielsen and junior Ethan Cunningham filled in well in the Bulldog secondary for the injured players.

Senior Casey Kautzman leads Butte High’s special teams. In addition to his accuracy and long range as a place kicker, his kickoffs and punting have been weapons for the Bulldogs.

Grey did not say which banged-up players would return this week. Boyle is out for the season, but the coach said everyone else is making progress.

“We’re pretty close to having everybody back,” Grey said. “You have to deal with those things, and our kids responded. I was extremely proud of our entire program the way they handled it.”

Butte High also handled the schedule change for special Thursday game, which will be Senior Night for the Knights. He said it helps his players and coaches not overthink things.

“It’s a short week, which I think the kids kind of like,” Grey said. “You get in and get out, and it’s game time already.”

Butte High will play a Thursday game next week, too, when the defending Class AA state champion Missoula Sentinel Spartans come to town for the regular-season finale.

If Butte High can take care of business this Thursday, a first-round bye will be on the line next Thursday.

The top six teams from each division advance to the postseason. The two two teams receive byes.