Dogs focused on Rustlers, themselves for Week 2 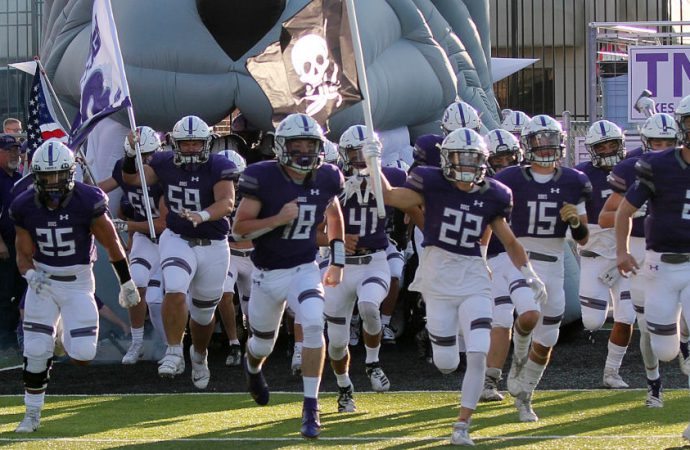 Butte High’s football team will be facing two opponents Friday night as they head to Great Falls to take on Great Falls Russell.

The No. 4 Bulldogs will be battling the Rustlers as well as themselves in the non-conference game.

Arie Grey, Butte High’s 12th-year head coach, came away very happy from last week’s 46-20 win over Belgrade at Naranche Stadium. However, the coach said his Bulldogs were far from perfect in their season opener.

“We have a lot of good things that we saw on film, then a lot of things we have to make improvements on. That’s what we want to be doing every week,” Grey said. “Everybody thinks  you’re going to play a perfect game. That’s just not possible.”

Grey said Butte High will try to avoid the lulls they saw in last week’s game that allowed the Panthers to make the score look much closer than the game really was.

That might be a reason why Butte High fell one spot in the Treasure State Media Poll.

That task, the coach added, is easier said than done during the week in which classes started at Butte High.

“There’s a lot of distractions. School starts, we’re going on the road for the first time,” Grey said. “We’ve got to make sure we focus in and do those little things like getting to bet on time, making sure that we’re taking care of our bodies.”

Senior quarterback Bryce Nelson hit classmate Keegan Barnes for a pair of touchdowns to lead the Rustlers, who are looking to rebound from last year’s 2-8 campaign.

Grey said he expects to see a disciplined and motivated team in CMR.

“Coach Lowery was an assistant for coach (Jack) Johnson for so long. He took over the program and he kept a lot of the same traditions. With CMR, you know you’re going to get tough, hardnosed guys. You’re going to get guys who are going to play the game the way it’s supposed to be played.”

Butte High senior quarterback Tommy Mellott was nearly perfect for the first half against the Panthers last week.

Mellott completed his first 10 passes on his way to racking up 332 yards and five touchdowns.

He hit seven different receivers, including four for scores. Classmate Quinn Sullivan — who had a monster game on offense, defense and special teams — caught two TD passes, while Ryan Neil, Banner Cetraro and Cory West each grabbed one.

“That’s what we want to do,” Grey said. “We want to spread the ball around.”

McClafferty and Kingston are seniors, while the other lineman are juniors.

Sullivan, Avert and Kingston each registered a solo sack.

Grey praised his big men after looking at the game film.

“What I thought defensively what we did a nice job of is we got to the quarterback,” Grey said. “Three sacks and six tackles for a loss. That’s huge. That’s what you want.

“Offensively, we didn’t give up a sack, and we lost four total yards.”

The Bulldogs are also expecting big things on defense from the Moreno brothers and junior Tucker LeProwse at linebacker and juniors Billy Kelly, Tanner Huff and Rylan Richards in the secondary.

Sophomore Casey Kautzman handles the kicking duties, while Mellott is the punter.

Grey pointed to special teams as an area that should see improvement from Week 1 to Week 2.

“Special teams wise, we need to take that jump,” the coach said. “In fall camp you really don’t get a lot of live reps on special teams. We got a lot of good teach tape off of that, and we’ve got some things to work on.”

Overall, the team must eliminate the mistakes from the opener, the coach said.

Next week, the Bulldogs open Western AA play against No. 5 Helena High at Naranche Stadium. That starts a stretch of seven straight weeks of conference games.

Grey said the Bulldogs will, like last week, use the non-conference game to look at a lot of players.

“It was a great evaluation tool for us, and we’re going to use this week as the same thing,” Grey said. “We’ll play a lot of guys. That’s what I really like about these non-conference games. You get to focus on position battles.”