MISSOULA – Butte High’s Abby Dodge capped off a strong State Class AA track and field meet Saturday with a third-place finish in the triple jump and a strong showing in the 100 hurdles finals.

Billings West swept the team results, as the Golden Bears saw their boys hold off crosstown rival Billings Senior down the stretch. West’s boys had 94 points, Senior had 86 and Helena notched 69 for third. Among the girls, West tallied 83, Kalispell Glacier had 65 and Missoula Sentinel recorded 58.

Butte’s girls ended up with 16 points, 14 of which came from Dodge, who was second in the long jump Friday and third in the triple jump on Saturday. Hailee Regan’s fifth-place finish in the shot on Friday accounted for Butte’s only other points.

Butte High’s boys finished at the back of the pack, but not without strong performances by the eight Bulldog boys who qualified for the meet.

“Everyone ran really well,” Butte High head coach Arie Grey said at the conclusion of the meet. “We saw a lot of personal bests this weekend and I couldn’t be more proud of the kids.”

Dodge started off her day with the 100 hurdles finals, and though she didn’t reach the podium, she hung with the pack and finished eighth. The productive part of her day came in the triple jump pits. 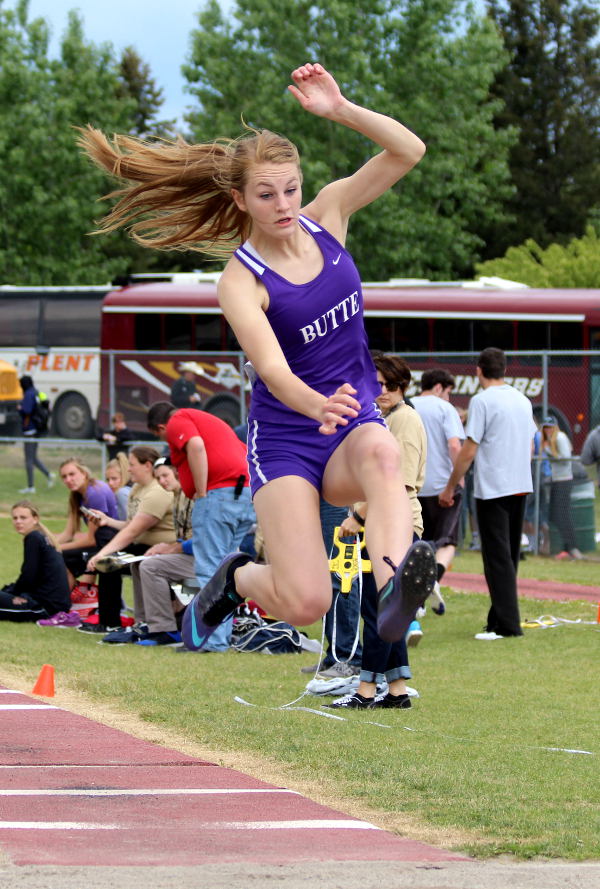 Following good preliminary showings in the event by Mijah McLeod, Caitlin Carmody and McKenna Wednt, Dodge shook off the hurdles and got to work. Dodge reached the finals in fourth place with a mark of 35-7.5 and stayed there until her final jump of the event, where she kicked in and measured a hop, skip and jump of 36-1.

“I was a little nervous there,” Dodge said with a wide grin after accepting her second medal of the meet. “I was hoping to go 37 feet, but there’s next year. Hopefully I can get some wins.”

She came about as close to a win as possible on Friday, as her mark of 17-5.5 was the same as that of Glacier’s Brynn McChesney, but the Wolfpack jumper got the winning nod on criteria due to a longer jump earlier in the event.

Dodge, who is just completing her junior year at Butte High, said she’s looking forward to a busy summer of sports camps and track club events. 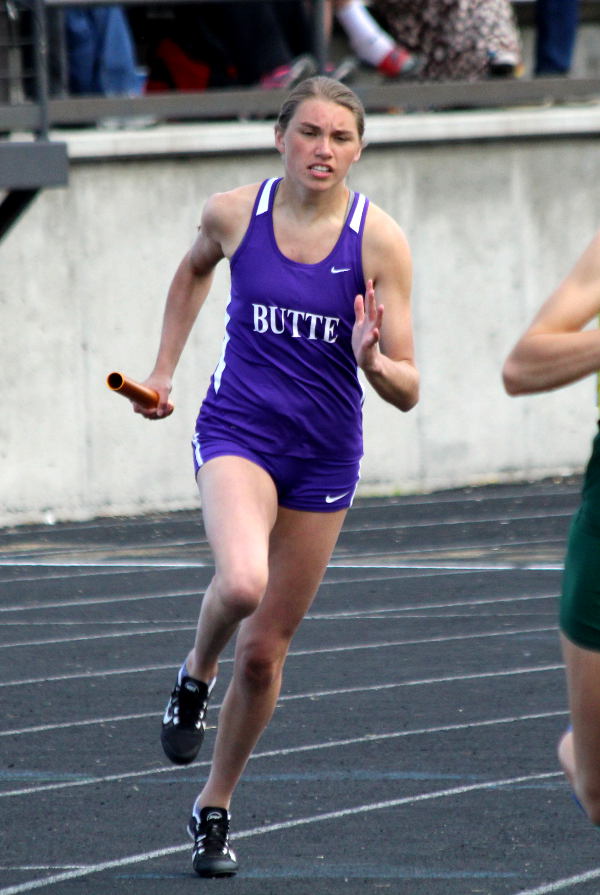 Butte distance specialist Joby Rosenleaf was the only other Bulldog girl to compete in an individual event Saturday, as she ran the 1,600 in a very strong field. The mile was won by Senior’s Christina Aragon, who broke her own all-class record in the event with a time of 4:43.51. 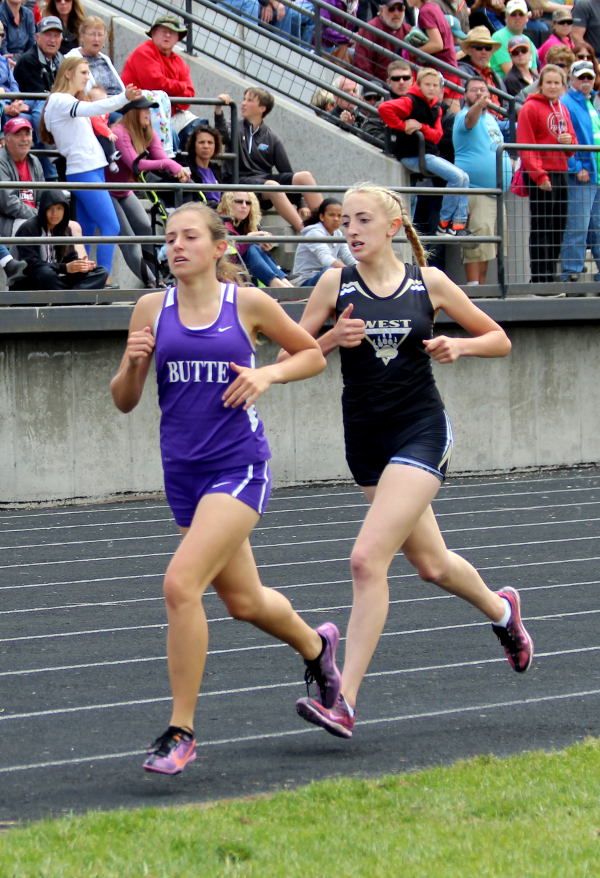 Joby Rosenleaf of Butte High competes in the 1,600 on Saturday in Missoula. (Pat Ryan photo)

Aragon ran the fastest high school 800 in the country on Friday, setting a new all-class state standard with a time of 2:05.65, breaking her sister Danielle’s record by nearly three seconds. She also set a new all-class time in the 3,200 by almost three seconds, and was expected to push for a new 400 record (she holds the top Class AA time), but a false start ended her hopes in the event.

No rain fell on the two-day event, but a whole lot of records did.

Helena’s Connor Matthews erased the 28-year-old 400 record with a new all-class best time of 47.75 seconds, while Flathead’s Jake Perrin timed a new all-class best in the 1,600 in 4:12.06. Perrin then went on to erase the old 3,200 mark by eight full seconds. Billings West’s girls sprint relay team tied the all-class record of 43.38 on Friday as well.

The Class C meet, held in tandem with the AA, also saw a number of new records. West Yellowstone’s Bailee Parker established a new Class best in the 3,200 with a 10:31.82, and did the same in the 1,600 with a 4:57.09. The Seeley-Swan mile relay team set a new class record with their win in the event Saturday, while Kimberly Earhart of Plains set a new class record in the javelin. Plains teammate Leah Thompson, headed to BYU for track, set a new all-class mark in the discus, adding an inch to the previous record with a spin of 154-11. 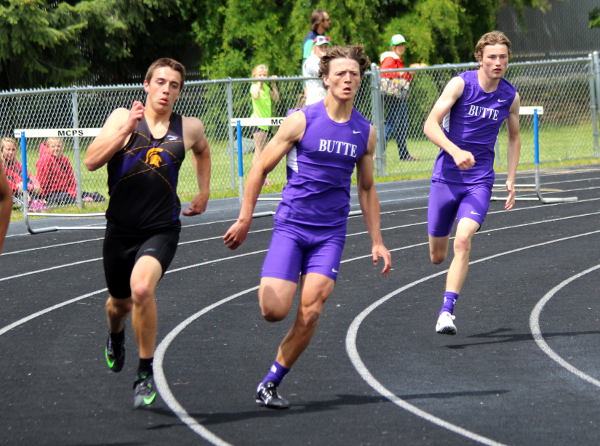 Butte’s boys saw Quinn Dennehy and Bryce Gallagher put in a solid effort in the 300 hurdles. Gallagher improved his personal best time by nearly a second, clocking in at 40.63 seconds to win his heat. The time fell to eighth place after the second heat, however.

Gallagher then joined a trio of freshmen in the mile relay, where the team posted yet another season-best time. Josh Neil opened up with a 54-second 400, followed by a 52 from Gallagher. Jake Vetter and Trevyn Roth each clocked 54s to close out the season for Butte High’s boys. 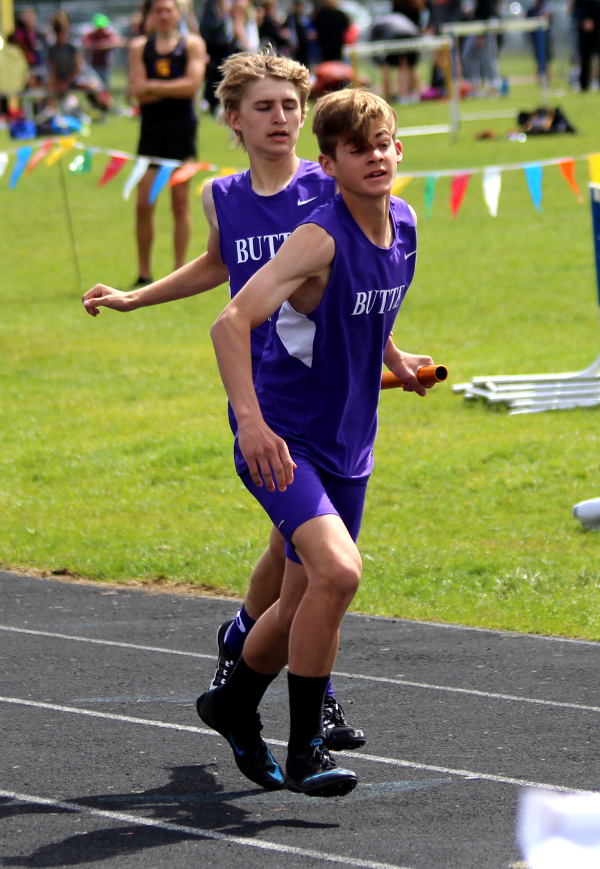 Coach Grey is already looking forward to next season, when Charlie Merrifield Track will be the site of the 2017 Class AA State meet.

“It’s sad to see our seniors go,” he said. “Mijah has been great, and it was good to see Quinn (Dennehy), Justin (Best) and Matt (Merzlak) make it to State. But we have a lot of good younger kids. We’ll get back home and work to get more of them qualified.”