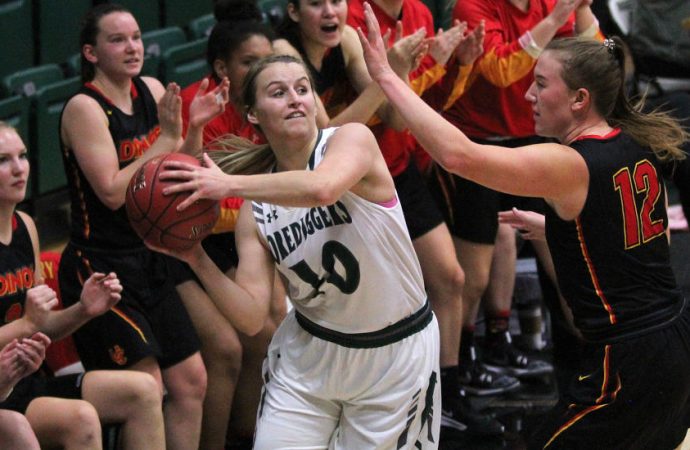 Mollie Peoples of Montana Tech gets off a desperation shot from the corner as time expires in the first quarter Saturday night at the HPER Complex. Erin McIntosh of the University of Calgary defends. (Bill Foley photo)

The Montana Tech women’s basketball team got off to an exciting start tonight at the HPER Complex.

A desperation 3-point attempt by Mollie Peoples at the buzzer was just off, and the Orediggers fell 56-53 to the University of Calgary. (Stats)

Montana Tech coach Carly Sanon said she liked what she saw for the first time out — especially playing against a Calgary team that is now 7-0. The Dino’s beat Rocky Mountain College 76-44 Friday night in Billings.

“Calgary is really good,” Sanon said. “Last year they won 21 games. They had a huge win last night over Rocky. “We’re going to get better from this game, without a doubt.”

That, of course, is what the preseason is all about. Tech does not open Frontier Conference play until Dec. 3, when the Orediggers play Carroll College in Helena. 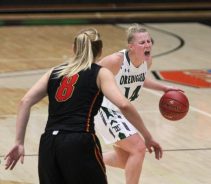 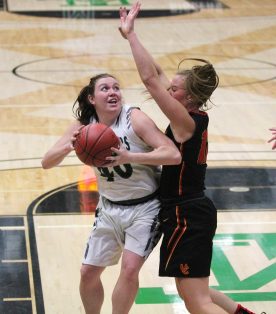 Mollie Peoples of Montana Tech gets off a desperation shot from the corner as time expires in the first quarter Oct. 19 at the HPER Complex. Erin McIntosh of the University of Calgary defends. (Butte Sports file photo) 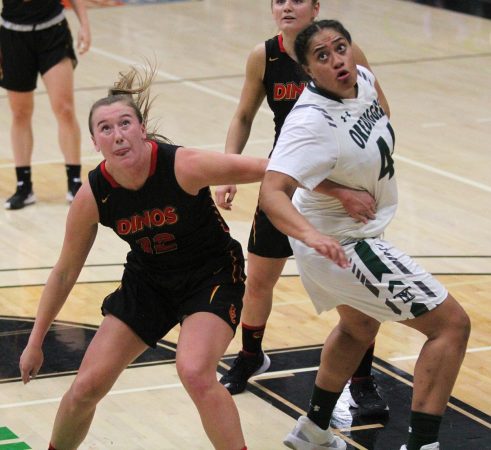 The Orediggers erased a pair of big deficits against Calgary. The first came after the Dinos started the game on a 9-0 run.

Tech battled back to tie the game at 17 on a pair of free throws by Kaylee Zard.

The Orediggers tied it again at 21 on a 3-pointer by Peoples. Tech took its first lead at 24-21 on another long ball by Peoples, the junior Butte Central graduate.

Tech built a six-point lead at 29-23 when on another peoples bucket, but the teams went into halftime tied at 29.

The final frame saw one tie and eight lead changes before the Dinos took the lead for good on back-to-back buckets by Reyna Crawford and Liene Stalidzane.

Despite not being able to hang onto the lead, Sanon said her team showed her something by battling back in the second half.

“One thing we’re really focused on is having a court leader,” Sanon said. “Last year we didn’t have any seniors. This year we only have one. (Zard.)

“When they got up big in the second half, and that could have gone bad for us,” Sanon added. “But I felt like we had people step up and I saw that we do have leadership. We battled back, tied it, kind of went back and forth.”

Stalidzane scored 12 points to lead the Dinos, who got 12 from Bobbi-Jo Colburn, eight from Erin McIntosh and seven apiece from Katie Upham and Crawford.

Zard, who had major ankle surgery in the offseason, contributed with seven points and eight rebounds, Danni Urick scored two, and Hope Lalau tossed in one.

Heggie left the game with an injury and did not return.

Sanon said the team was victim of some “first-game jitters,” but overall the team held up.

“I like the way we competed,” the coach said. “I knew it was going to be a tough game. We want to win as many as we can in the preseason, but we also want to prepare for our league, which is super tough.”

The Orediggers will play two home games next weekend. They take on Salish Kootenai College on Friday before battling the College of Idaho on Saturday.