Dillon's Ainsley Shipman poses for a photo with her parents, Randy and Kathy, after signing to compete in track for the University of Montana Thursday at the B. W. Lodge Gymnasium. (Courtesy photo)

DILLON — Thursday was a monumental day for a couple of state champion Dillon Beavers.

Ainsley Shipman and Treyton Anderson signed NCAA National Letters of Intent to continue their track & field careers at the next level. Shipman signed with the University of Montana, while Anderson will take his talents to Brigham Young University.

“It was really awesome,” Shipman said. “I’m really excited about it.”

Shipman is the daughter of Randy and Kathy (Stergar) Shipman. She has deep family roots in Butte and Anaconda.

“I have just a lot of relatives,” she said with a laugh.

The signing of Shipman comes while she still has two sports seasons left of her brilliant career at Beaverhead County High School — basketball and track. If COVID-19 had not wiped out her sophomore track season, Shipman would be on pace to earn 12 varsity letters.

Also on Thursday, Shipman was named All-State in volleyball, and she has excelled on the Beaver basketball team since her freshman year.

It is on the track, though, where Shipman made a name for herself from Day 1.

As a freshman, Shipman won state titles in the 100- and 300-meter hurdles. She also placed second in the triple jump and ran a leg on Dillon’s fourth-place 1,600-meter relay team.

Last spring, Shipman won the triple jump with a mark of 36 feet, 8 inches. She also placed second in the 100 hurdles and long jump, fifth in the 300 hurdles and sixth in the high jump.

She placed just behind friend and rival Rileigh McGree of Butte Central in the 100 hurdles and long jump. McGree officially signed with the Grizzlies on Tuesday.

“We are pretty good friends,” Shipman said. “I’m really excited she is going to UM, too.”

Shipman, a 4.0 student who is considering majoring in political science with an eye toward law school, visited the Missoula campus in September. She verbally committed in October.

She said she is not sure if she will become a multi-sport athlete or focus on a few events.

“I’m just being recruited for hurdling and jumping,” she said. “The coach said I could explore the multis and see how it goes.”

Shipman said that it was special to share the day with Anderson. The two signed in front of family, friends, teachers, coaches and classmates at the B.W. Lodge Gymnasium.

“It was really cool,” Shipman said. “We’re pretty good friends, so it was nice to do it with him.” 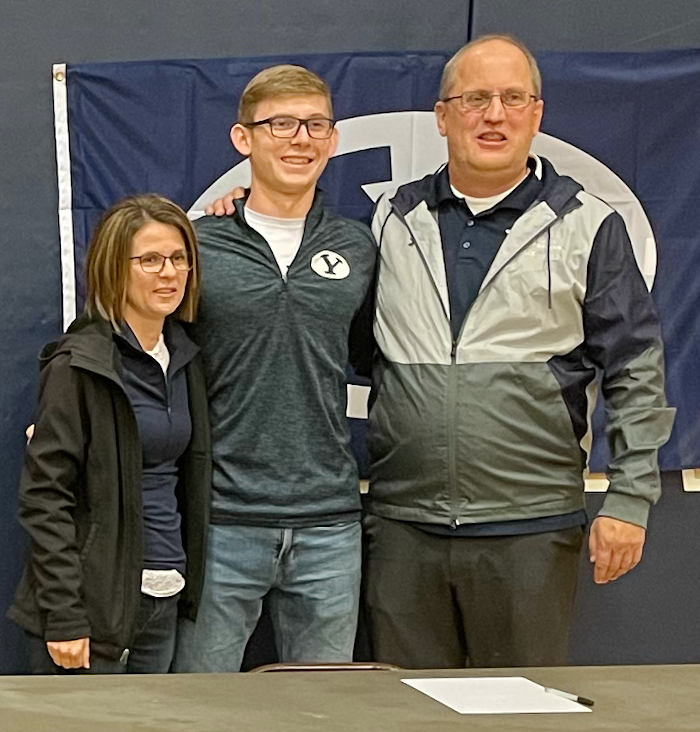 Treyton Anderson poses for a photo with his parents, Julaine and Jeremy, after signing with BYU. (Courtesy photo)

Anderson is also coming off a highly-successful Class A State meet, where he claimed state titles in the 110- and 300-meter hurdles races.

In all, Anderson took home seven medals — the most possible — in the Laurel meet.

“It was a tough couple of days, but it was worth it,” Anderson said.

As a freshman, Anderson ran a leg on Dillon’s first-place 1,600-meter relay team.

Anderson, who lived in Whitefish before his family moved to Dillon about six years ago, said Thursday was special day.

“I’m really excited,” he said of signing with the NCAA Division I program. “Ever since I was little, track has been my favorite sport. Ever since I was a little kid, I wanted to compete in college, and to be going to a DI school is just awesome.”

Anderson, the son of Jeremy and Julaine, went to basketball practice after signing. He also played cornerback and receiver on the Dillon football team.

This year, 6-foot Anderson is rejoining the basketball team after taking last season off to focus on track. He ran several indoor track meets, and that put him on the radar of some big schools, including BYU.

“I’m super excited. It’s going to be a lot different, but exciting to be there,” Anderson said of heading to the Provo, Utah school. “I’ll be around a lot great athletes who can push me.”

A 3.86 GPA student, Anderson said he plans to study something to do with business at BYU.