Diggers to honor seniors in rematch clash with Western 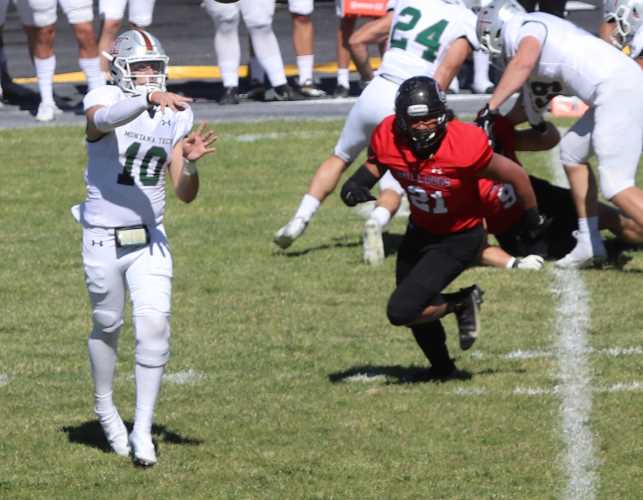 Even if so much wasn’t on the line or available for Montana Tech’s football team, Saturday’s game with Montana Western would be one of the more important ones on the schedule, Montana Tech head coach Kyle Samson indicated.

The game featuring the NAIA 20th-ranked Orediggers against their Southwestern Montana rival Montana Western Bulldogs is set for a 1 p.m. kickoff at Bob Green Field. The Frontier Conference clash will be the last home game of the regular season for Montana Tech.

“Senior Day is one of the most special days of the year,” Samson said. “We wouldn’t be where we are today without those 14 guys. They’ve been with me here from the start and have helped me and the staff in addition to helping the other players.”

Samson is in his third year as head coach of the Orediggers after a stint as offensive coordinator. It is only his second season in terms of game schedule as the 2020 slate was erased by the Covid-19 cautions in place then.

Montana Tech goes into the game with a 6-2 record, both overall and in conference play, and the Bulldogs are 5-4 for the season, including a 4-4 Frontier ledger. The conference championship and a national playoffs berth are definitely in play as possibilities for Montana Tech.

The game will be the second meeting of the teams this season with Montana Tech having blanked the Bulldogs 41-0 in Dillon on September 24. Samson said the score has no reflection on what is expected this time around.

“Last week’s win was a good one for us,” Samson said. “Now, we have another big game this week. We’ve been in playoffs mode since the bye week.”

“Last time against Western, we executed really well. The guys made plays and we just executed. But, we know Western is a really good football team. They will be a challenge and they will give everything they’ve got.”

As a close-by rival, the Bulldogs can be expected to be chomping at the chance to derail Montana Tech’s playoffs considerations.

“There’s a playoff bid on the line,” Samson said. “These are two good teams playing in November (in a meaningful game). I’ve been proud of our guys, the way they’ve played, the last two weeks. Now, we have to go out on Saturday and do the job against a very good team.”

“They had a great win against C of I. We know what they can do. They’re well-coached, they’re very physical and they have a lot of guys who have played a lot of football in this conference. (Jon) Jund is a fourth-year starter (at quarterback) and he has seen everything in this league. He is a great player and I have a ton of respect for him.”

Jund is second in the league in passing, averaging 215.6 yards a game, and has thrown a Frontier-best 16 touchdowns. He has also run for eight touchdowns. Reese Neville leads the ground game with 80.9 yards a game on average, fourth in the conference. Freshman Dylan Shipley leads the receivers with 22 catches for 376 yards, including six touchdowns.

The Montana Western defense is led by linebacker Kameron Rauser with 6.6 tackles a game on average. He has two sacks and also intercepted a pass. Lineman James Aragon has five sacks, second in the conference. Tanner Harrell is fifth with 4.5.

“They have some weapons,” Samson said. “They have a solid offensive line and two very good running backs with some good receivers. Jon Jund is their engine and he will make some plays. We have to contain him.”

“Our defense will be ready to go.”

Hoffman is Montana Tech’s career leader in receiving yards, 2,829, and receiving touchdowns, 24, according to statistics provided by Nick Bowsher of Montana Tech sports information. Both records were previously held by Dion Williams.

Montana Tech’s defense leads the league in turnover margin with 21 takeaways while committing just nine turnovers. The Orediggers have recovered a league-high 12 fumbles and the Montana Tech quarterbacks have thrown only four interceptions.

Running back Blake Counts, who rushed for 126 yards in the previous game against Montana Western, averages 97.9 yards a game to lead the league.

Blake Thelen had his first start of the season in the earlier win over Montana Western and passed for three touchdowns. He and Campbell have shared the duty the past couple of weeks and Samson said the plan remains the same this week with running back Kaleb Winterburn in the mix as the wildcat QB.

The Oredigger offensive line has allowed only six sacks this year in addition to helping Counts in the successful run game.

Samson said the Montana Tech injury situation remains the same with some players back from injury and some healing. He said it seems the injuries have been more of a problem this year than would be usual, but the team has survived them well.

A large crowd, even on a day of predicted cold, is expected for the game.

“Our guys are excited to play in front of a tremendous crowd,” Samson said. “They’re ready to get after it.”

“Our offense leads the league in points per game and I’m proud of that. Our defense has been tremendous the last couple of weeks, especially in creating turnovers and getting to the opponents’ quarterbacks. Our special teams have been tremendous all year. Our kicker (Ryan Lowry) and punter (Andrew Almos) have been special, and we have great returnmen (Kyle Torgerson and Jaden MacNeil).”

The progress of the team has probably been the important part of the success, the coach said.

“The (Orediggers) are getting better every week and have really stepped it up the last couple of weeks,” he said. “Coach (Aric) Williams has done a tremendous job with his guys on defense.”