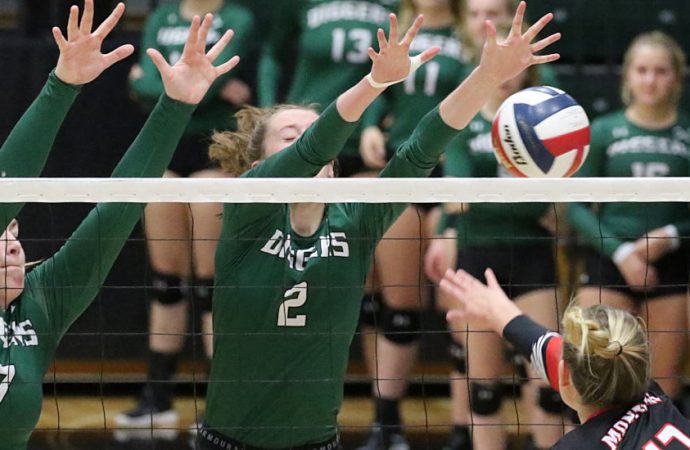 The Orediggers backed their No. 18 ranking in NAIA with as strong and balanced an offensive showing as head coach Brian Solomon could probably have hoped to have seen.

“Our physicality was pretty on point with our hitting,” Solomon said. “Offensively, we’ve been tweaking some small adjustments. Our offense was really strong tonight.”
Montana Tech is a shiny .448 as a team while registering 48 kills in just a three-set match. Freshman outside hitter Maureen “Mo” Jessop pounded 16 of them while senior middle hitter Heather Thompson and junior outside hitter Gena McMillan both nailed nine. Sophomore middle hitter Sydney Parks pummeled eight. 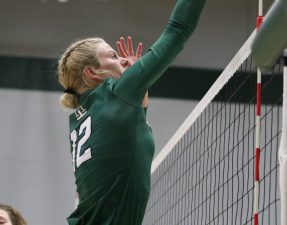 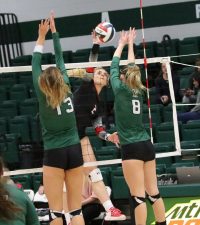 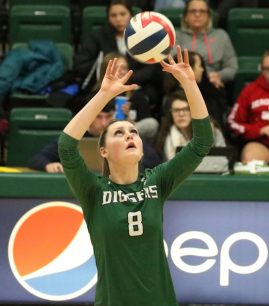 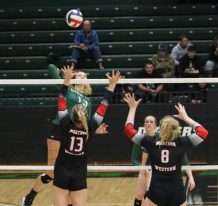 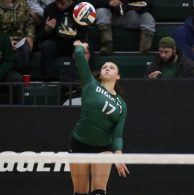 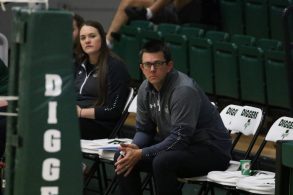 Montana Western was held to 30 kills and committed almost twice as many hitting errors with 16 as the Orediggers.

“I thought McKenna (Kaelber) ran our offense really well,” Solomon said. “All of our hitters were really accurate and our middles found their opportunities. Mo coming out hot in the first set really helped.”

Kaelber said she was only a cog in the offensive machinery and benefited from her teammates’ good defensive showing, as well.

“We worked on setting to both (hitters on the ends of the net) more in practice this week,” the 5-foot-11 freshman setter said. “I was glad to get the opportunity to try it out. It helps when you get good passes. It’s easy to distribute the ball when you have those options. What they do make me look good.”

The offense would not have been able to execute so well, though, Kaelber said, if not for the way the defense kept coming up with the ball on the side-outs and in guarding the net.

“That strong block helps me, too,” she said, after spreading the ball around to hitters for 41 assists. “The block is a good part of playing at this level. If you can’t form the defense around it, it’s critical.”

Montana Western’s sustainability on the court seemed to be in critical need much of the night against a Montana Tech team that portrayed more power and chemistry. Jessop scored the first two points of the night with kills as the Orediggers bolted to a 5-0 lead. Karina Mickelson and Parks both had kills in the early surge, too, and the Bulldogs hurt themselves with mistakes. Jessop smoked six kills in the first set.

The Montana Tech’s lead stretched to 10 points, 15-5, on a kill by Thompson and set point came at 24-14 on a block by Thompson, the 5-11 senior. McMillan mashed a kill for the next point, which ended the set.

The Bulldogs regrouped for the second game and blasted out to a good start. They led 4-0 after two Emmah Peterson kills and held an edge until being caught at 11-all. McMillan had launched what would become a seven-point serving run with the Orediggers trailing 11-9. Mickelson killed two shots to tie the score and then a McMillan ace gave Montana Tech the lead. The Orediggers kept it.

They closed the set by scoring the last five points in it, stretching a 20-15 advantage to the final 25-15 set score as Kaelber dumped a setter’s tip for a point, McMillan and Thompson thumped kills, Thompson fenced up a block and McMillan clobbered a kill.

Montana Tech controlled the third game from almost the start. It grew the lead to 10 points, 20-10, on a bump by McMillan that cleared the net and fell in for a point. Montana Western continued to lurk, however, and a by 6-0 freshman Abby Morgan cut the Bulldogs’ deficit to 21-15. The Orediggers, though, finished.

Thompson blocked for a sideout and Kaelber took over the serve. She fired two aces for match point and the match ender.

“It feels great to play great,” Solomon said. “We have four games left to play (in the regular season) and have fun.”

The win put Montana Tech at 6-3 in the Frontier Conference and 21-6 overall. Kaelber and McMillan served three aces apiece for the Orediggers, and libero Sabrina Hopcroft led in digs with 10. Thompson and Kaelber each had three blocks.

Montana Western fell to 1-8 in the Frontier and to 8-15 for the season. Bulldog leaders were Abbee Croninger and Morgan with five kills apiece, Madison Richtmyer with eight digs, and Croninger, Peterson and Kaitlyn White with two blocks each.

Montana Tech will be home on Saturday against 16th-ranked Rocky Mountain in a Frontier Conference showdown.