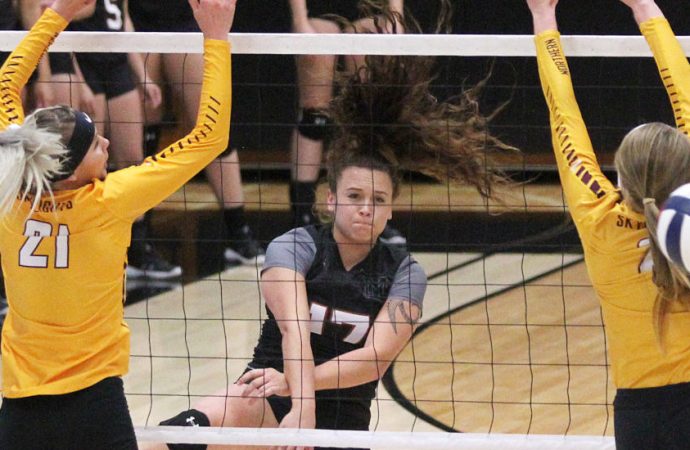 Montana Tech has found its volleyball stride and on Saturday might have found its motto, too.

“Our hitting was great and we do hit the ball hard,” he acknowledged. ‘It was a good night.”

The win was also Montana Tech’s first game on the Montana Tech HPER Complex court. However, it was Orediggers’ 16th match this season and their 14th win.

Montana State-Northern was simply unable to hit with the home team. The Skylights tried, but was unable to unleash anywhere near equal firepower.

The Orediggers collected 42 kills, twice as many as the Skylights, and hit a red-hot .344 for the match. Northern was held to .022 hitting.

“Gena led us in kills and we did hit well,” Solomon said. “Sabrina (Hopcroft) defended for us really well. It was a good first week of conference for us.”

Hopcroft, the fourth-year starting libero for Montana Tech, came up with 19 digs over the three sets.

Montana State-Northern stuck close in the first game and used some serving troubles by Montana Tech to stay well within range. The Skylights never led, but were within a point often. The teams were tied at 15-all after a stuff by Northern’s Hailey Warren. The Orediggers, though, went ahead as Thompson pounded a kill and they stayed in front. Sydney Parks notched set point on a tip at 24-18. The Skylights fought off two more tries and then Parks flattened a kill for the set win.

Montana Tech cruised in the second set. Karina Mickelson served the Orediggers out to a 13-3 command from a 7-3 edge. She hit three aces in the run and Jessop powered a pair of kills.  Montana Tech maintained the distance and hit set point at 24-9 when a hit by Northern’s Rylee Burmester traveled long. McMillan aced the next serve for the Orediggers and they had a two-game lead.

Montana Tech had to hold off attempts from MSU-Northern to rally in the third game. The Orediggers built a 15-6 command as Parks and McMillan led the hitting attack. It stretched to 18-8 after two Kiya Loobey kills and a Skylight hitting error. However, Northern chipped away at the deficit and scratched to within 19-15 on a Burmester ace. The Orediggers preserved what was left of their lead and finished with three straight points, two McMillan kills bringing match point at 24-16 before a hit by the Skylights failed to land inside the end line.

“In conference games, everyone plays hard,” Solomon said. “We’re working on a lot of things, right now. The middles really came through for us tonight.”

Parks and Thompson were fairly dominant in the middle with Parks posting four blocks to share the team lead with McMillan. Mickelson led the serving game with four aces.

The loss put Northern at 6-8 for the year. Montana Tech, 2-0 in conference and 14-2 for the season, will play at Montana Western on Thursday in Dillon in its next match.