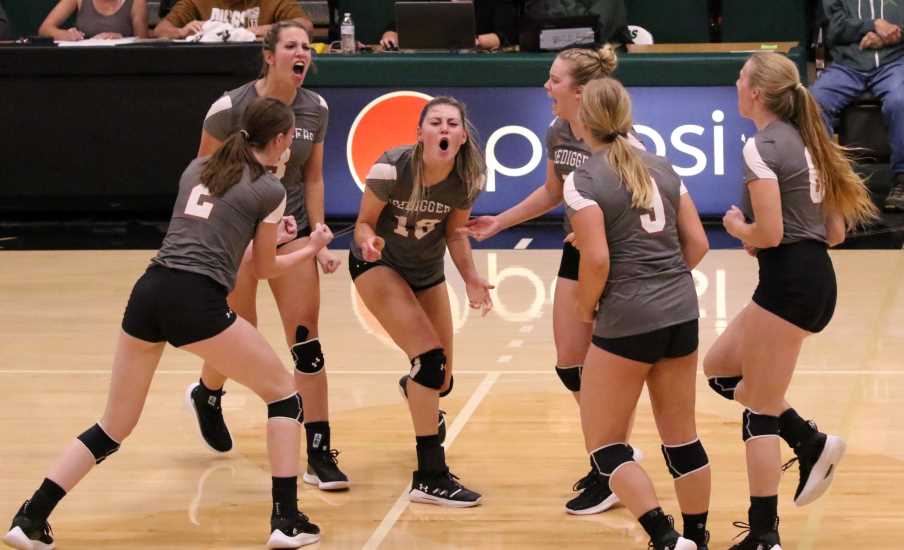 Instincts over adjustments can sometimes be the key to knowing yourself on the playing floor.

Montana Tech’s Alexis Umland looked at it that way while explaining her starring role Wednesday night in a 27-25, 25-14. 25-16 sweep over Frontier Conference college rival Montana Western in the Montana Tech HPER Complex.

Some injuries to the playing personnel caused Montana Tech head coach Brian Solomon to adjust lineups and tinker with changing positions. Umland and the Orediggers benefited.

“I kind of switched positions and have been moving around,” the 5-foot-10 sophomore out of Missoula Sentinel said. “That was fun. I went back to (what’s familiar) tonight. I’ve always been a middle blocker.”

She’d been playing right-side hitter much of this season due to Montana Tech having a wealth of depth in the middle. So, sliding over to the inside put her in more familiar territory.

“One of the other middle hitters got hurt,” Umland continued. “That’s what I’d always played and it was fun, tonight. I had a week of practice (back at middle hitter) and here we are.”

The winner’s side of the score is where the Orediggers, ranked 19th in the recent NAIA national poll, are.

“We had a lot of great performances,” Solomon said. “Alex had a really big match at middle and while starting. She had a lot of points blocking, and on offense. It was really exciting to see her do that.”

Umland said she even began this season as a middle hitter, but was moved to the right side not quite a month ago. Still, the muscle memory had to be reawakened for the switch back.

“It took me a few days and few plays to refocus,” she said. “Our defense was amazing tonight and made things easier. Our setting was great, too. Everything was just clicking.”

It wasn’t at first. Montana Western took Montana Tech to extra serves in the first set, before the Orediggers out-scrapped the Bulldogs. No lead of four points or more was ever built in the set and Montana Western led 25-24 after a block by Peyton Vogl. Standout hitter Maureen Jessop responded for Montana Tech with a kill to tie the score and sent the set to extras. A shot by the Bulldogs’ Jordan Olson tangled in the net, letting the Orediggers gain a 26-25 edge. Then Umland ended it with a block teamed up with McKenna Kaelber on the fence line.

Montana Tech got away in the second and third sets.

Umland said familiarity with the opponents played a part.

“We’ve played each other a lot and I went to high school with their libero (Katie Casagrande),” Umland said, adding that several players on both teams played with and against each other in high school. “It is fun to play Western, and they’re always good matches. They had big, good players at the net tonight.”

The Orediggers jumped out early in the second set, then had to fend off the Bulldogs. Montana Western had a 10-9 edge when setter Kaylee Fritz dumped a fake set over the net. Montana Tech took the lead for good at 12-11 on a kill by Taylor Henley. Logan Reed served four straight points as the Orediggers widened the lead, thanks to two Umland kills and a Reed ace. Olivia Cady grabbed serve for Montana Tech with a 21-14 command and served out the set, the Orediggers scoffing on two Cady aces around a Henley kill, then the Bulldogs hitting wide on two returns.

The Orediggers played without use of a libero, going with a more traditional approach. Cady, Sarah Hopcroft and Jalena Jablanov, all of whom have played libero for Montana Tech, still saw plenty of back-row time gearing the Oredigger floor defense.

Montana Tech owned an 11-4 lead in the third set after significant serving runs by Hopcroft and Jessop. The Orediggers maintained the lead, exchanging points and side-outs, with Montana Western to 23-16. Jessop killed the 23rd point, then nailed the 24th for match point. Her next blast was fumbled by three Bulldogs and fell to the floor, ending the match.

“Mo (Jessop) had 15 kills,” Solomon noted, also pointing to Kaelber’s 34 assists in three sets. “Our passing and setting was better tonight, we had a better rhythm.”

Kinnidi Willmore and Olivia Muir spiked seven kills each for Montana Tech, which is now 16-6 for the season, including a 4-0 conference record. Cady fired three ace serves and Reed belted two. Emma Carvo led in digs with 14 while Hopcroft and Cady each came up with 13 and Jessop notched 12.

Montana Western, 9-11 and 1-3, was led by Jazi Smith with eight kills, Fritz with 25 assists, Kelsey Goddard with 19 digs and Danyel Martin with three blocks.

Montana Tech will play at Montana State-Northern in Havre on Saturday and the Bulldogs will play at Rocky Mountain on Friday in Billings.