Diggers head to Caldwell for rematch with Coyotes 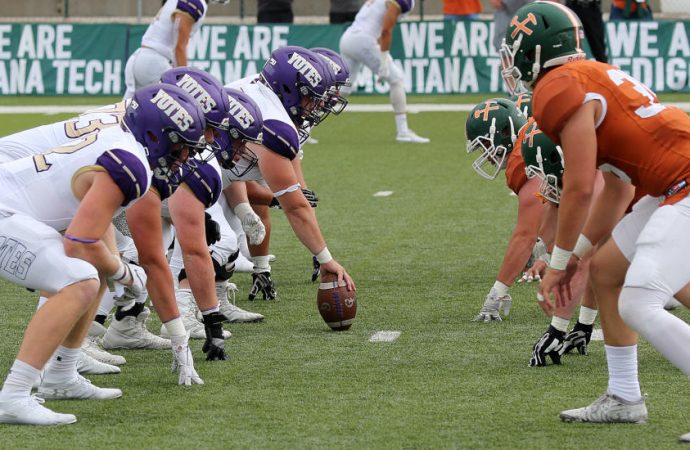 The College of Idaho offensive lien and the Montana Tech defense line up for a snap Sept. 7 in Butte. (Bill Foley photo)

Montana Tech’s football team will be walking into a hostile environment Saturday when they take the field at what is expected to be a rainy Simplot Stadium in Caldwell, Idaho.

The 5-0 Coyotes have won 11 straight games dating back to last season, and the school is expecting more than 4,000 fans as the Orediggers head to town for just the third College of Idaho home game of the season.

Simplot was loud and ruckus when the College of Idaho was in the basement of the Frontier. Now that the Coyotes are sitting atop the standings — and near the top of the NAIA — the place should be beyond electric.

All that is just fine with the 4-1 Orediggers, who haven’t lost since the 28-14 season-opening defeat to the College of Idaho in Butte.

Oredigger coach Chuck Morrell said his team is built for this exact situation.

“The vibe down there will be cool,” Morrell said. “It always is. It will be fun down there. Our guys are definitely excited. We’ve had the opportunity to play in a lot of big games already this season. This is going to be no different for us.”

Morrell said the Orediggers can handle the atmosphere by doing what they have done week in and week out.

“We’ve just got to take care of ourselves and focus on ourselves,” Morrell said. “We always challenge our guys to do that each and every week, just cut out the noise, focus on your job and do it to the best of your ability.”

“I really do feel like our kids thrive in that atmosphere. They embrace it, and they enjoy it.”

Coming off Saturday night’s 35-12 win over Montana Western, the Orediggers need a win Saturday to keep their Frontier Conference title hopes alive. A loss would essentially put the Orediggers three games behind the Coyotes because of the tiebreaker.

Led by senor quarterback Darius-James Peterson, the Coyotes enter the game with the top offense in the league. With 295.6 yards per game, COI is ranked No. 3 in the NAIA in rushing.

That starts up front with an offensive line led by three seniors. That inlcudes Josh Brown, a 6-foot-7, 305-pound left tackle who is responsible for the NFL scouts at each COI game.

“Their offensive line is very good,” Morrell said. “Their left tackle is the best offensive lineman in the league, heads and shoulders about everybody else. There are very few offensive linemen in our league who look even remotely like him.”

Junior running back Nick Calzaretta is averaging 139.8 yards per game, while Peterson is a threat with his feet and arm. He has 287 yards rushing through five games. He’s passed for 1,003 yards, nine touchdowns and just two picks.

Sophomore Hunter Jarez is the top target for Peterson. He has 16 receptions for 390 yards and three scores.

Last week, Peterson earned the Frontier Conference Offensive Player of the Week honors by throwing for 356 yards and four touchdowns in a 47-14 win at Carroll College. Calzaretta ran for 101 yards and a score.

The Oredigger defense is coming off its best performance in a few years. The Tech offense is responsible for nine of the 12 points surrendered — a safety and a pick-6. Special teams is responsible for the other three with a fumble recovered by Western deep in Oredigger territory.

Senior linebacker Carter Myers earned Frontier Defensive Player of the Week honors for his performance in the win. With fellow fifth-year seniors Jacob Clarke and Ike Schweikert controlling the middle, the Oredigger defense was humming on all three levels.

Offensively, sophomore quarterback Jet Campbell is coming into his own. He passed for a touchdown and ran for another.

How he responded to the pick-6 against Western might be the highlight of the season for the Orediggers.

On the next drive, the Orediggers went eight plays for 75 yards and a score. Campbell capped the scoring march with a 43-yard touchdown pass to Trevor Hoffman.

“Our guys were calm, cool and collected and came out and scored the very next series,” Morrell said. “I think that was a turning point for us maybe in the season.”

Morrell added that coaching smart, hard-working players at Montana Tech lends to teams being able to handle adversity like that.

“They’re just steady, blue-collar guys that aren’t going to ride the emotional train,” he said. “They’re just going to step up and do their job the next series out. That’s a really good sign for us to deal with adversity and still play dominant football.”

From there, the Oredigger offensive line took over.

Hunter Spartz, Tristan Stauffer, Hayden Smith, Trey Copeland and Grant Benz dominated the second half, paving the way for a one-two punch in the running game with Tyler Folkes and Blake Counts.

After a review of the film, Folkes ran for 198 yards, while Counts picked up 96. With Jed Fike out for the season with an ankle injury, the Orediggers again will turn to the young backs.

If the Orediggers get offensive line play like last time out each week, that duo will continue to rack up yardage.

“It was just an overall dominant performance, especially in the second half, by our offensive front,” Morrell said.

To beat the College of Idaho, the Orediggers are going to have to play close to a perfect game.

“Obviously, they’re having a tremendous season,” Morrell said of the Coyotes. “The thing that really comes off about them is they are playing very disciplined football. They are making very few mistakes right now, really on either side of the ball.”

The Orediggers will be back at home next week to Take on Eastern Oregon.