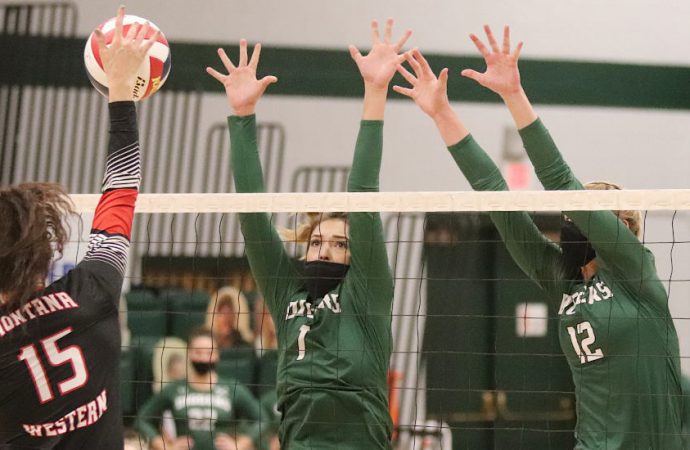 “We just like to keep it exciting,” Tech sophomore Maureen Jessop said with a laugh after Tech completed the weekend sweep of the Bulldogs. The Orediggers overcame a 1-0 deficit for a four-set victory Friday night.

Jessop, one of three Orediggers in double figures in kills on the day, said being pushed to the limit early in the season is not such a bad thing.

“It always points out your weaknesses so you can work on it in practice,” the Corvallis native said. “That’s always the benefit of games like this. You really get to look at yourself and see what needs to be improved.”

Tech’s Maureen Jessop goes up for a block as Western’s Abby Morgan winds up to hit. (Bill Foley photo)

After a tough win in the opener, the Orediggers (4-4) looked primed to make quick work out of the Bulldogs (1-7). Western had a different idea, controlling the next two sets from start to finish.

Jessop said the Bulldogs didn’t do anything different. They just played great.

“They kept it pretty much the same,” she said. “They just served aggressive and kept hitting at us.”

The tiebreaker went back and forth before Tech outscored Western 10-1 to break open a 4-all set. Oredigger Sydney Parks put the game away with a spike off a pass from Kamaile Moody.

Henle also led Tech’s blocking game with five and a half blocks. Jessop blocked three and a half.

With McKenna Kaelber out after suffering an injury on Friday, Moody took over full setter duties and ran the Oredigger attack with 48 assist. She also collected 10 digs. Libero Hannah Oggerino led the back court with 34 digs, and Kiya Loobey spiked nine kills.

The Bulldogs will play host to the University of Providence. The Orediggers will go back to work getting read for a trip to Carroll College.