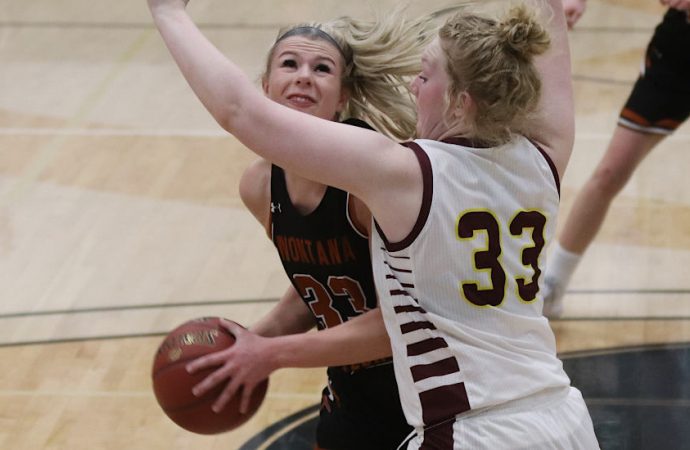 The win seemed likely early, but it wasn’t until a block by Brooke Heggie followed by a 3-point basket by Mollie Peoples with about 3 ½ minutes left that Montana Tech ruled.

The Orediggers hope to reign over more after Sunday afternoon’s 62-55 victory against Montana State-Northern. The win in Montana Tech’s HPER Complex closed the Frontier Conference regular season for both college women’s basketball team, yet another rematch looms. (Stats)

Carly Sanon, head coach of the Orediggers, confirmed after the game that the teams will meet a third straight time on Thursday when they meet in Havre in the first round of the conference playoffs. The squads split in the regular season with two wins apiece.

Montana Tech had lost eight straight games coming into the Sunday matchup, so Sanon and crew couldn’t have been blamed for feeling not so confident even with a 16-point lead in the first half.

Consecutive 3-pointers by Aubrie Rademacher opened it up for the Orediggers to 25-9 with 9 minutes, 3 seconds left in the second quarter.

“We got up by 16 points in the second quarter,” Sanon said, “and I still had to tell the girls that they never make it easy on me.”

Some of Montana Tech’s losses this season came after leads evaporated late into deficits.

Montana State-Northern, coached by former Butte High coach Chris Mouat, refused to go away gently and so trailed by 34-27 at halftime and got as close as four points, 38-34, to the Orediggers in the third period.

Baskets by Tiara Gilham and L’Tia Lawrence had cut the Montana Tech advantage to two baskets. Oredigger point guard Madison Allen, however, buried a 3-pointer to blunt the Skylights’ comeback. Mesa Williams drove for a basket to grow the difference back to nine point. Northern’s next response was a free throw by Cameron Mooney and Allen capped the third quarter with another 3-point.

Montana Tech’s lead was 46-35 going into the last period.

The Skylights charged right after the Orediggers.

“Madison Allen hit a big 3-pointer and Mollie Peoples hit a big 3-pointer,” Sanon said about the Orediggers being able to survive the last half. “And, Mesa Williams kept attacking the hoop. And, went out on Senior Night with a 20-point game.”

Gilham ran off six straight points as MSU-Northern narrowed the gap to 46-41 with 8:11 on the clock.

The Oredigger defense stopped the momentum and Williams took the ball to the hoop two times in a row, once on a sweet spin move to her left and then on a strong drive that also drew a foul and made for a three-point play. The lead was at 10 points.

The Skylights were stubborn Peyton Kehr hooped a 3-pointer and then Gilham made one of two foul shots for a 55-49 difference owned by the Orediggers.

MSU-Northern had a chance to pull even closer after the Orediggers missed two charity tosses on their end and the Skylights gained the rebound. The two clutch plays for Montana Tech followed.

Heggie batted away Gilham’s try from the paint and Peoples connected for a 3-pointer. The Montana Tech lead was nine points, 58-49.

The Skylights were unable to make up the difference in the last 3:22. Sydney Hovde made two freebies, and Gilham knocked down two shots from the key, but Montana Tech gave them no more. Williams netted a free throw for the last point of the game.

Sanon said another key to the win was the Orediggers fencing the Skylights off the offensive boards in the second half and not giving up the “second-chance baskets.”

“I’d like to thank our two seniors, Mesa and Hailey,” Sanon said. “I believe they bleed copper and green. They gave us a lot in the last four years. This was a tough year for them playing their senior year without having friends and family in the stands (due to the coronavirus precautions). One of sets of parents had never missed a game and the other’s was almost always there.

“So, I thank them for what they gave, not to just the basketball program, but also to the campus and community.”

The Orediggers battled through a regular season complicated by a rash of injuries, as well as pandemic quarantining. The team just came out of its latest quarantine this week and some players remained idled because of trace contacting.

“We had two practices before this game,” Sanon said. “We played some games this year missing three starters. The bench got better with the (necessitated) experience and, down the road, should be of even more help.”

Montana Tech finished the regular season with a 5-13 record. Allen finished with 13 points to back Williams in the scoring totals. Rademacher posted 10 points. Heggie pulled down seven rebounds to lead the team. She also had three blocks.

Gilham led Northern with 15 points, and Peyton Kehr was second with nine. The Skylights ended their regular season at 6-13.