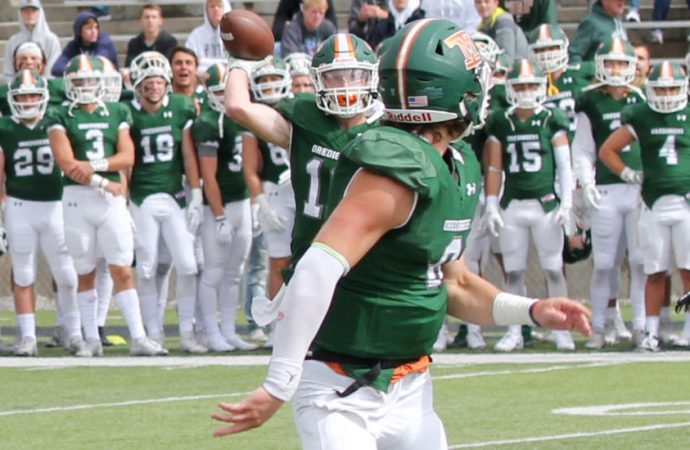 The play wasn’t exactly original, but the execution was flawless.

The call also proved to be killer for Southern Oregon.

Montana Tech dialed up a play they call “Digger Special,” and it turned out to be the difference in a 17-14 Frontier Conference Hall of Fame Game win over Southern Oregon today at Alumni Coliseum. (Stats)

Facing third down and six from the Southern Oregon 7-yard line, the Orediggers stole a play from the Philadelphia Eagles in Super Bowl LII.

Oredigger quarterback Jet Campbell handed off to running back Blake Counts, who swept left before pitching to receiver Kiley Caprara. Caprara, moving back to the right side of the field, then dumped a pass to Campbell, who went in untouched for a 7-yard touchdown.

The play put the Orediggers up 17-7 just 27 seconds before halftime.

The touchdown pass was the first for Caprara since he played quarterback in the seventh grade.

“I was a little scared, but I got it too him. That’s all that matters,” Caprara said of the pass that was far from a spiral. “We’ve worked on it since Week 1. It was our 2-point play, actually. We said, ‘Screw it, let’s do it for a touchdown at the end of the half.’”

In the Super Bowl, the Eagles used the same trick play and tight end Trey Burton threw a touchdown pass to Nick Foles to give the Eagles a boost just before halftime.

Likewise, the Orediggers headed to the locker room on a high after the late score.

“It was absolutely huge,” Oredigger coach Chuck Morrell said. “It’s a play that we’ve been working on for quite a while, and, as a defensive guy, I’m just glad to see it work on somebody else besides us in practice.”

“It was a gutsy call,” Morrell said. “It was the right time and the right situation to call that play.” 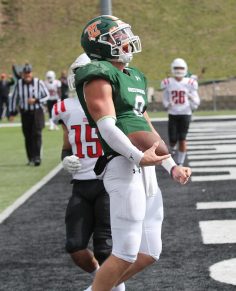 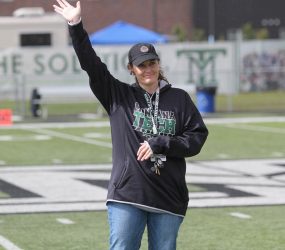 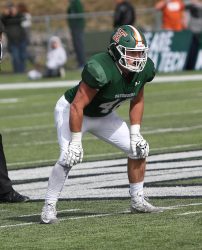 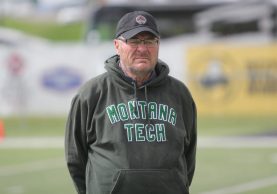 Tech Hall of Famer Dan Mahoney listens as his accomplishments for the Orediggers are read tot the crowd at halftime. (Bill Foley photo)

Members of Tech’s three Hall of Fame basketball teams made their way back for the game. (Bill Foley photo) 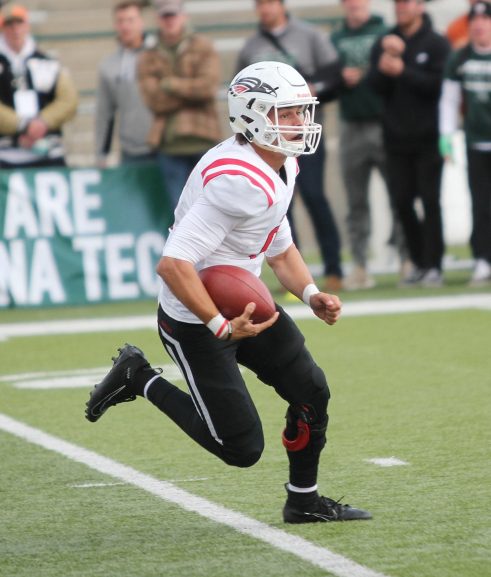 The momentum did not lead to a big second half for the Orediggers. The 17 points though, stood up thanks to a solid defensive effort against a team know for lighting up scoreboards.

Southern Oregon pulled to within a field goal when the elusive Wyatt Hutchinson scrambled and threw across his body for a 5-yard touchdown pass to Jordan Suel.

That was the end of the scoring.

The Raiders had a final chance to tie the game or take the lead. However, a chop block call send Southern Oregon back 15 yards to its own 40-yard line for a second and 25.

On the next play, Hutchinson stepped up in the pocket before he was sandwiched by Oredigger defenders Ike Schweikert and Jacob Clarke for a 2-yard loss.

The Southern Oregon quarterback stayed on the ground motionless with what was said to be a spine injury. Both sides watched in horror during a long delay before Hutchinson was taken off the field in a stretcher.

Hutchinson was moving his hands and acknowledging the words of his teammates as he left. Word from Southern Oregon was that the quarterback wanted to walk off the field on his own, but he was take off on a stretcher as a precaution.

On the first play after the delay, Oredigger Demaree Morris picked off a pass from backup Chase Knutz and returned it 20 yards to the Southern Oregon 35-yard line.

Three plays later, Tyler Folkes broke a 20-yard run on third and 10 to send the Orediggers into victory formation.

Folkes and true freshman Blake Counts got more work than expected because the Orediggers lost star running back Jed Fike to an apparent leg injury early in the game.

“That kid is a true Oredigger,” Morrell said. “He’s one of the smartest kids on the team. He doesn’t ever complain about anything. He just gives us max effort all the time. For him to get a big run to close out the game was awesome.”

The Orediggers never trailed in the game.

After forcing Southern Oregon three and out on the Raiders’ first possession, the Orediggers marched 79 yards on eight plays.

On third and five, Campbell scrambled for a 10-yard touchdown run.

Southern quickly tied the game at 7 when Hutchinson hit Addison Whitham over the middle for a 20-yard touchdown with 6 minutes, 54 seconds left in the first quarter.

While Frontier Conference football fans braced for a shootout between the rivals, the defense took over.

Two possessions later, the Orediggers went to their bag of tricks.

Southern Oregon linebacker Kenney Hanley bumped into Caprara after he released the ball. Campbell caught the ball and strolled the final four yards for the score.

“I didn’t even watch him score,” Caprara said. “I just ran away.”

Beside tossing what turned out to be the game-winning touchdown, Caprara also caught seven passes for 75 yards to help Tech register 24 first downs.

In addition to catching the TD pass, Campbell completed 19 for 31 passes for 246 yards.

“He threw some great balls for us today,” Morrell said. “Trevor Hoffman came up big again for us again, Nate Sander in the passing game. It was great to see all those guys really step up and pick up the slack.”

Clarke got in on seven tackles to go along with a sack and a half to lead the Oredigger defense. Carter Myers, who got in on six tackles, and Logan Kolodejchuk also registered sacks for a defense that saw pas break ups by Naoki Harmer, Matthew Drake, Jesse Sims, Jake Orvis and Kolodejchuk.

Harmer and Justin May also made five tackles apiece.

“Our defense held out,” Caprara said. “We held the ball as long as we could.”

“We knew it was going to come down to the end of the game, and it was great to see our guys to be able to finish it off,” Morrell said.

The Orediggers head Havre next Saturday to take on MSU-Northern. 1 comment