Maybe, that “excessive celebration” rule needs to be relaxed.

When a defensive lineman catches a touchdown pass from a backup running back, “excessive celebration” would seem to be obligatory.

Zach Trumble’s TD catch on a 31-yard pass play from Kaleb Winterburn was the highlight play Saturday in Montana Tech’s 26-10 Frontier Conference over Carroll in a packed Bob Green Field and neighborhood. The announced attendance was 4,872 spectators, though the number looked a couple or few hundred light for this year’s holding of the Orediggers’ annual Copper Game.

“We practice it about once a week,” said a beaming 6-foot-3, 270-pound Trumble after the game. “Then, we put it in our pocket until we want it.”

The time came in the fourth quarter with Montana Tech clinging to a 19-10 lead.

“We’ve run that formation a lot and we thought they might bite,” Trumble said, “because we ran it earlier in the game (without the pass).”

Wearing No. 42, Trumble was eligible to receive the ball out of the tight end spot where he was stationed.

“I down-blocked for one or two seconds and ran up the field,” he said.

The other 21 players on it were packed together at the line of scrimmage, while Winterburn got the ball and flipped the pass over the defense.

“Kaleb put it on the money,” Trumble said about his clear sail into the end zone.

Head coach Kyle Samson was elated with the play and the result, but not with his players drawing the penalty. Trumble understood.

“I got a little over-zealous and will be running for it on Tuesday,” he said. “I won’t do it again.”

The play came on the second play of the fourth quarter and neither team scored again. Defenses were stout all game long in roasting temperatures that stayed in the 90s, rising, perhaps, into triple digits on the baking artificial turf.

“It was something we’ve been practicing for fourth-and-short,” Samson said about the trick play. “Everybody executed with the line blocking, (center) Max (Aderson) snapping the ball and Kaleb getting the ball to Zach.”

The win followed a season-opening 38-3 Oredigger victory at Eastern Oregon last week to go to 2-0 for the season. The defense was strong in both tilts.

“I’m so proud of our coaches and team and Butte, America., today,” Samson said. “We dominated in a big rivalry game in front of our home crowd.

“I have to give a huge shoutout to coach (Aric) Williams and his staff. Carroll has a great offensive team and we shut them down.”

Williams is the first-year defensive coordinator for Montana Tech and has produced back-to-back defensive gems out of the chute this season.

The teams alternated field goals in the first quarter with Oredigger Ryan Lowry kicking out a 6-3 lead over the Saints’ Stephen Powell.

Montana Tech quarterback Jet Campbell posted the first touchdown of the game with a quarterback sneak, more of a plow, into the end zone at 11:25 of the second quarter. A determined Carroll defensive stand was finally cracked on the Campbell burrow.

The Saints answered with a 3-yard touchdown carry by Matthew Burgess after his team drove downfield on the ensuing possession. The Orediggers remained in front, 13-10.

They made it a 19-10 advantage when Campbell looped a pass over a defender and into the hands of Wyatt Alexander bounding for the back left corner of the end zone 22 seconds before halftime.

The score stood until Trumble’s rumble.

“Also important is that our kids really trust the gameplan. They’re very coachable.”

Samson put together the staff he has been praising this season and it includes Doug Schleeman, Travis Dean, the aforementioned Williams, Khalin Anderson, Danny Thatcher, Jorge Magana and Kody Torgerson.

The Oredigger defense held the Saints to 120 yards in total offense, only 48 passing. Montana Tech, on offense, had 326 yards total with a close split between air and ground. Campbell completed 13 of 24 passes and Blake Counts ran for 78 yards. Montana Tech leading receivers were Kyle Torgerson with five catches for 85 yards, Trevor Hoffman four for 69 and Alexander three for 35. Linebacker Ben Windauer led the Orediggers with nine tackles, including a sack and two others for loss. Jordan Washinngton and Keyshawn James-Newby collected five apiece. Cole Wyant forced a fumble and Grant O’Rourke recovered one. Naoki Harmer broke up three passes.

Carroll QB Jack Prka was limited to nine completions on 15 throws. Burgess ran for 80 yards, and Jaden Harrison led the Saints in receiving with three catches for 25 yards. The Saints’ defense was led by Tucker Joes with eight tackles and Hunter Peck with six.

“The win feels amazing,” Trumble said. “We were confident and ready. The coaching staff prepared us. We knew we were the better team and just needed to execute on our home field.”

The Orediggers have next weekend off, then return on September 17 with a home game against Rocky Mountain at Bob Green Field. Carroll, now 1-1 for the season, will next play at Eastern Oregon, also on September 17. 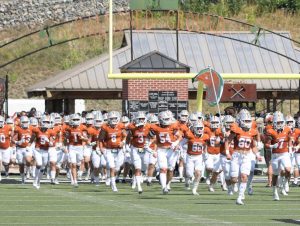 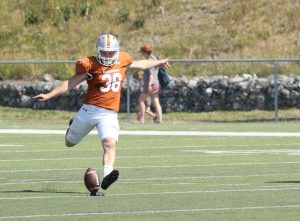 #38 Ryan Lowry on the Kickoff 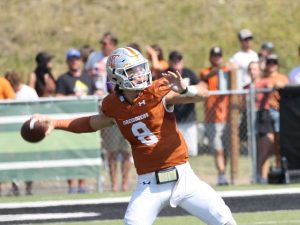 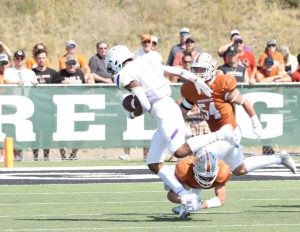 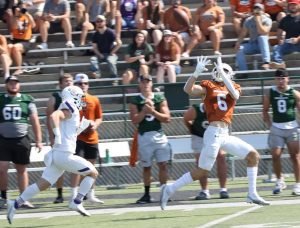 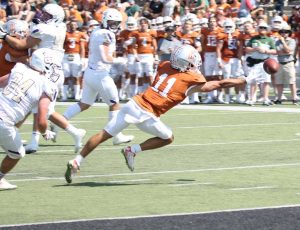 #11 Kyle Torgerson stretches for a catch in the red zone 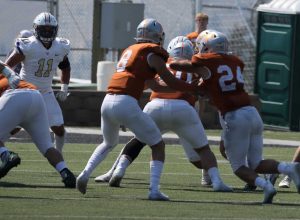 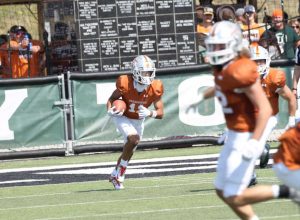