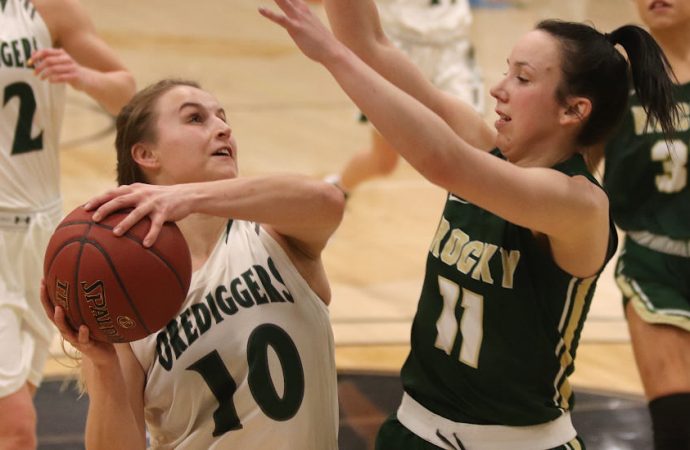 The Orediggers had reason to celebrate Saturday night.

Tech also got a mountain of concern as it gets ready to play the Battlin’ Bears again at 2 p.m. Sunday. Early in the third quarter, sophomore Tavia Rooney left the game with an apparent leg injury.

At the time of the injury, the sophomore from Townsend already registered a double-double with 13 points. All of those came in the first half.

“We need her back as soon as possible,” Tech coach Carly Sanon said.

On Saturday, though, Sanon was focused on the positive. The Orediggers (3-4) never trailed in opening the weekend set with their second straight win.

Dani Urick scored 16 points to pace an Oredigger team that saw contributions from up and down the lineup. Mesa Williams scored 11 points, while Soda Rice and Madison Allen each scored eight points.

“It was good to see Dani still being aggressive,” Sanon said. “Maddie Allen having eight points in that point guard spot for us is huge. Mesa was solid with 11. We did a really good job tonight. We got points from our posts and our guard. We had a mix of scoring.”

The stat the made Sanon happiest was the 42-23 rebounding edge the Orediggers held over the Bears. Rocky managed just two offensive rebounds on the night.

“We’ve been really working hard on boxing out and not giving up offensive boards,” Sanon said. “Tonight, we limited to two ‘O’ boards, which I feel really good about.”

Heggie and Williams each contributed to that effort with six boards. Faletoi grabbed five.

“We played good defense,” Sanon said. “We changed things up and tried to get them out of rhythm. We did a good job doing that.”