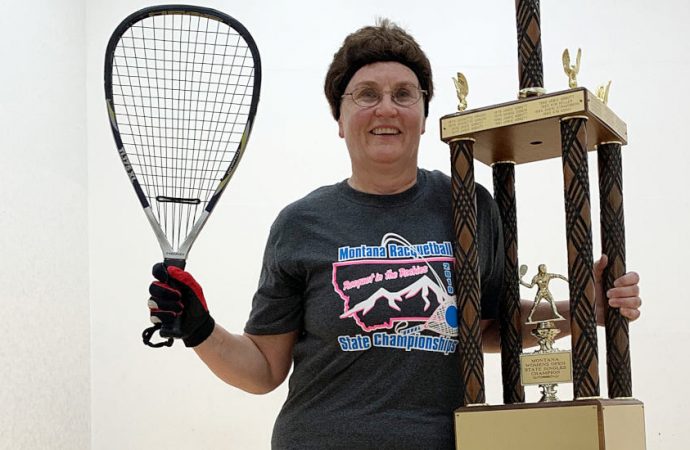 Lori Jurenic has a giant trophy to show off at her home.

The award stands more than 3 feet tall, and she will have it for at least the next 50 weeks. She has had the traveling trophy since she won the first of three straight women’s open titles at the Montana State racquetball tournament in 2017.

As impressive as the big piece of hardware is, however, it is not the favorite award Jurenic possesses.

That distinction belongs to her plaque for the 1988 YMCA Fitness Center racquetball tournament in Butte. That year, Jurenic won the men’s B title.

The championship plaque adorned the wall of the YMCA building, which is now the Fitness Courts, before it closed. Now, Jurenic has it.

“When the Y started to close, I asked ‘What are you doing with the plaques?’” Jurenic explained. “I said, ‘I want that one,’ and I took it off the wall.”

Frank McNabb, Mike Clements and Mark Rule have the distinction of being listed Nos. 2 through 4 on the plaque. Paul Riley, a 2019 selection to the Butte Sports Hall of Fame, won the Men’s A.

The plaque also shows that Jurenic won the women’s doubles title in that tournament along with Diane Johnson, whose son Rob O’Neill went on to become a world famous Navy SEAL. 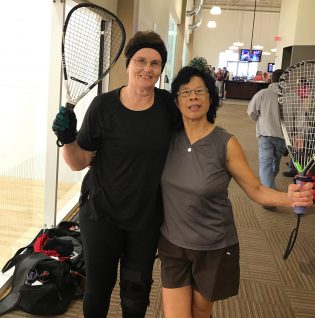 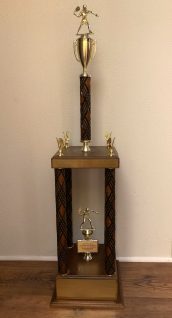 Not long after that momentous victory, Jurenic pretty much gave up the game. Instead, she focused most of her time on being a “sports mom” for her son Anthony Jurenic and daughter Jacque (Jurenic) Andrews.

Both were widely involved in youth sports and had successful careers at Butte High School. Anthony, who is a detective for the Butte Police Department, graduated in 1998. Jacque, who works at St. Patrick’s Hospital in Missoula, graduated in 1999.

Lori (Bruin) Jurenic, won the women’s B state title in 1988 and the women’s A in 1989, and she was poised to be one of the top Montana players for years to come. However, she didn’t really have time for her own sports.

“My kids were very involved in sports, so I was just mostly mom,” she said.

Three decades later and now a grandmother of two, Jurenic, who turns 60 this year, is back on top of her game, and she is showing no signs of slowing down.

A good reason for that is long-time friend Marie Hawkins, who plays with Jurenic pretty much every Monday, Wednesday and Friday at the Fitness Courts.

The first time was after he children graduated from high school.

The next year in Billings, she hoisted the giant trophy for winning the women’s open division. Her name was etched onto the trophy to join other past and present Montana racquetball greats.

She also won her age group title and teamed with Hawkins to win the open doubles title.

Then, the injuries started to come. First, Jurenic blew out her left knee.

“I had to have three surgeries on the knee because the first ACL didn’t take,” she said. That injury came more than a decade after she blew out her right knee playing volleyball.

The next injury was a torn rotator cuff on her right shoulder after she crashed on her mountain bike.

When she tried to return to the court, playing racquetball was just too painful.

Jurenic was also trying to get over the pain of losing her husband, Bernie.

Bernie was disabled after being diagnosed with Ankylosing spondylitis, a chronic inflammatory disease that attacks the spine, in 1997. He died of a heart attack in October 2011. He was 55.

“We were married 33 years,” Jurenic said. “We started dating pretty much when I was a senior in high school. We were from the same neighborhood. We were neighborhood sweethearts.”

Again, Hawkins was there to lure Jurenic back to the court. She liked playing with her friend she has known since 1991. Plus, Hawkins understood better than most just what kind of talent Jurenic possessed.

Hawkins says just scoring one point against Jurenic is reason to celebrate, even if it is just a friendly match on a Monday night.

“She says ‘I don’t give points away,’” Hawkins said. “But I always appreciate when I get a point off her.”

By 2016, Jurenic was back playing. That was the year Hawkins, a Dillon native who now lives in Anaconda, captured the giant trophy. A year later, that trophy belonged to Jurenic.

‘It was actually surreal,” Jurenic said of realizing she had returned to the top after so many years.. “I was like, ‘Holy crap.’ I was proud of myself. I was like, ‘I can still do this.’”

At the latest state tournament, which was played April 5-7 in Missoula, Hawkins took third place in the round-robin women’s open division. Second place went to a woman named Madison Mock, a Colorado native who studies at the University of Montana in Missoula.

At 25, Mock is more than a decade younger than Jurenic’s son and daughter.

In addition to playing against much younger athletes, Jurenic also played in the men’s 55-and-older division at state, wining a match before losing out.

“It was a little different speed on the ball, but it was a lot of fun,” she said.

Jurenic has always played against men, and the list of guys who have taken her on and lost is way too long to mention.

“There was no women to play,” Jurenic explained. “I had to play guys.”

No matter the opponent, Jurenic is playing to win when she enters the court.

Nobody knows that better than Hawkins, who also knows what it is like to win a men’s B tournament. She did that in South Dakota once, when she was eight and a half months pregnant.

“Her strength is determination. She’s so focused,” Hawkins said of Jurenic. “She’s so focused people think she’s mean, but she isn’t. She’s just focused. People ask me ‘Does she ever smile?” I say, ‘Yeah, when she wins.’”

“I have endurance and confidence,” Jurenic said. “I won’t say that I’m conceded. I’m confident. I just have confidence that I can do anything I set my mind to. This is something I learned from Jim Patrick. The way I practice is the way I play. When I’m in the court, I do my best, no matter what.”

Jurenic earned six varsity letters before graduating from Butte High in 1977. She lettered three times in basketball, twice in track and once in tennis.

She held Butte High’s long jump record for many years.

“I can’t even remember how far it was,” she said.

The list of letters won by Jurenic would be longer, but volleyball wasn’t played in Montana high schools until 1984.

“My love was volleyball,” she said.

Jurenic went to Montana Tech on a basketball scholarship and played one season for the Orediggers. She also played on the school’s first volleyball team.

Her college athletic career, however, lasted just one year.

“I fell in love, got married and had kids,” Jurenic explained.

Jurenic stayed active as much as she could. In the late 1980s, she played on a Butte softball team that played at the national tournament in Jacksonville, Florida.

Then, her children’s sports took over.

For the past 10 years, Jurenic has worked at the Southwest Montana Community Federal Credit Union in Butte. She is a loan processor.

Now she has more time to focus on playing racquetball. She has more time to enjoy the game and the new faces it keeps introducing her to. She also has no plans to surrender that giant state championship trophy, even if it isn’t her favorite.

“I’ll play as long as I possibly can,” Jurenic said. “I’ll play until my body goes out.”