Butte Central senior Cutter Thatcher sits between his father Bill “Chunky” Thatcher and mother Leah Francisco after signing to run track with the University of Montana Monday at the Butte Central Rotunda. His siblings, from left, Sofee, Hattie and Tucker are standing behind him.

Cutter Thatcher was following along with a family tradition Monday morning when he signed a Letter of Intent to take his athletic talents to the collegiate level.

He is also being a bit of a trailblazer among Bill “Chunky” Thatcher and Leah Francisco’s seven children.

Surrounded by his family and schoolmates, Thatcher signed to run track at the University of Montana during a short ceremony at the Butte Central Rotunda.

In doing so, Thatcher became the fourth member of his immediate family to sign with a college team.

“First D1 member,” Cutter Thatcher said with a smile. “I point that out to them just to make them jealous.”

Thatcher’s late sister Alex played volleyball at Montana Tech. His sister Hattie had a stellar career on the Montana Tech basketball team, and his sister Kloie is a sophomore starting point guard at Rocky Mountain College.

All six of Cutter Thatcher’s six siblings have excelled in athletics.

His younger sister Sofee is a sophomore who stands out on Butte Central’s basketball and softball teams.

Cutter Thatcher has specialized in track the last several years, and it has paid off.

On Monday he signed with the Grizzlies while sitting between his parents. Sofee, Hattie and Tucker looked over his shoulder. Baylee checked in on FaceTime from Macon, Georgia, and Kloie joined in via FaceTime from Billings.

“I’m pretty excited about it,” Cutter Thatcher said of signing with the NCAA Division I Grizzlies. “I’m there to run the (400 meters) mainly, but I’ll be able to do the other events. I’ll run the (200) and maybe long jump and stuff. I’ll probably end up being a decathlon guy.” 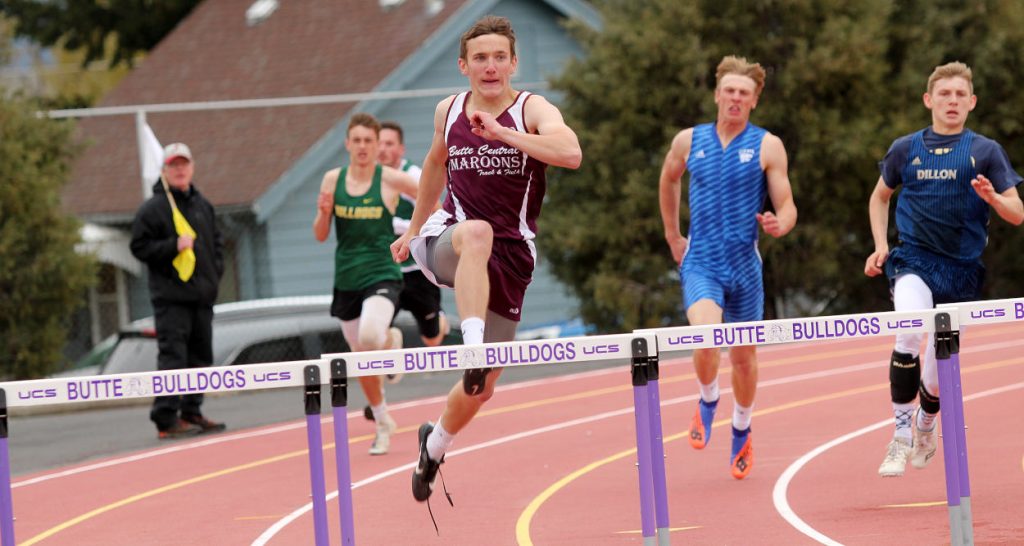 Cutter Thatcher of Butte Central runs in the 300-meter hurdles May 18 at the Charlie Merrifield Track. (Butte Sports file photo)

Thatcher placed in four events for the Maroons at the Class A State meet in Laurel. He finished second in the long jump, fourth in the 300-meter hurdles and fifth in the 400. He also ran a leg of BC’s sixth-place 400-meter relay team with Thomas McGree, Luke Jensen and Clay Fisher.

Longtime Butte Central tack coach Dan McGree, who is now an assistant with the Maroons, said the Grizzlies are getting a steal in Thatcher.

The Grizzlies have not yet announced the addition of Thatcher.

“There’s plenty of events he can run,” BC head coach Zack Stajcar added of Thatcher. “He does everything the coaches ask.”

Thatcher, who also played basketball through his sophomore season, said he has been working out with McGree and former Butte High head coach Charlie Merrifield during the offseason. His workouts include running the hallways at West Elementary School two days a week.

He said he knew he wanted to run track in college since he started hearing from schools during his freshman season.

“That’s the thing. I kind of grew up an MSU fan,” Thatcher said. “When the Griz talked to me, I didn’t hear from MSU at all. It’s cool that they reached out to me because I guess they saw something that the other people didn’t.”

Thatcher also had an offer from the University of Providence, an NAIA school in the Frontier Conference. He said he is considering pharmacy or accounting as possible majors at UM, but nothing is set in stone just yet.

First, Thatcher has about four months left of high school and one more state tournament to worry about before he joins his D-I school.