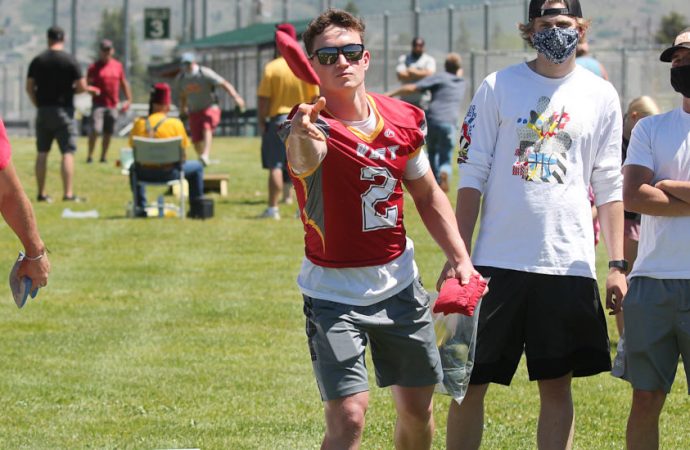 That would be the patents at the Shriner’s Hospital for Children in Spokane, Washington.

The hospital will receive a check in the neighborhood of $50,000 thanks to the tournament put on by the Butte players and cheerleaders selected for the Montana East-West Shrine Game.

The charitable football game was supposed to be played Saturday in Billings. It was canceled in April, however, because of the coronavirus pandemic.

Tommy Mellott, Butte High’s former quarterback who is heading to Montana State to play football for the Bobcats came up with the idea. The other players selected and their families helped put on the tournament.

Before the silent auction was tallied, the tournament had already raised more than $46,000 for the hospital.

Former Butte High quarterback Tommy Mellott tosses a beanbag during Saturday’s Butte Boys for Shriners cornhole tournament at Copper Mountain Park. Mellott organized the tournament to try to make up the money lost by the cancellation of the Shrine Game. (Bill Foley photos)

Butte High football coach Arie Grey
Was someone you know mentioned in this article? Celebrate with an AllStar listing!