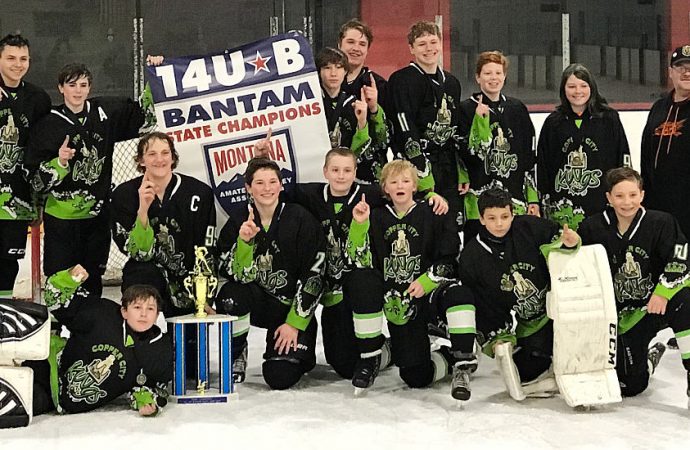 Butte scored five goals and held Glacier scoreless in the first period en route to the title victory. The Kings’ win in the championship avenged a Saturday loss to the Avalanche, 7-2.

“I told them we needed to come out right away and jump on them,” said Butte head coach Jody Hierholzer. “That’s exactly what they did. They worked hard and deserved the win.”

Butte wasted no time getting to work on the trophy as Lance Insko scored the first goal 39 seconds into the contest, sneaking the puck past goalie Kane Morisaki into the upper corner of the net.

After Insko’s game opener, team captain Braden O’Connell scored the next two goals, the first one assisted by Hunter Mapes and the second strike unassisted. Noah Williamson and Hayden Allen tallied the other two goals for Butte in the opening stanza. Allen and Mapes assisted on Williamson’s score, while O’Connell assisted on Allen’s. Three of Butte’s five goals came on power play opportunities off Whitefish penalties.

The Avalanche appeared as if they might come back late, scoring two unanswered goals to start the second and third periods, cutting the Kings’ lead to 5-2 with 11:42 to play. The first goal came early in the second period when Jacob Polumbus knocked one past Trenton Harrison at the 2:39 mark, assisted by Isaac Jensen. Harrison and Butte held Glacier scoreless for the rest of the second until Polumbus struck again, this time 4:18 into the third, assisted by Gauge Schneider and Cameron Shaw.

Butte finished the contest by tightening its defense back up and adding a final score by Mapes, assisted by O’Connell, to make it 6-2 with 1:29 to play. The Kings outshot Glacier 42-20, with Harrison picking up 18 saves. Morisaki tallied 36 saves for the Avalanche.

Havre, Glasgow and Great Falls also competed in Butte for the Class B U-14 bantam title over the weekend.