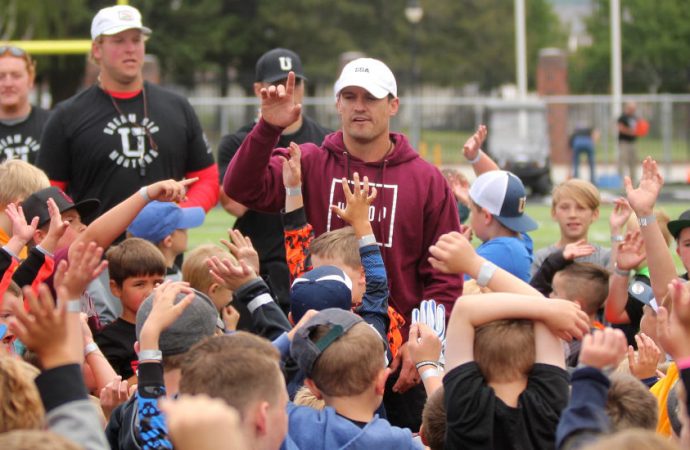 Colt Anderson talks with about 300 boys and girls at a football camp Friday at Naranche Stadium. (Bill Foley photos)

Colt Anderson’s “Dream Big Montana Experience” in Butte came with a message that boys and girls could not help but pick up.

They, too, can do extraordinary things if they work hard.

That is why Anderson brought in NFL players, current and former college football players and an Olympian Friday to work, play and mingle with youth from Southwestern Montana and beyond.

About 300 boys and girls participated in the camp. Even more took part in the family fun day that followed at the Butte Civic Center. 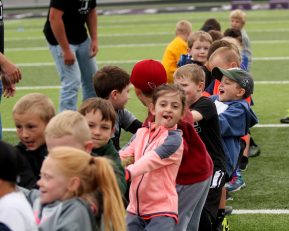 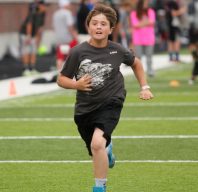 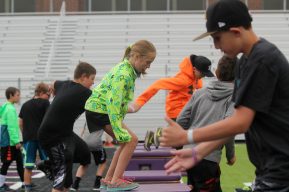 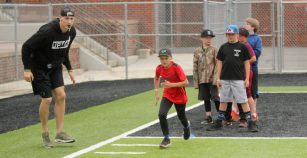 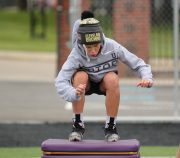 Colt Anderson talks with about 300 boys and girls at a football camp June 29, 2018 at Naranche Stadium. (Butte Sports file photo) 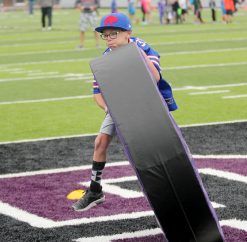 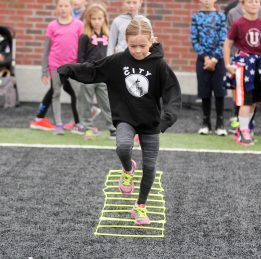 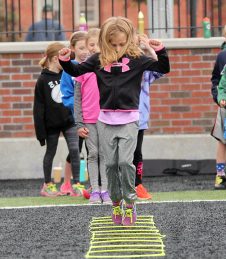 The campers and coaches pose for a group photo before the start of the camp. 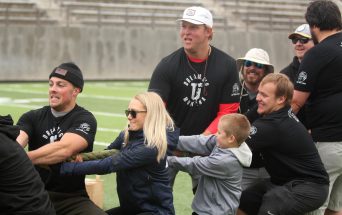 At the family fun day, boys and girls got to rub elbows with the likes of Butte natives Tim Montana and Rob O’Neill. Montana is a well-known country singer who will close the “Dream Big Montana Experience” with a concert tonight at the Original Mine Yard. The concert runs from 7 to 10 p.m.

McDermott, a native of Nashville, made the trip to the Mining City to support Anderson, a teammate on the Buffalo Bills.

“Colt is one of my best friends on the team throughout this past year,” McDermott said. “I spent Thanksgiving and Christmas with him this past season. I just wanted to come up and support him. I love Montana, too.”

Like the boys and girls at the camp, McDermott said he had a ton of fun.

“It was awesome,” he said. “The kids were having a blast at all the different stations.”

A series of tug-of-war contests concluded the camp.

“That was a lot of fun,” McDermott said.

Following the camp, each young athlete was given a piece of fruit, a granola bar and a chocolate milk.

“Who had fun?” Anderson asked to a group of youngsters who raised their hands high. They kept those hands raised as he asked, “Who’s coming back next year?”

Anderson and his wife Keelie started the Colt Anderson Dream Big Foundation. The non-profit Organization is dedicated to creating positive change for children by providing resources, innovative opportunities and experiences that will empower them to find there passion to dream big and succeed.

The event this week included a gala on Thursday night and concluded with a day a lot of boys and girls will remember for a lifetime on Friday.

Anderson is hoping they will leave knowing they are capable of achieving great things.

The foundation, Anderson said, is just getting started.

“Everybody’s got to dream.”

Anderson walked on at the University of Montana after playing for Butte High. He has spent the last nine seasons in the NFL with the Minnesota Vikings, Philadelphia Eagles, Indianapolis Colts and Buffalo Bills.

Currently, Anderson is a free agent.