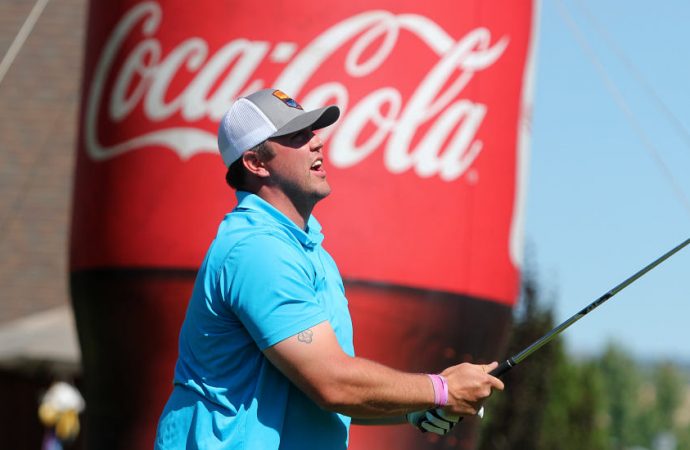 Stephan Burns tees off on hole No. 14 during the Ron Godbout Coca-Cola Classic Aug. 4, 2018 at the Butte Country Club. (Butte Sports file photo)

The Butte Country Club called off the 36th Ron Godbout Coca-Cola Classic Friday morning because of an outbreak of COVID-19 cases.

The tournament had 80 three-person teams signed up to play Saturday and Sunday. The practice round was set for Friday.

Country Club pro Josh Walsh said the club made the decision to pull the plug on the tournament after multiple members tested positive for the virus. He said he was not sure, nor could he say the exact number of cases because of HIPAA laws.

“We had some guys quarantined,” Walsh said. “They got positive tests last night, so we shut it down.”

Walsh said the Country Club has moved back to the protocols of April and May. Only members can play golf, and everything else is closed.

“We have takeout food available if people call in advance,” Walsh said. “We have the pool closed. We have the doors locked. We are members only. People will play golf as they feel like, and I’ll wave at them at the door.”

According to the Montana response website, the state currently has 3,965 cases of the coronavirus. That includes 153 new cases reported today.

According to the map, the state has 1,574 active cases, including 43 in Silver Bow County. That apparently does not yet include the cases from the Country Club.

The Ron Godbout Coca-Cola Classic is named in honor of Ron Godbout, the owner of Mile High Beverages who died at 61 following a battle with cancer in August of 2009.

The tournament, affectionately known as “The Coke,” has a cap of 240 golfers and routinely sells out in a matter of minutes. The event features hole prices, dinner and a Saturday night Calcutta.