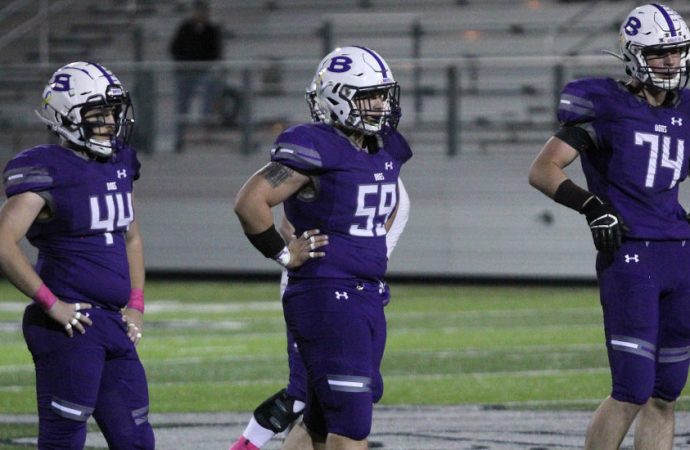 This game has been almost seven years in the making.

For the first time since Butte High beat Bozeman 38-36 in the Class AA State Championship game on Nov. 16, 2012, the Bulldogs will play a playoff football game Friday at Naranche Stadium.

The game will mark the ninth time the Bulldogs and Wolfpack will meet since 2007. Glacier holds a 6-2 advantage. It will be the second time the teams played in the playoffs. The Wolfpack won a 62-55 shootout over the Bulldogs in 2013.

The playoff game will be the second time the Bulldogs and Wolfpack play this season. Butte High went to Kalispell to beat Glacier 55-28 on Sept. 20.

Glacier is 5-5 including a Week 2 loss at Mead, Washington. The Wolfpack is 4-2 since falling to the Bulldogs, and that includes last week’s 33-24 playoff victory at Great Falls High.

J.T. Allen threw a pair of touchdown passes — to Colin Bowden and Luke Pilau — and Jake Rendina ran for a pair of scores to lead the Wolfpack in the playoff game in Great Falls.

Rendiina, a 5-foot-1, 200-pound sophomore ran for 151 yards and a touchdown on 20 carries in the loss to the Bulldogs. Allen threw for three touchdowns and an interception, to Bulldog senior Quinn Sullivan.

Of course, that game was all about the Bulldog offense, which racked up 590 yards.

Senior quarterback Tommy Mellott had a monster night at Legends Stadium. Mellott, who has 95 combined passing and running touchdowns in his four years at Butte High, had a hand in five scores in the win. He passed for 298 yards and four touchdowns. He also ran for 124 yards and a score.

Mellott, who has run for 833 yards and 13 touchdowns, passed for 24 touchdowns to eight different receivers. The future Montana State Bobcat is currently tied with Josh Paffhausen, who led the Bulldogs to an undefeated championship season in 1991, for No. 4 in school history.

Kameron Moreno, a senior who ran for 1,054 yards on 16 touchdowns in nine regular-season games, ran for 92 yards and two touchdowns in the win over Glacier.

The big ground season is a testament to a stout and deep offensive line. Seniors Konnor McClafferty and Lucas Kingston and juniors Ty Raiha, D.J. Jackson and Timothy Hollingsworth have been the starters. Junior Ryalan Ruscheinsky filled in for Raiha last time out.

Seniors Kobe Moreno and Josh Nelson have also found success on the ground. Kobe Moreno, who has played all season with a brace to protect his surgically-repaired knee, has punched in three touchdowns, while Nelson has one.

Cetraro leads the way with six receiving touchdowns. Neil and Sullivan have four, while junior Jacob Olson and fellow tight end Hettick each have three, and West caught two.

Winston and Kameron Moreno each have one.

Butte High’s defense has improved steadily as the season progressed. The unit allowed an average of 11 points per game over the last three games.

Lee has registered four of Butte High’s 18 sacks on the season. Sullivan got in on three and a half, while Kameron Moreno has three and LeProwse has two. Kobe Moreno, Allen, Kingston, Averyt, McClafferty, Raiha, Hollingsworth and junior Dominica Scown all got in on sacks, too.

Huff, Sullivan and Kelly each have two interceptions on the season. Neil and junior Rylan Richards each have one.

Casey Kautzman is also a weapon for the Bulldogs. The sophomore kicker has hit on 5 of 6 field goals and 49 of 54 PATs on the season. Kautzman, who has boomed his kickoffs all season, hit on 43-yard field goals twice. He also connected on a game-winning field goal at Missoula Sentinel.

Other Class AA quarterfinal matchups will send No. 5 Helena Capital to No. 4 Billings West, No. 7 Billings Senior to No. 2 Missoula Sentinel, and No. 6 Helena High to No. 3 Bozeman.

Butte High, the Western AA champions, have homefield advantage locked up for as long as the Bulldogs stay alive.