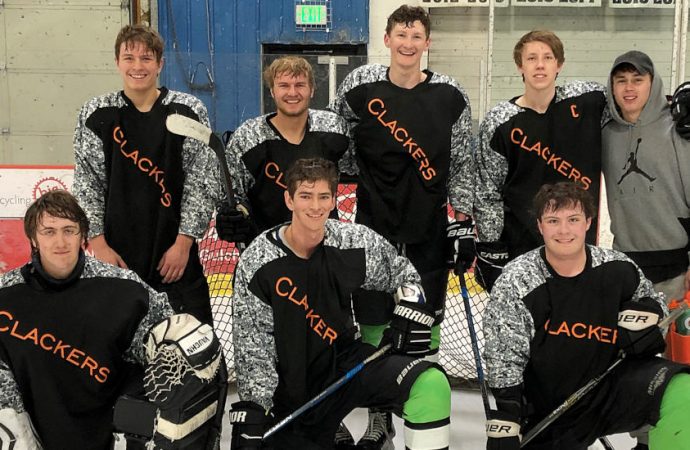 The Clackers are shown in this courtesy photo. They are back row from left, Austin Endy, Robin Bagley, Aidan Francisco, Andrew Kober and Gabe LeProwse; and front row from left, Bryce Stewart, Russell Park, Carsten Quam.

HELENA — A group of local students won the High School Division at the 5th Annual Wyatt Winfield Memorial 3 on 3 Hockey Tournament this weekend.

The team won all four of its games. They rolled to a 22-4 win over the Purple People Eaters of Helena Friday night. On Saturday the Clackers topped the Rail Riders of Salmon, Idaho 11-1, and the Flying Elbows from Billings 5-2, to complete the preliminary round games. In the championship game, the Clackers met the Flying Elbows again, and once again prevailed, this time by a score of 10-6.

No individual statistics are available, but all players contributed goals and assists through the weekend, and Stewart provided a solid performance as the team’s goaltender.

The tournament is held annually in the memory of Wyatt Winfield, a Helena hockey player who tragically died in a car accident in 2013 while playing for the Helena Bighorns Junior A hockey team.

The tournament proceeds go to the Wyatt Winfield Be Tough Memorial Foundation, which benefits both youth activities and education in the trades in the Helena area. This year’s tournament included 65 teams and more than 400 players, in all age groups.