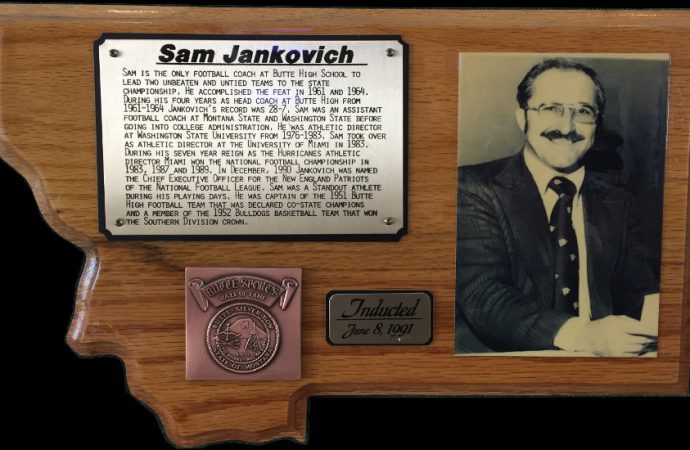 Sam Jankovich's Butte Sports Hall of Fame monument hangs on the wall in the lobby of the Butte Civic Center.

Butte sports legend Sam Jankovich will be inducted into the Montana Football Hall of Fame on today in Billings.

The Montana Football Hall of Fame will induct its third class at 6 p.m. March 24 at the Red Lion Inn. The class has included a Butte native each year.

Sonny Holland was inducted in the inaugural class in 2016, and Bob O’Billovich went in last year. O’Billovich will attend the induction ceremony in Billings and the congratulations gathering at the Civic Center.

Jankovich is the only football coach at Butte High school to lead two unbeaten and untied teams to the state championship. His teams did that in 1961 and 1964.

During his four seasons leading the Bulldogs, Jankovich led his teams to a 28-7 record. He served as an assistant football coach at Montana Staten and Washington before entering college administration.

In December of 1990, Jankovich was named chief executive officer of the New England Patriots. He spent two seasons in New England.

His career concluded as president and general manager as the Las Vegas Gladiators in the Arena Football League.

During his playing career, Jankovich was a captain of the 1951 Butte High football team that was declared co-state champions. He was also a member of the 1952 Bulldog basketball team that won the Southern Division title.

Jankovich was inducted into the Butte Sports Hall of Fame on June 8, 1991.

Everyone is welcome to attend the reception and congratulate Jankovich on his latest honor.

Reservations are not required, but an RSVP would be appreciated. For more information, contact Ray Ueland at 560-7375 or Ray@perkinsmontana.com or Haley Beaudry at 565-1081.