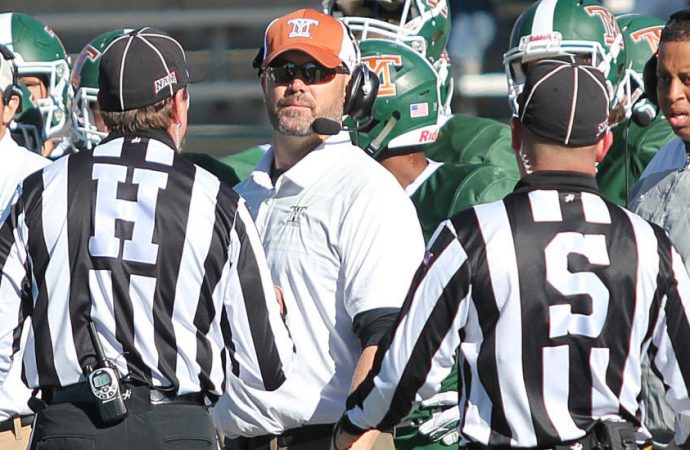 The school announced Monday that Morrell resigned his position. On Friday, Morrell finally got through all that State of California red tape to be officially hired to coach safeties at Fresno State University.

At Fresno, Morrell will work under new head coach Kalen DeBoer. The last time those two worked together, they led the University of Sioux Falls to a 67-3 record and three NAIA national championships in five seasons.

DeBoer was the head coach, and Morrell served as the defensive coordinator and assistant head coach.

Morrell said he did not want to leave his adopted hometown or the Orediggers. This opportunity was just too good to pass up.

“I love Butte so much that there’s only one or two guys in the word I would work for, and Kalen DeBoer is one of them,” Morrell said.

While he is now looking to establish roots in central California, Morrell, a native of Bon Homme, South Dakota, said he, his wife Jen and their daughters Selene and Aleia will be back in the Mining City.

“After second year in Butte, we really fell in love with the place,” Morrell said of Butte. “We said it then, and it couldn’t be more true that it is now. Butte is where we’re going to retire. We love Butte and the whole valley. We’ll be back, that’s a 100 percent guarantee.

“Of any place I’ve ever been, I’ve never been more at home,” Morrell said of Butte. “It definitely fit me and it fit my family. It became our home. I think about how many people in town who have become family members. They were welcoming to us. I think about the people around tow who invited us for Thanksgiving and for Christmas.

“There’s a lot of people in that community who will give you the shirt off their back. That’s what makes Butte so special.”

“When we do have vacation time in the summer, it’s a 100 percent guarantee that we’re going to spend that time in Butte,” Chuck Morrell said.

Morrell was hired in December of 2010 to replace head coach Bob Green, who retired after 24 years leading the Orediggers. He came to town after serving the 2010 as the defensive coordinator at the University of South Dakota.

In nine seasons, Morrell posted a 52-44 overall record with the Orediggers. His teams went 49-41 in Frontier Conference play.

Under Morrell, Tech qualified for the playoffs three times. The Orediggers shared the Frontier Conference title with Southern Oregon in Morrell’s second season in 2012. The Orediggers went on the road and lost to Morningside (Iowa) in the first-round of the NAIA playoffs that season.

Tech’s best seasons under Morrell came in 2015 and 2016, when the Orediggers went 9-1 and won the Frontier Conference titles.

Tech did not regain that playoff form again under Morrell, going 6-4, 5-5 and 6-4 over the last three seasons.

The Orediggers went 32-17 in games at Alumni under Morrell.

Relationships, though, mean way more than that record, Morrell said.

Those relationships include his players, of course, along with assistant coaches, Tech alumni and Oredigger fans.

Morrell has always had a hard time saying goodbye to players. Teary eyes during his nine Senior Days tell that story.

“My hardest day is always Senior Day,” said the coach known for his hard-nosed personality. “I get pretty soft on senior day. I shed some tears on Senior Day every year because I understand how hard it is for kids to commit when they’re 18 years old, be captains four or five years later and then walk out of Tech with a degree.”

“I could go on and on about the guys I got to know,” Morrell said. “Getting the chance to follow coach Green and continue to build those relationship with the guys who played for coach Green was special. There a lot of those guys who I have become friends with.”

Morrell marveled at the players from the 1970s, 1980s and 1990s who still strongly support the Orediggers.

Another legacy Morrell quickly noticed in Fresno is one of the late Jim Sweeney, Fresno’s longtime head coach who got his coaching start at Butte Central.

“There are some deep rooted Butte ties,” Morrell said. “Coach Jim Sweeney, he is the guy who put this program on the map. The stadium and the field are named after him.”

In addition to head coach at Montana Tech, he served as defensive coordinator, secondary coach and, for three years, director of athletics. Now he is in charge of one specific position.

Morrell stepped in as AD to help stabilize the Oredigger athletic department after a couple of hires that did not work out.

“That put dog years on my life, I know that,” Morrell said with a laugh when talking about his AD years.

Morrell has been in California for about a week. He said his family will join him as soon as possible.

The family house is already on the market, and Jen Morrell is tying up the loose ends just like she did when the coach left Sioux Falls for South Dakota and when he left South Dakota for Montana Tech.

“Any time you go through a transition, it is certainly a challenge to the family,” Chuck Morrell said. “My wife is phenomenal. She’s a veteran of the coaching industry.”

While the decision to move on was tough on Morrell and his girls, he said they are all looking forward to the next chapter.

“It’s a challenge for my family, but they’re excited as well,” he said.

The Orediggers have already begun their search for the next coach. Morrell said the new guy will be stepping into a great situation.

“We had a great run there, and I’m excited for the future of Oredigger football,” Morrell said. “It is very difficult to walk away, but it is set up for the future.

“There’s not going to be anything but success there. I’m 100 percent confident that those kids are going to work hard, be successful and go on to have a great life.”