Changes on Leader Board Day 2 at Fairmont

What a difference a day makes for the Butte High Golf tournament!  Thursday the teams played in 90-degree heat with just a little breeze. Today, they started the morning wearing coats with 30 mile an hour winds.

The cold, windy conditions didn’t affect Tyler Avery of Kalispell Glacier. He fired four under par for a 68 on the day, for a total score of 142. It was just enough to take the win by one stroke over Butte High’s Jack Prigge. Prigge shot an even par of 72 to go with his first day 71, for a 143 total.  Avery and Prigge talked during a stop at the 8th green about how much they enjoy golfing together and the friendship they have developed over the years. 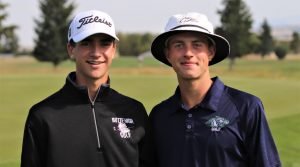 Kalispell Flathead golfer Tyler Williams held his third-place spot from day one, finishing with a 154 score.  Jacob Maroney (155) moved up one spot to fourth.  Butte High Sophomore Brenner Booth jumped from seventh to fifth in the second round shooting a 79 for a 159 total.  Booth was the second Bulldog to card an Eagle in the tournament.  He hit a 10-foot putt on the par 5 Hole #10 on Thursday. 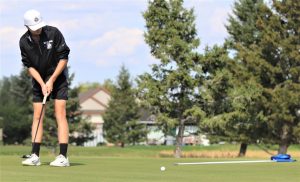 Chase Choquette gave the Bulldogs three golfers in the top ten with a five-stroke improvement. He put up an 85, for a final score of 165.  Gavin Roesti finished the day with an 89 and a 174 two-day total.  Jacob Sawyer rounded out the Bulldog team with a 91 to finish at 179.

The Butte Central Maroon golfer Sam Henderson matched Sawyer at 179 to lead the team.  Will McGree finished the day with a 96 and a 191 for the tourney. Trapper Stajcar replaced Randy Larson in the Maroon line-up for day two and hit a 103.  Kelton Berger wrapped up the team scoring with a 127.

Glacier won the team title with a 639, just two strokes better then the Bulldogs 641.  Missoula Sentinel was a distant third at 660.

The Belgrade Panther girls claimed the team title with a two-day 781 score. Missoula Hellgate remained in second place for the tournament with a 789.  The big move on the team side was by the Butte High Lady Bulldogs, who jumped ahead to third place.  The ‘Dogs were 16 shots behind Glacier after day one and finished the tournament 9 strokes in front of the Wolf Pack.

Dylan Bartoletti finished in a three-way tie for third place with a second day 96, for a 190 total.  Chelsi Lyons cut ten strokes off her first day score with a 98 for a 206 final score.  Taylor Sullivan dropped eight shots for a 100 and a 208.  Kate DeShaw used a chip in from the fringe on the 8th green to finish the day with a 105, improving her day one by 10 strokes. Gussey Lean finished the day with a 110 and the tournament with a 215.

The girls individual title ended in a tie between Missoula Hellgate’s Anna Stensrud and Glacier’s Chloe Tanner, both finishing with a 170.  Stensrud shot an 86 to go with Thursday 84, while Tanner carded an 89 to go with her first day 81.

Dylan Bartoletti tied with two Belgrade golfers for third, Nataly Durham hit back-to-back 95’s for 190. Leila Mamangun added a 97 to her 93 to also end with a 190.